Difference between revisions of "Santiago Cavalry"

The regiment was raised on 15 June 1703, during the War of the Spanish Succession (1701-13) in the Kingdom of Galicia from independent companies. Rosellon Cavalry also contributed one company to the creation of the new regiment. In 1704, the regiment took part in the relief of Ciudad Rodrigo; in 1705, in the relief of Badajoz; in 1706, in the relief of Salamanca and in an incursion in in Portugal; in 1707, in an engagement near Ciudad Rodrigo, and in the siege and capture of Ciudad Rodrigo. In 1708, the regiment patrolled the frontiers of Castile and Extremadura. In 1709, it took part in the Battle of La Gudiña, in the blockade of Olivenza and in several incursions in Portugal under the command of General Montenegro. In 1710, it took part in an expedition in Portugal, in the decisive Combat of Villaviciosa. It later served in various locations in Aragon and Catalonia. In 1711, it took part in the siege and capture of Prats del Rey. In 1713, it fought against partisans in Catalonia and took part in the blockade of Barcelona. In 1714, it continued to serve against the insurgents in Catalonia.

In 1732, the regiment took part in the reconquest of Oran and then returned to Barcelona.

In 1733, at the outbreak of the War of the Polish Succession (1733-35), the regiment marched to Antibes in France to take part in the invasion of Italy. It then sailed from Antibes to La Spezzia in Tuscany, captured the forts of Lunegiana, Venza and Maza and marched to Apulia to join the army. In 1734, the regiment took part in the reconquest of the Kingdom of Naples and in the Battle of Bitonto. In Bari, it was forced to surrender and then retired to Tuscany. In 1735, it took part in the invasion of Lombardy, in the engagement of Quingentalle, and in the siege and capture of Mirandola. It then retired to Tuscany and re-embarked for Spain where it took up cantonments in Igualada.

On July 4 1762, the regiment received orders to march to Extremadura to join the army assembling for the planned invasion of Portugal. From July 6 to August 25, the regiment took part in the siege and capture of Almeida. It then participated in a reconnaissance on Villareal. On September 29, it fought in an engagement at Castel-bom and later in an encounted near Fondon. At the end of the campaign, it retired to Extremadura. 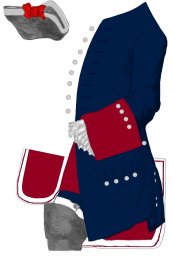