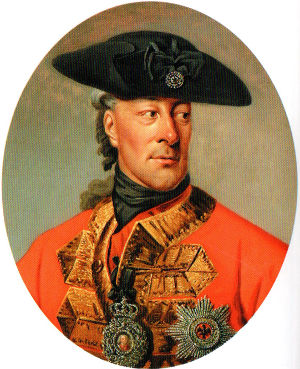 Wilhelm was born on January 9, 1724 in London. His father was Albrecht Wolfgang Count Schaumburg-Lippe and his mother Margarete Gertrud Countess von Oyenhausen (an illegitimate daughter of the British King George I and his mistress Melusine von Schulenburg).

Wilhelm studied in Ghent, Leyden and Montpellier before joining the British army where he served as cadet in king’s Life Guards.

In 1742, after the death of his elder brother, Wilhelm returned to Bückeburg.

In 1743, during the War of the Austrian Succession (1740-48), Wilhelm accompanied his father, who was general in the Dutch service, and took part in the Battle of Dettingen. In 1745, he served as volunteer in the Imperial army of Duke Lobkowitz in Italy.

In 1748, Wilhelm inherited the County of Schaumburg-Lippe. He then went to the court of Frederick II of Prussia to collect some military experiences. During his sojourn in Berlin, he was a member of the circle of Voltaire. Wilhelm knew five languages. During this period, he undertook some journeys to Italy and Hungary.

At the outbreak of the Seven Years’ War, Wilhelm put the contingent of Schaumburg-Lippe-Bückeburg troops under Allied command and was appointed General-Feldzeugmeister (FZM) in the army of Braunschweig-Lüneburg (Hanover).

On August 1, 1759, for the Battle of Minden, Ferdinand of Brunswick appointed Count Wilhelm Lippe-Bückeburg commander of the Hanoverian artillery. Wilhelm distinguished himself greatly in this battle.

In the campaign of 1761, Ferdinand of Brunswick tried to drive the French out of Hesse. In February, Wilhelm Lippe-Bückeburg received the order to besiege Kassel with a small detachment of 7.000 soldiers. He thought that the garrison of Kassel consisted of only 3,000 men, an information which proved wrong. In fact, Charles Francois Comte de Broglie, who commanded the Fortress of Kassel, could count on 8,000 men. FZM Wilhelm Lippe-Bückeburg had not enough material and ammunition, his soldiers suffered on very bad weather, and the trenches were full of water. At the end of March, Ferdinand of Brunswick finally ordered to raise the siege of Kassel. In second the half of the year, Wilhelm Lippe-Bückeburg was charged to improve the system of defence of the triangle Münster – Lippstadt – Hameln.

In 1762, at the outbreak of the war between Spain and France on one side and Portugal supported by British troops on the other, the prime minister of Portugal, Sebastião José de Carvalho e Melo, Count de Oeyras, Marques de Pombal, offered the post of commander of Anglo-Portuguese troops to Wilhelm Lippe-Bückeburg. In July, Wilhelm, promoted to field-marshal, took command of 6,620 men of the British expeditionary corps and of the ill-prepared Portuguese Army. He concentrated the Portuguese army in a camp near Abrantes and started to train the soldiers. One of the problems was, that most of the senior officers were illiterates, the desertion rate was on a very high level and soldiers had no discipline. Wilhelm reorganized this poor army as he could under the circumstances. He established an Academy of war and erected the Fort Nossa Senhora da Garca near Elvas which would later be renamed “Fort Lippe”.

In August 1762, during the Spanish invasion, Wilhelm formed an Anglo-Portuguese corps east of Almeida and placed it under the command of General George Viscount Townshend. This corps was charged to stop any further occupation of Portugal by the enemies. Unfortunately on August 26, the Portuguese garrison of Almeida surrendered and Wilhelm had to concentrate on the defence the line on Tagus River. In October, the Spanish commander Pedro Abarca y Bolea, Count Aranda tried to cross the hills towards Abrantes. Count Lippe-Bückeburg defended the border with his British troops assisted by the local peasantry and practiced the so called “Guerra Fantástica”. In November, Aranda’s troops retired, leaving only 28 battalions in the camp of Castelo Branco. Wilhelm tried to surprise these troops but without success. Later on, the Spanish troops left this camp and marched to Valencia de Alcantára, only wounded and ill remained in Castelo Branco. At the end of November, Aranda unsuccessfully tried to break through near Badajoz. To take up its winter-quarters, the Franco-Spanish army returned to the region of Estremadura.

After the signature of the convention of Versailles, on November 3, 1762, Wilhelm Lippe-Bückeburg returned to his estate in Germany. Due to his merit, Wilhelm was promoted British field marshal.

Wilhelm Lippe-Bückeburg was one of the best artillerist of the XVIIIth century and an expert in systems of defence.

In 1765, Wilhelm married Countess Maria Barbara Eleonore zu Lippe-Biesterfeld, who was twenty year younger than him.

In 1771, Wilhelm and Maria Barbara had a daughter but she died three years later.

In 1775, his book “Mémoires sur la guerre defensive” was published in Stadthagen.

On June 16, 1776, Wilhem’s wife, Maria Barbara died. Wilhelm spent his last years in his hunting-lodge of Bergleben near Wölpinghausen and died there on September 10, 1777. He and his wife are buried in the mausoleum near the hunting-castle Baum in the “Schaumburger Wald”