In 1748, when Wilhelm inherited the County of Schaumburg-Lippe, he immediately began to increase the “Leib-Grenadier-Kompagnie,” which previously counted 70 men (including elderly and invalids, and excluding officers). By October 1749, the company counted 114 men, excluding officers; and by April 1751, 218 officers and men.

In February 1754, the “Garnison-Bataillon Bückeburg” was increased to four companies for a total of 407 men, including officers. In November, a fifth company (a grenadier company) was added to the unit. By September 1755, these five companies of approx. 100 men each (for the first time four of these companies are designated as fusiliers) totalled 465 men, including officers. About 85% of the NCOs and men came from the Principality of Schaumburg-Lippe, while most officers came from other German principalities, France, Hungary, Slovenia and Switzerland.

In April 1756, the five companies of the “Garnison-Bataillon Bückeburg” counted 477, including officers. In August 1756, Count Wilhelm zu Schaumburg Lippe signed a subsidies contract with Hanover by which he agreed to supply an infantry regiment (Schaumburg-Lippe-Bückeburg Infantry aka Fusilier-Regiment) to the Allied army. This regiment was organised in a single battalion of seven companies, each of 114 men, as other Hanoverian infantry regiments. Additional troops were raised to meet this commitment. Furthermore, Count Wilhelm kept two companies: the “Leibgrenadierkompagnie” (Captain von Pastelberger) and another grenadier company (Lieutenant von Zielberg), in his own service, designating them as the “Grenadier-Garde,”

In 1757, when he personally joined the Allied army, Count Wilhelm was allowed to bring with him his “Grenadier-Garde” and his Carabiniercorps, which would both remain at his own disposal.

By March 1758, the unit consisted of 2 companies totalling 123 officers and men:

By December 1758, the two companies were at full strength (108 men, including officers).

In 1760, each grenadier company was equipped with two 1-pdr falconets.

From 1762, the unit was named “Grenadiergarde.”

Throughout the war, the grenadier companies often participated in raids alongside the Bückeburg Carabiniers and the Schaumburg-Lippe-Bückeburg Jägers.

Description of the uniform of 1762 based on Praetorius' document.

Hereafter, we present tentative reconstructions of the colours of Schaumburg-Lippe-Bückeburg Grenadier-Garde at the time of the Seven Years' War. It is mentioned that, during this period, the grenadiers carried two colours.

Warning: these tentative reconstructions are still work in progress and may be modified again.

To recontruct these colours were made several assumptions: 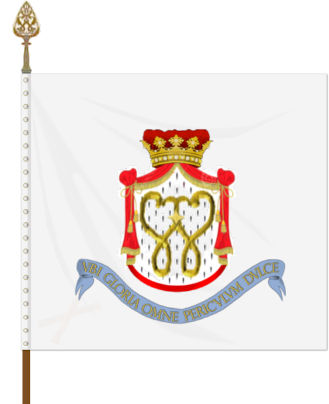 Company Colour: white field; centre device consisting of the crowned arms of Shaumburg-Lippe surmounted by a crown and surrounded by the collar of the Order of the Black Eagle. 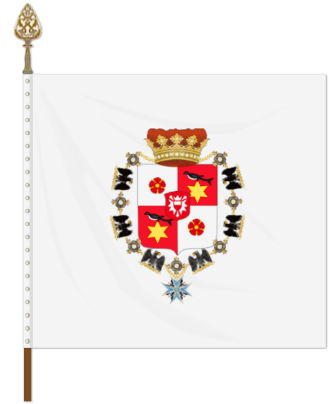