In 1710 and 1711, during thr Russo-Ottoman War, a small Serbian unit under Captain Jovan Albanez distinguished itself in the Pruth River Campaign.

On October 23, 1723, Peter the Great sent Albanez to recruit additional Serbian militiamen in the region of the Habsburg military border. Albanez managed to recruit enough men to create an irregular “Serb Command” under Major Albanez in the Russian service in the region of Kiev.

By 1727, this unit counted 459 Serb hussars and became a distinct hussar regiment. Several hundred Ukrainian Cossacks were transferred to the new regiment to bring it to its planned strength. The regiment served on the borders of the Turkish Empire and of Crimea.

From 1729 to 1731, the regiment was stationed in the occupied provinces of Persia.

In 1741, at the beginning of the Russo-Swedish War (1741-43), the unit was transformed into a regular hussar regiment known as Sérbskiy Hussarskiy (Serbian Hussar). In theory, it then counted 10 companies for a total of about 1,000 men. However, until July 1759, most Russian hussar regiments counted only 6 squadrons. Tielke specifically mentioned this regiment as counting 600 men during this period.

In 1756, at the outbreak of the war, the regiment was stationed at Novgogod and in Livonia. During the winter of 1756-57, it joined the Russian field army.

In 1757, the regiment took part in the campaign in East Prussia under General-in-Chief Count Apraxin. On August 30, at the Battle of Gross-Jägersdorf, it was part of Riazanov's Brigade belonging to the rearguard. When the Russian army deployed, it was placed in the first line of the cavalry right wing.

In January 1758, the regiment took part in the Russian invasion of East Prussia. On February 3, as part of Stoffeln's detachment, it marched to Marienburg (present-day Malbork) and other places on the Vistula under the command of Major Teckeli. On July 21, during the invasion of Brandenburg, the regiment was sent to reinforce a Russian detachment of dragoons and cossacks under Maslov, covering the magazine that was forming at Linei. On August 25, the regiment took part in the Battle of Zorndorf where it was part of the second line of the cavalry right wing. Around 11:45 a.m., it was sent upon Manteuffel's flank and front. Around mid-November, the regiment took up its winter-quarters in Muhlhausen (present-day Mlynary) and Preussisch Holland (present-day Paslek).

On July 23 1759, the regiment took part in the Battle of Paltzig where part of it was attached to Riazanov's Brigade deployed in the vanguard behind the cossacks while the other part was with Morbvinov's detachment which was marching to the Russian camp. A few weeks later, on August 12, the regiment fought in the Battle of Kunersdorf where it was deployed in the reserve of the left wing.

At the beginning of October 1760, during the campaign in Brandenburg, the regiment formed part of Tottleben's Corps who captured Berlin.

During the winter of 1760-61, the regiment was still attached to Tottleben's Corps. When Tottleben was put under arrest, the regiment was attached to Berg's Corps. On October 13 near Gulzow (present-day Golczewo), the regiment, along with the Vengerskiy Hussars, and Tuverov and Colpackov cossacks took part in the unsuccessful assault on a Prussian convoy escorted by 50 grenadiers from Grenadier Battalion 13/26 Schwerin. Captain Schönholz ordered the Prussian convoy to form a Wagenburg and was quickly rescued by Major Potscharly's small force consisting of 300 men from Belling Hussars, 200 volunteers from Grenadier Battalion 17/22 Rothenburg and 1 gun. At Koldemanz, the regiment took part in the capture of major Potscharly's Prussian detachment (300 men of Belling Hussars, 200 volunteers of Grenadier Battalion 17/22 Rothenburg and 1 gun). On October 22, the regiment took part in the indecisive Combat of Gollnow where the Russians took the suburbs but could not advance across the bridge. On November 18 at Labuhn (present-day Łabuń Wielki), the regiment fought with distinction against Finckenstein Dragoons. The regiment took up its winter-quarters in Pomerania. 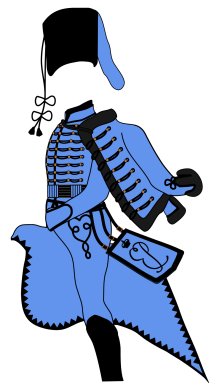 Trumpets and kettle drums were made of brass and decorated with black lace and cords.