The tercio was raised in Madrid on May 1 1661 for the war against Portugal. Its first maestre de campo was Don Diego Fernando de Vera and consequently the unit was designated as the Terdio de Vera. On June 15 of the same year, it took part in the siege of Arronches but was forced to retire under the guns of Albuquerque by the Anglo-Portuguese army. In 1662, the tercio took part in the invasion of Portugal. From May 6 1663, it took part in the siege of Evora. In the night of May 17 to 18, it stormed the fortified Convent del Carmen. On May 22, Evora surrendered. In 1664, the tercio took the name of Tercio Provincial de Toledo. By September 3 1667, the tercio comprised 143 officers, 65 NCOs and 493 soldiers. On June 7 1665, the tercio marched to Borba to prepare the siege of Villavisiosa. Twice, it launched attack against the town only to be repulsed. On June 17, the Anglo-Portuguese relief army finally appeared and an engagement took place. After this battle, the Spanish army retired to Badajoz. In 1667 and 1668, the tercio garrisoned Olivenza.

In 1669, the queen recalled the tercio to Madrid to contain Don Juan of Austria's ambitions. It later joined the Army of Roussillon.

At the start of the Nine Years' War, on August 11 1689, the tercio took part in the engagement of Camprodon against the French. From 1690 to 1694, it then campaigned in Catalonia and Rousillon. From 1694, the unit was designated as Tercio Provincial de los Azules viejo, according to the colour of its uniform. In 1697, the tercio took part in the defence of Barcelona till its capitulation on August 10.

During the War of the Spanish Succession, the tercio was transported to Italy in 1702 and momentarily occupied Capua before sailing back to Spain where it garrisoned Barcelona. In 1705, Barcelona surrendered and, on October 19, the tercio sailed for Almeria from where it marched to Valencia. On February 28 1707, the unit became a regiment and was renamed Regimiento de Toledo. In 1708, the regiment served in the Army of Catalonia. In June 1709, the regiment was increased to two battalions, In 1710, the regiment was transferred to the Army of Castilla and, on December 9, took part in the battle of Villaviciosa. In 1711, it served in the division of Don Juan Antonio Montenegro and, on June 14, took part in the reconquest of Carvajales. The regiment was then transferred to the Army of the Estremadura. In 1712, from September 28 to October 17, it took part in the unsuccessful siege of Campomayor, before taking its winter-quarters in Cáceres. On August 17 1713, the regiment was transferred from Cáceres to Valencia, then to Catalonia to escort the convoys for the blockade of Barcelona. On June 15 1714, the Regimiento de Limburgo was incorporated into the regiment. At the end of the war, on April 20 1715, the disbanded regiment of the Marquis de Villasegura was also incorporated into the regiment.

On October 19 1732, the regiment replaced the Regimiento Vitoria in Ceuta. In 1734, its grenadiers were sent to Gibraltar. In 1737, the first battalion cantoned in Villanueva and the second in Zalamea. In 1738, the entire regiment was transferred to Andalucia.

In 1739, 200 men sailed from Ferrol to Portobello, eswcorting the Viceroy of Santa Fé. From March 13 to April 26, this small force took part in the defence of Cartagena (Colombia) against a British expeditionary force. At the end of the year, the rest of the regiment marched through France and Provence to the County of Nice.

During the War of the Austrian Succession, in 1743, the regiment took part in the invasion of Savoy and in the siege of Chierasco. On July 18 1744, it crossed the Alps. On September 30, it took part to the bloody battle of Madonna del Olmo. It then took its winter-quarters in the County of Nice. In the spring of 1745, the regiment sailed to Genoa and then marched to join the Spanish Army of Italy at Spina on June 8. The first battalion was then detached to occupy Acqui. In 1746, in the night of February 4 to 5, the regiment passed the Ticino. On February 17, it retired to Pavia. On June 16, it took part in the battle of Piacenza. On June 28, it repassed the Po and retired to Genoa and then to the County of Nice. In October, it passed the Var and retired to Provence. At the end of the war, in 1749, the regiment returned to Spain.

In 1756, the regiment was sent to Oran to assume garrison duty.

In 1757, the regiment returned to Spain to garrison Málaga.

In 1760, the second battalion marched to Cádiz where, on December 4, it sailed with the expedition destined to protect the island of Santo Domingo and the city of Havana against a potential British invasion.

In 1762, the second battalion took part in the defence of Havana against a large British expeditionary force. The city surrendered on August 13.

In 1764, the second battalion returned to Spain and the regiment cantoned in Old Castilla. 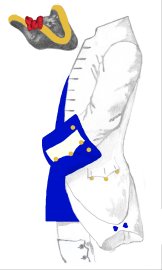 The coronela (colonel flag) of the regiment was white with a red Burgundian cross terminated in each corner by a medallion carrying the arms of the regiment (first and fourth cantons: red field with a golden tower, second and third cantons: white field with a crowned purple lion rampant) surmounted by a golden crown. In the middle: the arms of Charles III surrounded by the necklace of the order of the Toison de Oro (Golden Fleece).

The batallonas (ordonnance flags) of the regiment were white with a red Burgundian cross terminated in each corner by a medallion carrying the arms of the regiment (same as above) surmounted by a golden crown.