In 1757, the unit was renamed “Volontaires de Beyerle”. This unit was well-known within the French Army for its exceptionally handsome looking men. It counted 120 men and consisted of:

On February 1, 1758, the unit was renamed once more, becoming the “Volontaires d'Alsace”. It was significantly increased, then counting 456 men and consisted of:

Following its almost complete destruction near Münden in July 1759, the unit was disbanded on November 22 of the same year. Its remaining troops were incorporated into various units: Volontaires de Flandre, Volontaires du Dauphiné, Volontaires d'Austrasie and Volontaires du Hainaut.

By August 1, 1757, the unit was garrisoning Domène et Crolles in Dauphiné.

On January 27, 1759, when the marquis d'Armentières was informed of prince Henri's movements against the Austro-Imperial army in Thuringia, he sent Fischer and Schomberg ahead with the Volontaires d'Alsace. On April 13, the unit took part in the battle of Bergen where it was deployed en tirailleur in the woods near Vilbel in front of the Saxon line. On April 19, Broglie sent the Volontaires d'Alsace under M. de Beyerle towards Fulda by Büdingen. In May, Broglie sent the unit to Lohr am Main to hinder the Allied manoeuvres in Franconia. In June, at the beginning of the French offensive in West Germany, the unit (estimated at 456 men) was part of the “Right Reserve” under the command of the duc de Broglie who had taken position at Friedberg in Hesse. On July 19 1759, the unit was attacked by Freytag's light troops near Münden. The unit was completely destroyed, some 200 men, including colonel Beyerle, were made prisoners, most of the remainder were killed. The unit was disbanded on November 22.

Although dragoons are not mentioned specifically in the contemporary Etats Militaires, they probably wore uniforms similar to those of the fusiliers.

Ordonnance flag (until 1757): white St. Andrew cross; each canton subdivided into a red and a blue triangles. 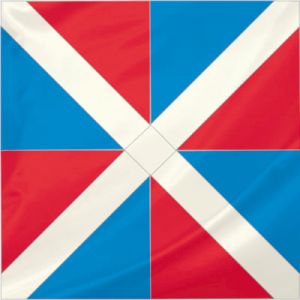 Ordonnance flag (from 1757 to 1759): white cross; each canton subdivided itself into 4 smaller cantons each formed by red and a blue triangles. 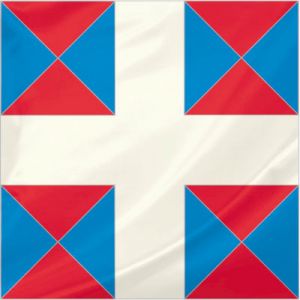