In 1686, during the Morean War (1684-99), the regiment was sent to Greece to assist the Venetians in the conquest of Morea. In 1687, it took part in the siege of Patras and in the siege and capture of Athens; and in 1688, in the capture of Monemvasia.

In 1692, during the Great Turkish War. The regiment was sent to Hungary and took part in the capture of Grosswardein. In 1693, it was at the siege of Belgrade. In 1694, it returned to Hanover.

In November 1715, the regiment was placed in garrison at Maastricht. In 1716, it returned to Hanover.

In 1719, the regiment took part in the incursion in Mecklenburg and in the action of Wallsmühlen against the Russians and the Mecklenburgers.

In 1734, during of the War of the Polish Succession (1733-35), the regiment formed part of the Hanoverian contingent of 6 battalions who joined the Imperial army on the Rhine. In 1735, it took part in the action near Kloster Clausen on the Schwalmbach. In 1736, it returned to Hanover.

On May 11 1756, George II sent a message to both houses of the Parliament to request funding for the defence of the country. The Parliament granted him one million pounds. Meanwhile, from May 11 to 14, a Hanoverian contingent of 12 battalions (including the present regiment) gradually embarked aboard 21 British transports at Stade for the reinforcement of Great Britain. On May 22, the Hanoverian contingent disembarked in England. At the beginning of November, it became clear that Brunswick-Lüneburg (aka Hanover) was more seriously threatened than England and it was decided to gradually send the Hanoverian contingent back to the continent.

At the beginning of March 1757, the last Hanoverian battalions (including the present regiment) disembarked at Cuxhaven and returned to their respective garrison places. On July 26, during the French invasion of Hanover, the regiment took part in the Battle of Hastenbeck where it was deployed in the second line of the left wing. In September, it was with the Allied army when it capitulated at Stade. At the end of November, after the disavow of the capitulation by George II, the regiment took part in the Allied counter-offensive in Hanover and in the expedition against Zell. It then took up its winter-quarters at Ebstorf.

In March 1758, during the Allied winter offensive in Western Germany, the regiment took part in the siege and recapture of Minden under Lieutenant-General Oberg. On March 14, Minden surrendered. On May 26, the regiment was with Ferdinand's main force in the camp of Nottuln. On May 31, it accompanied Ferdinand in his offensive on the west bank of the Rhine. On June 23, the regiment took part in the Battle of Krefeld where it was deployed on the right wing in the brigade of the Erbprinz (Hereditary Prince) of Brunswick. At 1:00 p.m., this brigade launched an attack against the wood held by Saint-Germain's Division. In this battle, the regiment lost 5 officers and 193 men killed or wounded, including the following officers who had been wounded: Captain von dem Busche, Captain Zimmermann, Captain von der Horst, Lieutenant Scholvien and Ensign Hassebroick. On October 10, the regiment fought in the Battle of Lutterberg where it was deployed the first line of the centre as part of Diepenbroick's Brigade. Major von Winzingerode was mortally wouned during this battle.

In June 1759, the regiment was part of the main Allied army under the command of Duke Ferdinand of Brunswick. On August 1, the regiment took part in the Battle of Minden where it was deployed in the first line of the 6th column under Major-General von Toll. It brought a very timely support to the British infantry advancing straight upon the cavalry deployed on the left of the French centre. The regiment later took up its winter-quarters at Gleyberg.

In February 1760, the regiment was transferred to new winter-quarters in Homburg. At the end of March, it marched towards the Fulda. On July 10, it took part in the Combat of Corbach where it was deployed in the right column under Lieutenant-General Count von Kilmannsegg. It suffered heavy losses in this engagement.

On November 5 1761, the regiment took part in the engagement near Einbeck where Captain Harling was promoted to major for his conduct..

By May 23 1762, the regiment was attached to Granby's Corps forming the left wing of the Allied army towards Dörnberg. It belonged to Colonel von Ahlefeld's Brigade. On June 24, the regiment took part in the Battle of Wilhelmsthal. 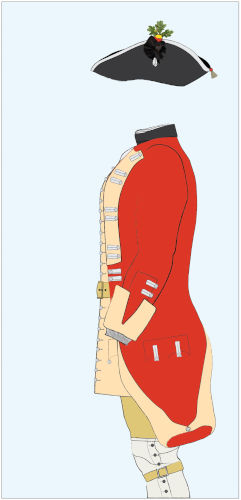 The drum pattern had hoops in alternating straw and red diagonal stripes, white drum cords over a brass drum with the Arms of Hanover in the centre.

Regimental Colour: pale straw field; centre device consisting of an allegory depicting Fame with a trumpet flying over a trophy of arms; Fame is holding a scroll carrying the motto EXTENDERE FACTIS; flag bordered by seashells and possible nautical emblems; corner devices consisting of a cypher and a crown. Hereafter, we present an illustration from the Reitzenstein Sammlung, dating from circa 1761 (left) and the interpretation of Hannoverdidi (right).