First president of the United States of America (1787-97) 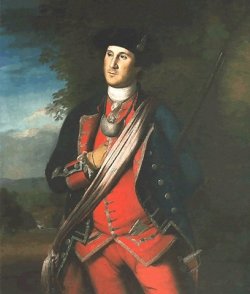 George Washington as colonel of the Virginia Regiment

From 1735 to 1739, George Washington lived at what is now called Mount Vernon, and afterwards at the estate on the Rappahannock.

Washington had a boy's life which was markedly different from that common to Virginia families in easy circumstances; plantation affairs, hunting, fishing, and a little reading making up its substance. His education was only elementary and very defective, except in mathematics, in which he was largely self-taught. He was never an assiduous reader.

In the autumn of 1747, Washington left school. He was then at Mount Vernon with his half-brother Lawrence, who was also his guardian.

In 1748, Whashington, then only 16 years of age, was appointed surveyor of the Fairfax property and an appointment as public surveyor soon followed. The next three years were spent in this service, most of the time on the frontier.

In 1751, George Washington accompanied his half-brother Lawrence, who was stricken with consumption, to the West Indies, where he had an attack of small-pox which left him marked for life.

In 1752, Lawrence Washington died, making George executor under the will and residuary heir of Mount Vernon.

In October 1753, Washington was chosen by Governor Robert Dinwiddie as the agent to warn the French away from their new posts on the Ohio. He accomplished the winter journey safely. Shortly after his return, he was appointed lieutenant-colonel of a Virginia regiment, under colonel Joshua Fry.

In April 1754, Washington was sent to conduct operations on the Ohio River with two companies. On May 28, he defeated a force of French and Indians at Great Meadows (in actual Fayette county, PA). However, at the beginning of summer, he was forced to capitulate at Fort Necessity.

In February 1755, when General Edward Braddock arrived in Virginia, Washington was presently made a member of Braddock's staff, with the rank of colonel. He then took part in the disastrous expedition against Fort Duquesne where Braddock's force was ambushed and utterly defeated in an ambush on the Monongahela River. During this combat, Washington distinguished himself, ranging the whole field on horseback. By his behaviour, he probably saved the expedition from total annihilation and managed to bring the remnant of his Virginians out of action in fair order. In spite of his reckless exposure, he was one of the few unwounded officers. In August, after his return, Washington was at 23 years old commissioned commander of the Virginia forces.

In 1756, Washington had to defend a frontier of more than 500 km with 700 men. The task was very difficult due to the insubordination and irregular service of his soldiers. The situation was further complicated by irritating controversies over official precedence. Washington made a journey to Boston to confer with Governor William Shirley on this question of precedence.

In 1757, Washington continued to patrol the frontier. During the winter, he had health problem.

From April to November 1758, Washington took part in a new and more successfull expedition against Fort Duquesne under the command of Forbes. On November 24, the French blew up the fortifications of Fort Duquesne and retreated upstream on the Alleghany River to Fort Venango. Forbes occupied the ruins of the fort on November 28. At the end of the year, Washington resigned his commission, the war in Virginia being at an end.

In January 1759, Washington married Martha Dandridge, widow of Daniel Parke Custis. His marriage brought him a large increase in his property, making him one of the richest men in the colonies. Washington then established himself in the family estate of Mount Vernon. For the next fifteen years Washington's life at Mount Vernon was that of a typical Virginia planter. He developed his plantation and enlarged its extent. Like others of the dominant planter class in Virginia, he was repeatedly elected to the House of Burgesses.

In 1761, the estate of Mount Vernon became the property of George Washington.

In 1765, as a member of the House of Burgesses, Washington opposed Stamp Act.

In May 1770, when the House of Burgesses was dissolved, Washington was among the members who met at the Raleigh tavern and adopted a non-importation agreement.

On August 5 1774, the Virginia convention appointed Washington as one of seven delegates to the first Continental Congress, which met at Philadelphia on September 5. On the adjournment of the Congress, he returned to Virginia where he continued to be active, as a member of the House of Burgesses, in urging on the organization, equipment and training of troops.

In March 1775, Washington was appointed a delegate from Virginia to the second Continental Congress, where he served on committees for fortifying New York, collecting ammunition, raising money and formulating army rules. The war began in Massachusetts, troops from New England flocking to the neighbourhood of Boston almost spontaneously. But the resistance, if it was to be effective, must have the support of the colonies to the southward. Washington, as the Virginia colonel who was serving on all the military committees of Congress and as an experienced military during the Seven Years' War, was the obvious as well as the politic choice. When Congress, after the fights at Lexington and Concord, resolved that the colonies ought to be put in a position of defence, the first practical step was the unanimous selection on June 15 of Washington as commander-in-chief of the armed forces of the United Colonies. Refusing any salary and asking only the reimbursement of his expenses, he accepted the position. On June 17 1775, Washington was thus commissioned. He set out at once for Cambridge, Mass. On July 3, he took command of the levies there assembled for action against the British garrison in Boston. Preparing for the next campaign, he tried to bring about some semblance of military organization and discipline, to collect ammunition and military stores, to correspond with Congress and the colonial authorities, to guide military operations in widely separate parts of the country, to create a military system for a people entirely unaccustomed to such a thing, and to bend the course of events steadily towards driving the British out of Boston. He planned the expeditions against Canada under Richard Montgomery and Benedict Arnold, and sent out privateers to harass British commerce.

In March 1776, Washington drove the British out of Boston. He led the American troops throughout the American War of Independence until the campaign of Yorktown, conceived by himself, and the surrender of Cornwallis (October 1781). Although peace was not concluded until September 1783, there was no more important fighting. Washington retained his commission until December 23 1783, when he returned it to Congress. He then retired to Mount Vernon.

When the Federal Convention met at Philadelphia in May 1787 to frame the constitution, Washington was present as a delegate from Virginia, and a unanimous vote at once made him the presiding officer. As president of the convention he signed the constitution. The unanimous vote of the electors made him the first president of the United States. He was elected for a second term in 1792-1793. He supported Hamilton's financial plans which insured a speedy restoration of public credit.

In 1797, Washington retired from the presidency and returned to Mount Vernon. At Mount Vernon, which had suffered from neglect during his absence, he resumed the plantation life which he loved, the society of his family, and the care of his slaves. He had resolved some time before never to obtain another slave, and "wished from his soul" that Virginia could be persuaded to abolish slavery.

In 1798, Washington was made commander-in-chief of the provisional army raised in anticipation of war with France. In the midst of these military preparations, he was struck down by sudden illness, which lasted but for a day, and died at Mount Vernon on December 14 1799. His will contained a provision freeing his slaves and a request that no oration be pronounced at his funeral. He was childless.

This article incorporates texts from an article from the following encyclopaedia which is now in the public domain: