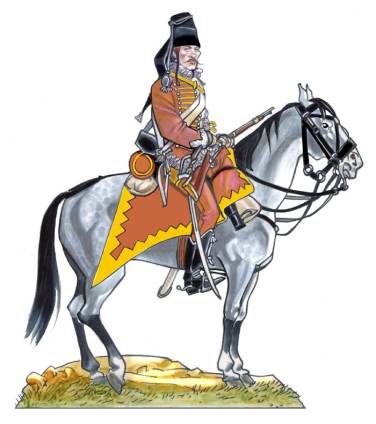 The regiment was raised in 1741 from new recruits in Breslau and Ohlau. It counted 10 squadrons. In 1743, the regiment contributed 2 squadrons for the formation of Dieury Hussars.

The regiment was often referred to as die Kapuziner (the Capuchins) or the Fleischhacker (the butchers because brown was the colour of the guild of the butchers).

During the War of the Austrian Succession, in 1744, the regiment fought in the combat of Ratibor where it defeated a much superior force. In 1745, the regiment took part in a skirmish at Planitz on February 14; an ambush at Hirschberg on March; the battle of Hohenfriedberg on June 4; and the battle of Kesselsdorf on December 15.

The regiment was attached to the inspectorate of Upper Silesia. On the eve of the Seven Years War, its garrison places in Upper Silesia were Loslau, Beuthen, Peiskretscham, Ujest, Gleiwitz, Rybnik, Sorau, Nicolai and Berun.

The numbering system (Stammliste) was first used by Leopold I., Fürst von Anhalt-Dessau (Der alte Dessauer) in the Dessauer Spezifikation from 1737. Around 1780 the numbers were used in the printed Stammlisten. It became official by "Cabinets-Ordre" from October 1, 1806. The present hussar regiment was attributed number 6.

In 1756, the regiment was part of the army of Silesia under field-marshal Schwerin. During this campaign, this army remained on the border between Silesia and Bohemia. The regiment took part in a skirmish near Königgrätz where they were attacked by 2,000 Austrian cavalry, but drove them off and took almost 800 prisoners. The then Chef, colonel von Wechmar was detached by Schwerin with 250 of the regiment to conduct a raid behind enemy lines. They were detected by a larger Austrian force near Reichenau on October 10 and attacked, but were able to overthrow the Austrians completely for very little loss and to rejoin the army.

In March 1758, the regiment took part in the invasion of Moravia. On July 25, during the Prussian retreat, the regiment escorted the bakery, the supplies and the ambulance as part of Rebentisch's detachment. The convoy crossed the Mettau and stopped at Dolskow. On October 10, 5 squadrons of the regiment fought in the battle of Hochkirch where they formed part of Retzow's Corps near Weissenberg. They were deployed on the road of Roth-Kretscham. They were among the first units of Retzow's corps to come to the relief of Frederick's left wing, charging and driving back Austrian cavalry units. On October 24 at 6:00 pm, the regiment was part of the vanguard of Frederick's army who marched on Drehsa (does not correspond to the general direction of the movement, more probably Brösa), crossed the Spree at Geisslitz, turned right and advanced through Weigersdorf, Gross Radisch and Diehsa up to the camp at Ullersdorf. On October 25, the regiment was hurrying to the relief of Neisse, when, at Landskrone near Görlitz it charged a superior Austrian cavalry force and defeated them, taking over 500 prisoners.

On June 23 1760, 5 squadrons of the regiment took part in the combat of Landeshut where they saved a gun. During a skirmish near Neumark in Silesia, the regiment attacked two Austrian dragoon regiments and scattered them. On September 5, the regiment was sent to Pomerania to the relief of Colberg from the Russians and Swedes. On September 18, Werner's corps arrived near the Russian entrenchments. He had marched 320 km in 13 days. Upon his arrival, he immediately attacked a small Russian detachment (about 300 men and 1 gun) on the Kauzberg hill near Sellnow (actual Zieleniewo). This Russian detachment defended a small redoubt covering a bridge. Some 200 men from the Wunsch and Courbière freikorps first skirmished with these Russian troops. Then, Werner Hussars advanced and captured 160 men and the unique gun of this redoubt. The rest of the detachment were killed or wounded. The unexpected arrival of Werner's force created panic in the Russian camp. All the infantry was immediately evacuated. Part of it re-embarked while another retired towards Koslin (actual Koszalin). All siege tools, supply, ammunition and several artillery pieces were abandoned on the spot. The Prussians thus captured 15 heavy guns (from 24 to 36-pdrs), 5 howitzers, two mortars and 2 3-pdrs guns. The king awarded seven medals to the regiment for gallantry. 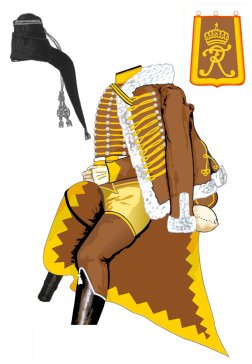 Troopers were armed with a short, curved sabre, two pistols and a carbine. They rode brown or white-grey horses. 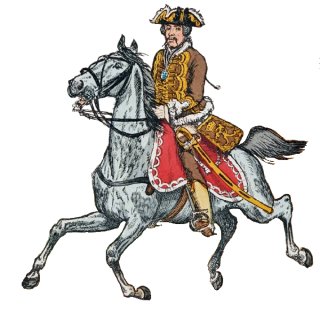 NCOs wore uniforms similar to those of the troopers with the following exceptions: