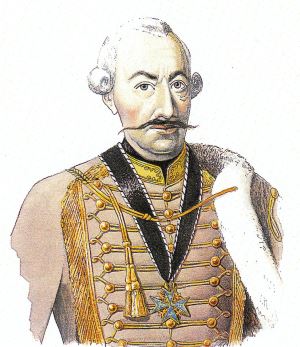 Paul Werner was born on December 11 1707 at Györ in Hungary. His father was Johann Paul Werner “Obristwachtmeister” in k. k. hussar regiment “Ebergényi”, his mother was Maria Katharina von Streit.

By 1731, Werner was cornet in the “Franz Nádasdy Hussars”.

In 1734, during the War of the Spanish Succession. Werner was captured by the Spaniards at the battle of Bitonto in Italy.

On April 10 1741, during the War of the Austrian Succession (1740-48), Werner and his regiment fought in the Battle of Molwitz. After this battle, there were rumours that Werner had had the opportunity to capture King Frederick II but failed to do so. If these rumours were true, they might explain why Werner remained captain.

In 1750, feeling discriminated, Werner left the Austrian service. He probably met the Prussian Major-General Karl von Winterfeldt at the spa of Karlsbad1 (present-day Karlovy Vary/CZ). Winterfeldt persuaded him to enter in the Prussian service and recommended him to Frederick II.

On December 3 1751, very pleased to acquire the services of such a capable hussar officer, Frederick appointed him aggregierter Obristlieutenant (second lieutenant-colonel) in the Wechmar Hussars.

In December 1753, Werner was promoted to the command of a squadron.

On August 20 1756, just before the outbreak of the Seven Years' War, Paul von Werner married Anna Maria Dorothea von Schimonsky who owned the estate of Prisowitz (present-day Przyszwice/PL) and Pojanow in Silesia (heritage of her father Ludwig Jaroslav von Schimonsky). Five sons were born from this marriage but only one (August Albrecht Joseph Ludwig who was born on January 23 1763) survived his father. By then, Werner already was commander of the Wechmar Hussars who were attached to the army of Field-Marshal Schwerin. The same year, during Schwerin's operations in Eastern Bohemia, Werner distinguished himself in a raid into Bohemia, behind the Austrian corps of FZM Piccolomini and in the ensuing combat near Smirsitz (present-day Smiřice/CZ).

In February 1757, Werner was promoted Chef' of the former Wechmar Hussars who thus became known as “Werner Hussars”. During the entire Seven Yeras' War, this regiment retained a very good image in the Prussian Army. In the Spring, during the Prussian invasion of Bohemia, Werner distinguished himself in the Battle of Prague (May 6) and in the Battle of Kolin (June 18). In the latter battle, he was with the cavalry of the left wing which took part in the first attack and later covered the defeated army during its retreat. His regiment then went to Upper Lusatia and later joined the army of the Duke of Bevern in Silesia. On November 22, Werner and his regiment, serving under Zieten, distinguished themselves again in the Battle of Breslau (present-day Wroclaw/PL). On December 5, in the Battle of Leuthen, Werner and his hussars drove back the Austrian vanguard led by Major-General Nostitz.

In the Spring of 1758, Werner took part in the invasion of Moravia. In July, after the failure of the siege to Olmütz, Werner commanded the rearguard during the retreat of the Prussian army. In September, Frederick unexpectedly promoted Werner to major-general and awarded him the Pour-le-Mérite. In October, when Frederick came to the rescue of the Fortress of Neisse (present-day Nysa/PL), Werner attacked an Austrian converged regiment of horse grenadiers on the march. He then forced the Austrians to lift the Siege of Cosel.

During the Spring of 1759, Werner managed to drive General de Ville out of Silesia.

During the campaign of 1760, Werner commanded different detachments. In August, he attacked the Austrian Erzherzog Joseph Dragoons, almost annihilating them. King Frederick gave him a present of 2,000 talers. In August, after the unsuccessful Siege of Breslau by the Austrians, Werner received command of a corps (Werner Hussars, 3 bns and 150 dragoons) and and was sent to the relief of Colberg which was besieged by the Russians. On September 5, he left Glogau. On September 18, he arrived at Colberg, immediately attacking the Russians. On September 19, the Russians lifted the siege, their infantry re-embarking aboard ships, their cavalry fleeing towards Poland closely followed by the Werner Hussars. At the end of 1760, Werner put an end to the Swedish campaign in Pomerania and in the March of Brandenburg driving them back behind the Peene River.

On February 20 1761, as a reward for his succesful actions, Frederick II appointed Werner lieutenant-general. In addition, he gave him the title of provost of the church at Minden with an annual income of 2,000 talers per year. For the campaign of 1761, Werner was once more attached to the corps of the Prince of Württemberg who managed to reinforce the Prussian troops charged with the defence of Colberg against the Russians. Würrtemberg escaped Colberg and vainly tried to resupply the defenders with provisions. Meanwhile, Werner and his hussars ceaselessly manoeuvred to confuse the Russians. In September, Werner left the camp of the Prince of Württemberg at the head of a detachment and to make a junction with Platen's Corps. On his way, on September 12,Werner was intercepted by a Russian force near Treptow an der Rega. In this engagement, his horse was shot under him and Werner was taken prisoner. The Russians brought him to Königsberg (present-day Kalinigrad/Russia) where he was imprisoned until 1762.

In January 1762, when Peter III succeeded to Elizabeth Petrovna on the throne of Russia, he called Werner to St. Petersburg and tried to persuade him to enter in the Russian service. Werner declined his offer and returned to Prussia. Frederick II gave him a special corps and Werner marched from Upper Silesia to Moravia. On August 16, under the Duke von Bevern, Werner made a famous attack during the Battle of Reichenbach, a feat witnessed by the king. In this battle, the Austrian Field-Marshal Daun lost some 3,500 men and was driven away from Schweidnitz. Afterwards, Werner's troops were deployed in a cordon along the Silesian border. He did not see further action during the Seven Years' War.

After the Peace of Hubertusburg of 1763, Werner became one of Frederick's favorite generals.

In October 1767, Werner received an extraordinary annual salary and the title of a captain (Amtshauptmann) of Naugarten.

During the War of the Bavarian Succession (1778-79), Werner was, together with Lieutenant-General von Stutterheim, commander of an “Observationkorps“. Werner Hussars defeated a detachment of Austrian cavalry near the village of Tetschen.

1. in wartime Karlsbad was a sort of neutral place where officers from all belligerent states spent their vacations. One notable exception to this tacit agreement was the capture of Austrian officers by the Prussian General Kleist (aka Green Kleist). His action caused some diplomatic complications between parties.