In 1724, the regiment was subdivided in two distinct regiments. The first battalion forming Sebo Infantry (the object of the present article) and the second, Ranzow Infantry.

In 1733, the regiment was sent to Mecklenburg to quench troubles. The sane year, at the outbreak of the War of the Polish Succession (1733-35), it formed part of the Hanoverian contingent of 6 battalions who joined the Imperial army. In 1734, it joined this army on the Rhine. In 1735, it took part in the action near Kloster Clausen on the Schwalmbach. In 1736, it returned to Hanover.

In 1742, during the War of the Austrian Succession (1740-48), the regiment joined an Imperial army in the Netherlands. In 1743, it campaigned on the Main and took part in the Battle of Dettingen. In 1744, as part of General Wade's Army, it advanced up to Lille but soon returned to the Netherlands. In 1745, it was sent to the Rhine. In 1746, it returned to Hanover. In 1747, it campaigned on the Lower Rhine. In 1748, it fought in the combat of Rosenthal near Berg-op-Zoom.

The successive regimental inhabers were:

On July 26 1757, during the French invasion of Hanover, the regiment took part in the Battle of Hastenbeck where it was deployed in the detachment posted between Afferde and Diedersen. This detachment executed an outflanking movement against the French offensive at Hastenbeck and caused near panic among the French towards the conclusion of the battle. During the retreat, it formed part of the rearguard.

On May 26 1758, the regiment was part of Wangenheim's Corps encamped at Dorsten. On May 31, this corps accompanied Ferdinand of Brunswick in his offensive on the west bank of the Rhine. On June 18, Wangenheim's Corps passed the Rhine at Duisburg. On June 23, the regiment took part in the Battle of Krefeld where it was deployed on the right wing in the brigade placed under the command of the Erbprinz (Hereditary Prince) of Brunswick.

In June 1759, the regiment was once more part of Wangenheim's Corps who had taken position at Dülmen in Westphalia to observe the movement of a French corps under the Marquis d'Armentières. On August 1, the regiment took part in the Battle of Minden where it was deployed in Wangenheim's Corps between Kutenhausen and the Weser, in the first line of the infantry centre. The regiment helped assault the village of Totenhausen on the right flank. It later took part in the siege of Münster.

In 1760, the regiment took part in the affair of Dillenburg where Lieutenant von Weyhe was killed. The regiment then took up its winter-quarters in Erwitte. On September 19, as part of Wangenheim's Corps, it took part in the combat of Löwenhagen against superior French force. It was detached before the engagement to protect communication with Uslar. It was then allocated to Lückner's Corps and took position at Northeim and Moringen to keep the garrison of Göttingen at bay. At the beginning of winter, it marched towards the Eichsfeld region and drove the enemy out of Duderstadt and Gieboldehausen. It then took up its winter-quarters in Duderstadt.

On January 2 1761, the regiment was forced to evacuate Duderstadt but it took position on neighbouring heights. On February 15, it took part in the Combat of Langensalza where it was deployed in General von Spörcken's Corps. On March 21, the regiment fought in the engagement of Grünberg. On July 16, it took part in the Battle of Vellinghausen where it was attached to the Reserve.

By May 23 1762, the regiment served in the Corps of the Hereditary Prince of Brunswick operating in Westphalia. In July, it took part in the attack across the Fulda. On August 30, it fought in the combat of Nauheim where it was deployed in Lieutenant-general von Hardenberg's Column. In this action, Lieutenant-Colonel de la Porte, Major von Puffendorf and Captain von Melzing were wounded. On September 21, the regiment fought in the combat of Amöneburg where it was deployed in Zastrow's Corps occupying the ground immediately before the Brücker Mühle (Zastrow commanded in the absence of Lieutenant-general Hardenberg).

In 1763, after the signature of peace, the regiment garrisoned Hameln where it would remain until 1768. 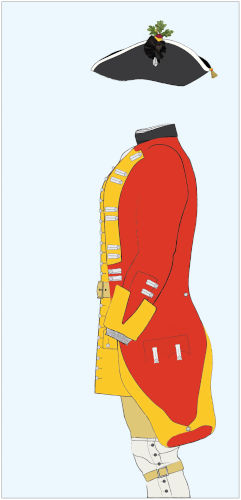 N.B.: some sources indicate buff as the distinctive colour.

Regimental Flag: Dark yellow field. Mars seated on a trophy of arms above flies the spirit, Fame, above which is a scroll with the inscription NULLI SINE MARTE TRIUMPHI. Hereafter, we present an illustration from the Reitzenstein Sammlung, dating from circa 1761 (left) and the interpretation of Hannoverdidi (right).