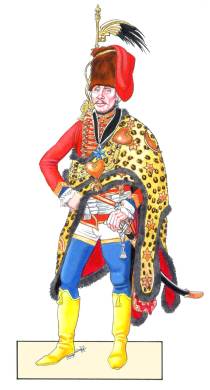 Zieten was the son of a landowner.

In 1715, Zieten began his military career as a volunteer in the infantry regiment von Schwendy. During his ten years of service as an infantryman, he vainly requested a promotion four times. His small stature (1,60 m) did not serve him well to aspire to such a promotion.

In 1726, Zieten reenlisted as lieutenant in the Prussian dragoon regiment von Wuthenau. He soon quarreled with his squadron-commander whom he provoked in duel. The punishment of Zieten for this encroachment was a detention of one year in a fortress. However, as soon as he was freed, he provoked his superior in duel once again and was discharged.

In 1730, Zieten managed to be reinstated into the newly formed hussar regiment Beneckendorff. He soon showed talents as a cavalryman and found several affinities with his new comrade of arms.

In 1735, during the War of the Polish Succession, Zieten served as squadron commander under the Austrian General Baronay for the Rhine campaign against France. This gave him the opportunity to learn light cavalry work from the only army who really mastered it during this period.

In January 1736, Friedrich Wilhelm I of Prussia promoted the now experimented Zieten as major of the "Leibkorps Husaren".

In 1741, at the start of the First Silesian War, Zieten was promoted lieutenant-colonel. On May 17, he met his old teacher Baronay in an engagement near the Castle of Roth, not far from Mollwitz. Zieten charged 1,400 Austrian cavalrymen at the head of 600 hussars. He broke and routed the Austrians. A few days later, Baronay sent him a complimentary letter. Furthermore, Winterfeldt who was in command at Roth reported favorably upon Zieten's conduct. Frederick II was informed of Zieten's feat of arms and gave him the "Pour le Mérite" medal. He also made sure that he got promoted. Indeed, on July 24 of the same year, Zieten became colonel of a new hussar regiment (Zieten Hussars).

During the short peace between the First and Second Silesian War, as the other Prussian cavalry units, the hussars were completely overhauled. They now combined an iron discipline with the dash and skirmishing qualities of the best irregulars. From then, the Prussian hussars were considered the best of their arm in Europe.

On September 24, 1744, at the beginning of the Second Silesian War, Zieten was promoted to major-general. Soon after, he fought the brilliant action of Moldaustein.

In 1745, Zieten at the head of 500 hussars led the now legendary Zietenritt, a 22 hours long cavalcade round the enemy's lines with the object of delivering the king's order to Margrave von Schwedt at Jägerndorf in Upper-Silesia. Zieten resorted to a ruse, disguising his regiment as an Austrian unit and following an Austrian dragoon regiment along its way towards Jägerndorf. When his ruse was finally discovered, Zieten managed to escape and to reach Jägerndorf. He had accomplished his mission while loosing only 3 hussars dead, 20 wounded and 2 missing. This allowed von Schwedt to make his junction with the main army just in time to fight the victorious battle of Hohenfriedberg on June 4.

In the last years of the Second Silesian War, Zieten Hussars distinguished themselves at Striegau and Hennersdorf.

During peacetime, the Prussian army did not rest on its laurels and continued to train intensively. Zieten was charged with the reorganization of the Prussian cavalry. Besides their usual role as light cavalry, Frederick II asked von Winterfeldt to train hussars to line cavalry tactic. Thus, they learned to attack in linear close formations.

On August 12, 1756, in the first months of the Seven Years' War broke out, Zieten was promoted to lieutenant-general.

In 1757, Zieten assumed important commands during the Combat of Reichenberg (April 21) and the Battle of Prague (May 6). On June 18 in the Battle of Kolin, Zieten led the left wing of cavalry. In this disastrous defeat, his wing was the only victorious corps of troops of the Prussian army. On December 5 in the Battle of Leuthen, Zieten's cavalry began the fighting and later concluded the battle by its decisive attack on the open flanks of the Austrians.

On August 15, 1760 in the Battle of Liegnitz, Zieten contained the main Austrian army. Frederick promoted him to general of cavalry on the battlefield. On November 3 at the Battle of Torgau, Zieten misdirected the frontal attack on the Austrian positions. This was almost the only error in his career. However, he redeemed his mistake by his lightning attack on the Siptitz Heights, which eventually decided the day.

In 1763, after the Peace of Hubertusburg, Zieten went into retirement in Berlin and Wustrau. His health did not allow him to assume active service during the campaign of 1778.