Since the beginning of the Imperialist invasion of Northern Italy, Maréchal Catinat had continuously let the initiative to Prince Eugène de Savoie, retiring successively behind the Adige, the Canalbianco, the Oglio, the Mincio... In August, exasperated by Catinat's continual temporizing, Louis XIV sent Marshal de Villeroy to supersede him with strict orders to attack and defeat the numerically inferior Imperialist army on the first occasion.

On 29 August, Villeroy's army passed the Oglio unopposed at Pumenengo and encamped on the opposite bank at Rudiano.

On 30 August, the Imperialists took position between Chiari and Urago.

On 31 August, the Franco-Spanish army threw bridges on the Trenzano Canal. 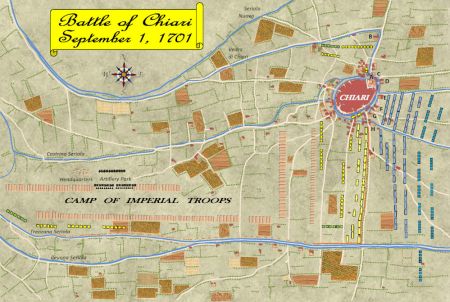 Tentative reconstruction of the map of the battle of Chiari.

The Imperialist left wing had been redeployed facing east, perpendicular to the Bajona Canal and bending westwards where it reached the Trenzano, thus forming a potence facing south. The left flank of this entrenchment was anchored on Chiari, which had a medieval wall but no modern fortifications, and extended up to the Seriola Vecchia, where another potence faced northwards. The right wing had remained in its positions behind the Trenzano Canal, facing south.

On his left wing, Eugène had extended the canal running in front of his positions up to the Trenzano Canal and had erected a two meters high earthen breastwork behind the canal thus forming a long entrenchment protected by a ditch. A few farmhouses, mills and a church laying east of the left wing had also been fortified and occupied by infantry. There were 30 guns placed along the entrenchments of this wing.

Similarly, farmhouses and mills laying to the north and south of Chiari, as well as the church of San Fermo located to the south-east, had also been fortified.

The town of Chiari was defended by 2 bns of Guttenstein Infantry and a few guns.

The neighbourhood of Chiari had the characteristics of the Italian plains covered with orchards of mulberry trees intermingled with vineyards and crisscrossed by a network of canals and moats.

The Imperialist infantry was deployed in two lines south of Chiari with a few cavalry regiments deployed in a third line behing Chiari. The rest of the cavalry was deployed midway between Chiari and the Oglio, behind the Trenzano Canal, facing south to cover the right flank.

On 1 September at 1:00 a.m., the French army set itself in movement, crossing canals and moats separating it from the Imperialist entrenchments at Chiari and easily driving back Eugène's outpost.

As soon as Villeroy's first line had passed the Trenzano Canal, it deployed and advanced to allow the second line to pass the canal and deploy in its turn. In the first line, La Marine infantry brigade was posted at the extremity of the right wing, and Normandie infantry brigade at the end of the left wing.

Estrades Dragons remained in line in their camp.

The Savoyard Vérac Dragoons and Ceva Dragoons were on the right wing and passed the bridges after the La Marine brigade.

Lautrec Dragons and Languedoc Dragons were on the left wing and passed the bridges after the Normandie brigade.

As soon as Villeroy's first line had passed the canal, 5 artillery brigades passed the bridges.

Around 10:00 a.m., Marshal Villeroy and his generals with a large escort reconnoitred the Imperialist positions. A cannonball killed a cavalryman of their escort and the reconnoitring party retired.

Villeroy had received intelligence that Prince Eugène had retired towards Brescia with the largest part of his army and that Chiari was defended by few troops. However, the Duke of Savoy and Catinat rightly doubted about this information, pointing out the size of the Imperialist camp and the importance of the entrenchments. But Villeroy reminded them of the instructions given by Louis XIV and ordered to attack.

The Franco-Spanish army advanced northwards in front of the Imperialist positions so that its left wing got close to Chiari. Villeroy had by then conducted a full flank march in front of the Imperialist positions. Now both armies had changed front with Prince Eugène's army to the south-west and the Franco-Spanish to the north-east.

Prince Eugène was well acquainted with the fury with which the French usually made their first attack. He also knew that, if initially driven back, their next attacks were rarely conducted with the same impetuosity. He had therefore ordered his soldiers to lay prone behind their breastworks until the enemy would be only a few steps from the entrenchments and then to stand and open fire.

Patrols posted on the left flank of the Franco-Spanish left wing were the first to exchange fire with the Imperialists. De Pesé, one of Tessé's adjutant, rode to report the situation of the Duke of Savoy, Villeroy and Catinat who went on site, escorted by Tessé's patrols, to examine the situation. They realised that the Imperialists had an outpost on their left, in a large church on the outskirts of Chiari but were unable to determine whether they were facing the entire Imperialist army or a rearguard left in the entrenchments. Nevertheless, Villeroy maintained his decision to attack. He expected to be able to storm Chiari with minimal losses.

In fact, Eugène's entire army was deployed quiet and motionless, covered and for the most part hidden behind the breastworks. Chiari itself, a walled town with a castle (recently fortified by the Imperialists) in its northern quarter was the main stronghold of Eugène's positions.

Around 2:00 p.m., the Franco-Spanish army was deployed between the Trenzano Canal and the Seriola Nuova, its right wing anchored on Coccaglio. Villeroy decided to advance his left wing against the Imperialist positions around Chiari.

Around 2:30 p.m., French detachments closely followed by Villeroy at the head of the infantry brigade of La Chassaigne (Normandie) itself supported by Galmoy (Auvergne) advanced against the fortified outposts to the east of Chiari.

Meanwhile, to the left of Villeroy's attack, the Duke of Savoy at the head of 2 other brigades of the left wing launched an attack on the entrenchment immediately to the south of Chiari and against the fortified church of Madonna di Caravaglio. The duke led the Carcado infantry brigade (Anjou) which was supported by the Saint-Pater infantry brigade (Vaisseaux).

At this moment, a severe thunderstorm broke out and lasted during the ongoing battle.

Around 3:00 p.m., the 4 infantry brigades of the French left wing came to contact with Eugène's well entrenched positions.

The first combats took place around the fortified farmhouses and mills forming the Imperialist outposts. Normandie brigade managed to storm a few entrenchments but the first attack was finally driven back. The brigades of the second line (Vaisseaux and Auvergne), supported by a few guns, renewed the attack and the defenders were finally driven back, retiring on the main Imperialist positions. However, the French had paid a heavy toll for the conquest of these outposts, Brigadier La Chassaigne falling during these initial attacks.

Colonel Count Daun, seconded by Major de Wendt (of Kriechbaum Infantry) then led a counter-attack from Chiari at the head of 3 bns of Guttenstein and of the grenadier coys of Nigrelli, Herberstein and Jung-Daun. He advanced along the Seriola Castrina and fell on the right flank of Galmoy's Brigade. Meanwhile, Lieutenant-Colonel Gonzales launched another counter-attack with 1 bn of Mansfeld and its grenadier coy, advancing from the south-east quarter of Chiari by Ormoculmo and falling on the left flank of Chassaigne's Brigade.

Combat was fierce and the French were suffering heavy losses. With the four initial brigades all engaged, Villeroy called for the brigades of Orgemont (Vendôme), Pellot (Saulx) and of the Savoyard Guardie to launch another attack. However, the combat was decided before they could approach.

In a desperate attempt, Tessé took the lead of the Praslin Cavalry Brigade (9 sqns) and launched a futile cavalry charge against the fortified Imperialist outposts. This charge was repulsed and his cavalry suffered heavy losses and the Imperialists gradually regained terrain.

Further south, battle still raged between the French Carcado and Saint-Pater brigades and the 6 Imperialist bns posted next to Chiari. However, the rolling salvoes of the Imperialist infantry combined with grapeshot fire from their supporting artillery stopped the advance of the French.

Taking opportunity of the fierce resistance of the Imperialist troops defending the entrenchments to the south of Chiari, Daun, de Wendt and Gonzales reconquered house after house at the point of the bayonet, capturing 4 colours of La Chassaigne's Brigade and 1 colour of Galmoy's Brigade (the latter was later retaken by the French).

By 3:30 p.m., the Imperialists had reoccupied all the positions they had before the engagement.

After one hour of unsuccessful attacks, Villeroy and the Duke of Savoy finally decided to retire. On both sides, most forces had not been engaged.

Villeroy returned to his camp between Castrezzato and Bargnana, in front of Chiari. La Marine Brigade forming his rearguard and covering his retreat.

The Imperialists lost only 36 men dead and 81 wounded.

Along the Trenzano, facing south

Between Chiari and the Trenzano stream facing east, including the 88 paces long potence running westwards along the Trenzano

In the south-east quarter of Chiari behind the moat

At the north-east corner of Chiari in a fortified house

N.B.: the squadrons present since the beginning of the campaign counted only between 84 and 90 men each; similarly 40 bns counted only between 360 and 400 men each to the exception of the Irish bns who were almost at full strength, the 25 bns and 20 sqns recently arrived were considerably larger

Ordered to remain in camp

Ordered to remain behind the headquarters