Towards the end of March 1703, the Allies, fearing for the Army of the Margrave of Baden posted on the Rhine, sent troops (13 infantry rgts and a few cavalry rgts) to Koblenz under Lieutenant-General Baron Goor. They also started to assemble their main army in the Dutch Republic.

Very reluctantly Marlborough was compelled to undertake the siege of Bonn, a fortified city of the Electorate of Cologne on the Lower Rhine, to open the campaign in the Low Countries. The City of Bonn had been handed over to the French by the elector.

For the planned siege, Marlborough himself would command the besiegers, while Field Marshal Nassau-Ouwerkerk would handle the covering army. The Dutch General Menno van Coehoorn would supervise the siege, he expected to capture Bonn rapidly and was given 90 24-pdr guns , 50 other heavy siege guns and 50 large mortars to do so.

At the beginning of April, Marlborough went to Cologne to assemble the Army of the Rhine (78 bns, 59 sqns, 140 heavy guns and 50 heavy mortars) destined for the siege of Bonn, after visiting all places on the Meuse up to Liège. 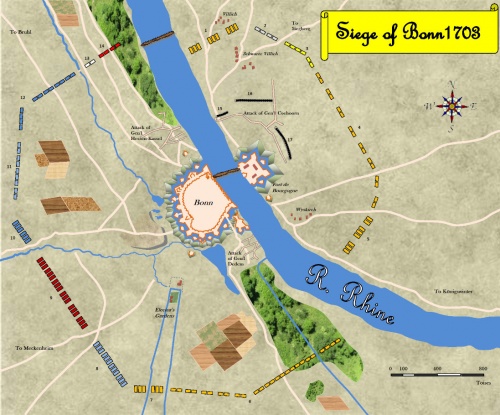 Map of the siege of Bonn.

The defensive works of the city consisted of simple bastions. The place was linked to the opposite bank of the Rhine by a bridge of boats which was protected by bridgehead, called Fort Bourgogne,.

The garrison of Bonn consisted of 10 bns (6 French, 2 Spanish, 2 from the Electorate of Cologne) under the command of the Marquis Yves d'Alègre, who was resolved to resist as long as possible to give Villeroy the opportunity to make a diversion elsewhere.

On 24 April, Lieutenant-General Cuno Josua von Bülow reconnoitred in the direction of Bonn with cavalry from Celle and Hanover and the Schulenburg Dragoons, and some Prussian cavalry.

On 25 April in the morning, Baron Fagel arrived before Bonn with the first infantry divisions. Together with the Prussian and Hanoverian cavalry, these divisions of the Army of the Rhine invested Bonn. Some 200 men were immediately thrown in the village of Poppelsdorf. Meanwhile, the Army of the Meuse, under Nassau- Ouwerkerk continued to concentrate around Maastricht.

On 26 April, Marlborough and Coehoorn arrived before Bonn with the rest of the Allied infantry of the Army of the Rhine. He extended his camp from Graurheindorf to the mountain of Kreuzberg where he established his headquarters. Marlborough ordered to conduct three attacks:

Coehoorn took dispositions for the opening of the trenches.

The Marquis d'Alègre sent a letter to the Duke of Marlborough, reminding him that an agreement had been reached the year before between the Electors of Cologne and Palatinate, by which bombing of the cities of Bonn and Düsseldorf was forbidden, to protect public buildings, churches and palaces from damage. He then warned Marlborough that, in the event of an attack on Bonn, the city of Neuburg would suffer reprisals. The duke replied, that he could only abandon his designs if the defenders evacuated Bonn.

On 27 April, the artillery (140 guns, 150 mortars) was disembarked. Meanwhile the cavalry and infantry of Hesse-Kassel reached Bonn.

By 2 May, Marlborough had already assembled 40 bns and 60 sqns in front of Bonn.

In the night of 3 to 4 May, the Allies opened the trenches in three locations in front of Bonn. However, the troops of the Prince of Hesse-Kassel and General Dedem were repelled by the fire of the defenders.

On 9 May in the evening, Coehoorn launched an attack on a breach in the wall of Fort Bourgogne with 400 grenadier, supported by four bns. Rabutin, the French commander of the fort almost immediately ordered the garrison to evacuate the fort. They were then transported by boats across the Rhine to Bonn. The Allies were now master of the bridgehead on the right bank of the river.

On May 10, the Allies redeployed 80 cannons, 40 mortars and 500 small mortars in front of Bonn and began to breach the walls. The southern approach significantly progressed.

On 11 and 12 May, the Allied artillery seriously damaged large portions of the walls of Bonn.

On 13 May, after three days of bombardment, a large breach had been created in the ramparts. D’Alègre ordered a sortie of 1,200 foot of Royal Infanterie and La Couronne Infanterie supported by 400 horse. They attacked General Dedem's troops, destroyed some guns and killed between 200 and 250 men before retreating behind the ramparts.

The same day (13 May), the Prince of Hesse-Kassel attacked the northern front of the fortress with 10 bns, supported by artillery. Despite a stubborn resistance, they managed to occupy the first and second counterscarp.

On 14 May, the bombardment continued and the besiegers created a large breach in the fortifications.

On 16 May, the conditions of capitulation were fixed, allowing the defenders free withdrawal with the honours of war. The garrison (3,600 men) was escorted to Luxembourg. It later would join Tallard's Army on the Upper Rhine.

On 17 May, Marlborough marched with the Army of the Rhine from Bonn towards the Low Countries.

After the capture of Bonn, Marlborough turned his attention to the Spanish Netherlands where he planned to launch offensives against Ostend and Antwerp, hoping to capture these two cities or at least force the French to offer battle.

On the right side of the Rhine (listed clockwise):

On the left side of the Rhine (listed clockwise):

Jörg Meier for additional details on the Allied OoB