For the campaign of 1703 on the Rhine, great projects were entertained by the French, nothing less than the capture of Vienna by a combined Franco-Bavarian-Hungarian army being intended. The first measure towards the fulfillment of this objective was the junction of Villars' Army with the Army of the Elector of Bavaria. Beforehand, it was necessary to secure a place on the right bank of the Rhine and thus get access to the easiest roads through the mountains leading to Bavaria. Villars had the choice between Freiburg, Alt-Breisach and Kehl. He chose Kehl.

On 14 February, Villars passed the Rhine at Neuenbourg and encamped at Mulheim (unidentified location) where Rosel's Corps effected a junction. Villars was now at the head of 30 bns and 43 sqns.

On 15 February, Villars' Army, to the surprise of the Imperialists, passed between the strongly garrisoned places of Alt-Breisach and Freiburg. On his way, Villars made himself master of forts and redoubts along the Rhine.

On 16 February, Villars' Army reached the Elz where the Imperial General Bibra had assembled 12 bns, 1 cavalry rgt and a few hussars at Kappel and Kenzingen and had broken the bridges on the Elz.

On 17 February, seeing Villars' Army ready to ford the Elz at several places, Bibra retired, closely pursued by Villars' cavalry and dragoons who took many prisoners and captured 4 guns.

On 18 February, Villars' Army marched to Altenheim where bridges were thrown on the Rhine to allow troops arriving from Lorraine and the Trois-Évêchés to join the main army.

On 19 February in the morning, Villars's Army reached the Kinzig whose right bank was defended by entrenchments and redoubts. The ford at Willstätt was strongly entrenched and 3 bns occupied the castle. Villars passed the Kinzig at Willstätt and the defenders retired precipitously. Margrave Louis of Baden had barely enough time to leave Kehl before its investment. The Castle of Willstätt remained occupied by Imperialist troops but was invested by 12 sqns under the command of M. de Marivault.

In the night of 19 to 20 February, the 3 bns garrisoning the Castle of Willstätt managed to escape. The French immediately occupied the castle where they found a large depot of artillery and ammunition.

Overall, during his march, Villars had captured more than 50 forts and redoubts. Alarm was so great in the region that the Imperialists evacuated Offenburg, Gegenbach and the Castle of Ortenberg. 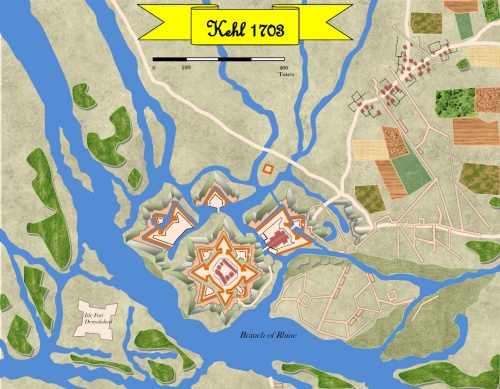 Map of the siege of Kehl.

The Fortress of Kehl had been erected in 1683 by the French engineer Tarade. It was a square fortress à la Vauban with bastions and ravelins and two hornworks to the north and south; between these two hornworks, there was a lunette and, on an island at the mouth of the Kinzig, a redoubt; finally to the south beyond the flood plain, there was another lunette: the “Lunette la Pile.” The fortress was located in a recess formed by the Rhine, the Kinzig and the Schutter.

The garrison of Kehl consisted of 2,177 Swabians under the command of Colonel Baron Enzenberg. It had insufficient ammunition and artillery pieces to offer a long defence.

On 20 February, Villars invested Kehl. His army then consisted of 49 bns and 77 sqns. All his infantry and 2 cavalry brigades encamped in front of Kehl on the left bank of the Kinzig while the rest of his cavalry and his dragoons under the command of M. de Lannion passed to the right bank. Lannion's Corps extended up to Offenburg to ease its subsistence. Furthermore, 6,000 workers were requisitioned to erect a line of circumvalation. The floating bridge previously thrown at Altenheim was moved upstream from Kehl while a second bridge was established downstream, thus securing easy communications with Strasbourg. Overall, 42 guns, 21 mortars and 10 howitzers were sent from Strasbourg.

On 22 February, while awaiting the arrival of the siege artillery from Strasbourg, Villars marched on Offenburg at the head of a 6,000 men strong detachment to reconnoitre the Kinzig Valley. In Offenburg, he captured 28 guns along with large quantities of powder, ammunition and flour, and many artillery carts.

On 23 February, Villars pushed up to Haslach where marauders had preceded him and he returned to Biberach. Villars was informed that the Margrave of Baden was assembling all his troops at Bühl, recalling those detached to Bavaria. Villars sent a letter to the Elector of Bavaria to inform him that a junction would now be possible by the Kinzig Valley if the Elector would advance to Villingen.

On 24 February, Villars returned to Kehl where everything was ready for the siege: the bridges on the Rhine had been established, the siege artillery was arrived and the circumvalation line almost completed. Villars also instructed Lannion to retire on Willstätt. Villars also sent back 3 bns to Huningue, Neuenburg and Fort-Louis.

In the night of 25 to 26 February, Villars opened the trenches in front of Kehl. The attack was concentrated against the Upper Rhine Hornwork, coming within 80 meters of the palisade.

In the night of 26 to 27 February, the trench was pushed beyond the dyke up to an arm of the Rhine separating the dyke from an island where the Imperialists had a redoubt. After a few cannon-shots, they evacuated this redoubt which was quickly occupied by the French. Villars' engineers proposed to attack another redoubt on the right but Villars refused, preferring to dig a trench to severe this redoubt from the fortress.

On 27 February, the Imperialists evacuated the redoubt which would soon be isolated from the Fortress of Kehl. The French established a battery (12 pieces) in the island to fire on a demi-lune flanking the hornwork. Fearing an attack of the Margrave of Baden, Villars had his workers connecting the Kinzig to a ditch in front of his positions.

On 28 February, the French batteries opened on Kehl.

On 1 March, the French reached the first covert way on the right.

In the night of 1 to 2 March, the French trenches reached the ditch of the hornwork and 10 pieces opened on it.

On 3 March, the French cannonaded the sole redoubt still in the hands of the Imperialists in the island and then sent forward grenadiers who easily made themselves master of the redoubt, the Imperialists having evacuated it.

In the night of 3 to 4 March, the French trenches reached the glacis.

In the night of 4 to 5 March, the French attacked and captured the second covert way and their artillery breached the hornwork.

In the morning of 6 March, 12 coys of French grenadiers under the Comte du Bourg stormed the hornwork. The Imperialists took refuge in the fort. In this action, the French lost 60 grenadiers killed or wounded and 2 officers wounded.

In the night of 6 to 7 March, the French established batteries in the hornwork and on the first covert way to play against a bastion of the fort.

On 7 March, Villars summoned the commander of Kehl who refused to surrender.

In the night of 8 to 9 March, the French attacked the angle of the covert way.

On 10 March, the garrison of Kehl capitulated with the honours of war.

On 12 March, the garrison of Kehl (3,000 men) marched under escort to Philippsburg. The French found 28 guns, and a large quantity of powder and of flour in the fortress.

During the siege, the Imperialists had lost 300 men killed, and the French, about 100.

With Kehl in their hands, the French possessed a base of operation on the right bank of the Rhine. Furthermore, they had now two roads to penetrate into Germany: the Kinzig Valley and the Waldkirch Valley.