The campaign lasted from May to July 1704

In May 1703, by signing the Treaty of Methuen, Portugal broke its prior agreement with France and joined the Grand Alliance. It was then decided to make a serious effort in Spain.

For the campaign of 1704, Philip V planned to launch an offensive in Portugal during spring. He started to reorganise his army à la française, transforming the old infantry tercios in regiments. Each of these regiments initially consisted of a single battalion of 12 companies (each of 40 men with the exception of the colonel company and the grenadier company, which counted 50 men). Later, the regiments were increased to two battalions. Similarly, the cavalry and the dragoons were also reorganised in regiments. Each of these regiments consisted of 3 squadrons, each of 4 companies (1 captain and 35 troopers). Furthermore, new recruits were raised for the old regiments and the provincial militia were transformed in an auxiliary force, which would be used as a reserve by the regular army. 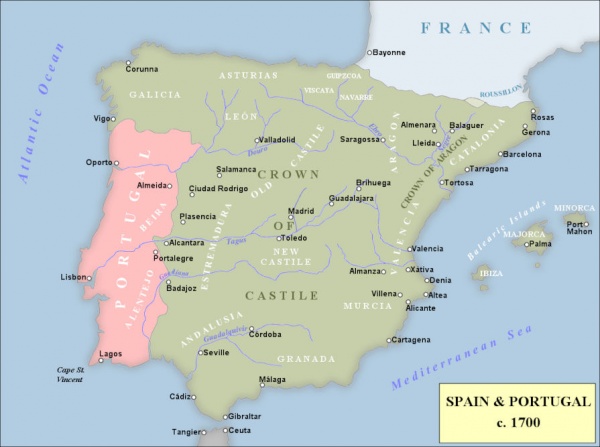 In January 1704, the Habsburg claimant to the throne of Spain, Archduke Charles of Austria, the self-proclaimed King Charles III of Spain, arrived in Great Britain.

Portugal had offered to help him with 28,000 men, to which the Dutch had added 2,000 men under General Nicolas Fagel, the Empire 300 men, and the British 6,500 men, under Mainhard, Duke of Schomberg, a son of the old marshal. The British contingent consisted of:

In February, a French army (20 bns and 19 sqns, for a total of approx. 13,000 men) crossed the Pyrenees under the command of the Maréchal Marquis de Puységur and of the [Berwick, James FitzJames, Duke of|Duc de Berwick]], natural son of the former King James II of England, who had been appointed captain-general of the Franco-Spanish army.

On 17 January, Archduke Charles was sent away with a British fleet under Sir George Rooke and a British army to possess himself of the Kingdom of Spain. However, the fleet was driven back by continuous foul weather.

On 23 February, the combined fleet carrying Dutch and British troops, and conveying Archduke Charles, sailed again from Spithead with a very large convoy.

On 4 March, King Philip V set off from Madrid at the head of the Franco-Spanish main army (18,000 foot and 8,000 horse). The Duc de Berwick was the effective commander of this army. At Plasencia, the king officially declared war to Archduke Charles and his allies.

On 8 March, the fleet reached Lisbon. The British and Dutch troops were landed. Portugal undertook to provide 28,000 troops (15,000 regulars and 13,000 militia) to co-operate with this force.

On 13 March, Vice-Admiral Leake, with a further force of ships, and with transports and troops in company, joined the Commander-in-Chief.

Archduke Charles disembarked at Lisbon surrounded by the Spanish grandees who had espoused his cause. The intention was to invade Spain rapidly in union with the Portuguese Army in the hope that discontented Spaniards would join them. But it was speedily found that the Portuguese army was ill-equipped and inefficient, the magazines empty, the fortresses in ruins, the transport not in existence. To add to these shortcomings, Schomberg and Fagel quarrelled so bitterly that they went off, each with his own troops, in two different directions:

On 20 March, Sir George Rooke, leaving Leake in the Tagus River, departed on a cruise to annoy the enemy, and to satisfy himself of the safety of the homeward-bound merchant fleet from the Levant.

On April 20, Rooke returned to Lisbon, and found awaiting him orders to proceed up the Straits and to render assistance to the cause of the Allies in Catalonia and the Riviera.

The Spaniards reacted by assembling an army of 26,000 men. Part of this army was deployed south of the Tagus River under the captain-general of Andalusia, the Marquis de Villadarias; while the other part (including Moscoso Cavalry and Ordenes Cavalry under Don Francisco de Ronquillo took position to the north of the Tagus.

The Duc de Berwick formed a vigorous plan for the invasion of Portugal: one Spanish force under Don Francisco Ronquillo was to threaten Beira Alta at Almeida. He himself would enter Beira Baixa by the north bank of the Tagus. The Prince of Tzerclaes was to have advanced from the south to meet Berwick at Vila Velha de Ródão. The two columns of Berwick’s Army would make a junction at Portalegre, on their way to Abrantes. Meanwhile, Villadarias’s Army would penetrate into Portugal by way of Ayamonte, and Ronquillo’s Army would advance from Salamanca to Almeida to fix the army of the Marquis de Las Minas.

Operations began in May, in some confusion. Both opponents had divided their army in several corps and it was difficult to exert proper coordination between them. Spring had been very warm and dry and the French horses suffered heavily from heat and lack of oat and fodder.

On 4 May, the main Franco-Spanish army (25 bns, 40 sqns) advanced in two columns from Alcántara:

On 5 May, Berwick’s column laid siege to Salvaterra (Salvaterra do Extremo).

On 7 May, the garrison of Salvaterra (1 bn) surrendered, without firing a single shot, to the main Franco-Spanish army. Segura and Rosmaninhal were also captured.

After the capture of Salvaterra, the main Franco-Spanish army resumed its advance in two columns, while three auxiliary corps supported the operations:

On 7 or 8 May at dawn, a detachment (8 bns and a few sqns) under Lieutenant-General Marquis de Thouy encircled Fagel’s 2 Dutch bns in Sobreira Formosa. Fagel managed to escape but Major-General Welderen and the 2 bns surrendered.

During this time, Tzerclaes’ column (4 French bns, 8 Spanish bns and 30 sqns), which had taken position at Arronches, was facing a strong force under the Duke of Schomberg, who was posted at Estremoz. Tzerclaes did not dare to advance, fearing that his line of communication with Spain would be cut off if he did so. Even after repeated orders from Philip V, Tzerclaes remained idle at Arronches.

The Duke of Berwick took disposition to march to Tzerclaes’ support. He left a detachment (5 bns, 15 sqns) under de Gaëtano to garrison Castelo Branco and then marched with his army to Vila Velha de Rodao, where he crossed the Tagus on a bridge of boats. He then resumed his advance to Nisa, leaving 2 bns and 1 sqn to guard the bridge.

On 8 May, the garrison of Portalegre surrendered as prisoners of war.

The Marquis de las Minas’ Army (18 bns, 18 sqns) was at Almeida. He first captured the Castle of Guinaldo (unidentified location). He then crossed the Estrella Mountains and marched towards Penamacor and recaptured Monsanto. De Gaëtano, who was still posted at Castelo Branco, decided to retire to Zarza where he was joined by a small detachment under Ronquillo.

Shortly afterwards, de Joffreville, who had been sent by Berwick, arrived at Zarza. He persuaded Ronquillo to send 15 sqns to reconnoitre Minas’ Allied army and to occupy a gorge with 8 bns. However, this reconnaissance party soon bumped into the advancing Allies. It managed to retreat through the gorge, but its precipitous retreat spread panic among the accompanying infantry, which was already retiring towards Zarza. Furthermore, the main body of infantry, which was posted at Zarza, thinking that these were Portuguese troops, fled in the direction of Alcántara.

On the next day, the Franco-Spanish infantry reoccupied its outpost at Zarza.

Meanwhile, a detachment (3 bns, 6 sqns) under Richebourg, sent by Berwick to reinforce Ronquillo’s Corps, had crossed the Tagus at Vila Velha de Ródão and marched by way of Castelo Branco. Ignoring the recent developments, Richebourg came to contact with the Portuguese army near the gorge. De las Minas, unsure of the exact strength of Richebourg’s detachment did not dare to attack. Richebourg retired to Castelo Branco, where he rejoined Berwick, who had advanced with 8 bns and 14 sqns to relieve Monsanto while Philip V remained at Nisa with the rest of the main army.

Berwick decided to offer battle, and instructed Ronquillo to make a junction with his own forces which were encamped on the left bank of the Ponsul River.

Ignoring that Berwick had recrossed the Tagus, Minas’ army marched towards Castelo Branco and the pontoon bridge of the Franco-Spanish at Vila Velha de Ródão.

When Las Minas was informed that Berwick’s Army was deployed near Castelo Branco, he retired to a strong position the vicinity of Penamacor. Since it was risky to attack Las Minas in these positions, Berwick, leaving command to Lieutenant-General Count d’Aguilar, personally rejoined the king at Nisa.

On 13 June, the Franco-Spanish army captured the place of Idanha-a-Nova.

On 22 June, Villadarias appeared before Castelo de Vide. The garrison of the place consisted of 2 Portuguese bns and 1 British bn (William Stewart's Foot). However, the place was not very well fortified with the exception of its castle.

On 26 June, after four days of siege, the defensive works of Castelo de Vide were in poor condition and the governor of the place opened negotiations. Villadarias required the garrison to surrender as prisoners of war, but the William Stewart's Foot refused to do so. The governor finally capitulated and the Franco-Spanish entered into the place. At first, the British retired in the castle, determined to resist, but they surrendered when they realised that the governor had spoiled all the gunpowder.

Villadarias then turned his attention to the Castle of Marvão.

On 27 June, the Franco-Spanish army fought an engagement near Sarcedas on the Alvito River where a combined force of Dutch and Portuguese troops under the Count de Donha was routed.

At that point, the campaign was interrupted due to the intense heat, illness and the lack of supply. Before retiring from Portugal, the Franco-Spanish army razed the fortifications of Castelo de Vide, Portalegre and Castelo Branco and placed garrisons in Marvão, Salvaterra and Segura.

On 1 July, the Franco-Spanish army retreated to encamp in Spain along the border for the summer:

Philip V returned to Madrid and Berwick joined the force operating in the northern province of Beira.

British and Dutch soldiers also suffered severely from the heat and operations came to a standstill.

During the campaign, Ronquillo and Tzerclaes had failed to support Berwick, and the newly levied Spanish troops had proven unsteady. Overall, the invasion of Portugal had failed.

Problems soon arose between the Duc de Berwick and the Prince of Tzerclaes, and the former was recalled to France and replaced by Maréchal Tessé.

Meanwhile, Sir George Rooke had sailed from Lisbon accompanied by Prince George of Hesse-Darmstadt, to Barcelona. The prince, who had been governor of Catalonia, believed that he could bring about a rising in the province in favour of the Habsburg cause.