At the beginning of May 1704, while a Franco-Spanish army under the Duke of Berwick attempted an invasion of Portugal, Sir George Rooke had sailed from Lisbon for Barcelona with an Anglo-Dutch fleet, hoping to bring about a rising in the province in favour of the Habsburg cause. However, the place remained faithful to Philip V, the new Bourbon king.

At the beginning of June, the Allied fleet set sail for Nice, which was threatened by a French invasion. However, the junction of the French fleets of Brest and of the Mediterranean at Toulon induced Rooke to steer back towards the Strait of Gibraltar.

By 28 July, Rooke's fleet had not advanced eastward of Tétouan. In consequence of suggestions which had been sent to him through the British minister at Lisbon from Archduke Charles of Austria and the King of Portugal, Rooke held another council of war, which, after discussing various projects, determined to make a sudden attempt on Gibraltar, which at the time was held by the forces of Philip V. 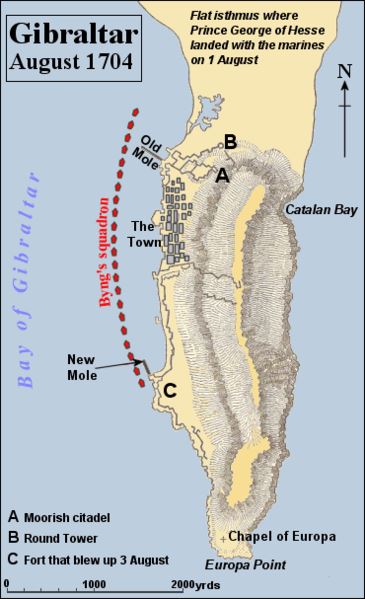 The plan of action involved the landing to the northward of the town of the British and Dutch Marines, under the Prince of Hessen-Darmstadt, who would sever communications between the place and the mainland; and the reduction of the fortress by means of the fire of a squadron of ships, placed under the command of Rear-Admirals George Byng and Paulus van der Dussen. This squadron consisted of:

On the night of 31 July, Rooke signalled to the squadron to proceed. Even though Gibraltar was defended by more than 100 cannon, its garrison counted less than 72 officers and men (including 6 artillerymen), a force obviously insufficient to hold so extensive a position, or even to work one-third of the guns.

On the morning of 1 August, the squadron entered the Bay of Gibraltar and anchored there. In the meantime, an easterly wind having sprung up, the main body of the fleet had also crossed the Strait. In the afternoon it took up a position in the bight of the Bay, off the rivers Palmones and Guadaranque, and awaited events.

Diego de Salinas, the governor of Gibraltar, after arming the inhabitants, could count on a total of 470 men to defend the place:

As Byng dropped anchor, the town fired; but most of the shot flew over him, though the Ranelagh's mainmast was wounded. The ships made no reply, it having been determined not to attack until the Prince of Hessen-Darmstadt, with the Marines, should have landed and summoned the place. But the squadron was ordered to warp a little farther out.

The Marines, to the number of about 1,800, were then quickly landed on the neck, at the mouth of the Guadarrán River. The only opposition coming from a company of 30 mounted militia, who speedily retired with the loss of one trooper. Having posted his men and isolated the peninsula from the mainland, the Prince of Hessen-Darmstadt summoned the governor to declare for Charles III (Archduke Charles). The Spaniard, after some delay, replied that, having taken the oath to Philip V, he and the garrison would defend the place for that monarch with their lives.

In the night of 1 to 2 August, the Prince of Hessen-Darmstadt advanced with 1,800 marines up to a few meters from the walls.

On the morning of 2 August, before this answer had been returned, Byng began to station his vessels for the intended bombardment; but, as it was nearly calm, they had to be warped into their assigned positions. This operation occupied all day, the town occasionally firing, but not being able to interfere with the carrying out of the plan.

During the night of 2 to 3 August, while the process of warping in still continued, Rooke, to make some diversion, ordered Captain Edward Whitaker, of the Dorsetshire (80), to man and arm boats, and to destroy a French vessel that lay within the Old Mole. Meanwhile, Byng, threw a few shells into the town from his bombs.

By daybreak on 3 August, such vessels as had not succeeded in reaching their assigned stations were directed to place themselves to the best possible advantage; and the Ranelagh (80) herself pushed close in until there was little if any water under her bottom.

At 5:00 a.m., the fortress began the action, and the Allies forthwith replied vigorously, concentrating their fire against the two moles. Women and children were evacuated through the “Carlos V Gate” and took refuge in the Sanctuary of Nuestra Señora de Europa, located on Europa Point.

The smoke soon grew dense, and, as there was little air to carry it off, Byng ordered his ships not to fire unnecessarily and to use only their lower deck guns as being the heaviest.

Towards noon, Byng sent word along the line by Captain Edward Whitaker, who had gone on board the Ranelagh (80), that firing was to cease altogether, in order that he might observe what effect had been produced. Whitaker passed southward from ship to ship, until he reached the Lenox (70), which was the nearest ship to the New Mole. From her deck, Whitaker and Captain Jumper noticed that several of the Spanish guns in that neighbourhood were dismounted or silenced; and, returning to the Ranelagh (80), Whitaker reported this, and suggested that if the boats were manned and armed they might seize that part of the works.

The defenders had concentrated their forces along the western coast and had left the opposite coast unguarded. A party of 100 pro-Habsburg Catalans seized this opportunity to land and climb the cliff on the eastern coast at a place now known as “Playa de los Catalanes.”

Byng accordingly made a signal for the boats to be got ready, and also dispatched Edward Whitaker to Sir George Rooke with a request for the co-operation of the rest of the boats of the fleet. In the meantime he ordered such boats as he had to proceed to the southward of the head of the New Mole, and to place themselves under the command of Captain Jasper Hicks, the senior officer of the southern division. Hicks was directed to make the suggested attack, should it appear to be practicable. Rooke, upon receiving Byng's message, approved of the design and sent back word that Edward Whitaker was to lead the attack.

Byng thereupon appointed Captains Fairfax, Mighels, Roffey, and Acton to assist Captain Edward Whitaker in the attempt upon the New Mole: but Captains Hicks and Jumper had already proceeded in pursuance of the Rear-Admiral's earlier orders, and, pressing ashore with their boats, effected a landing long before the other captains could come up. The defenders of the New Mole retired to Gibraltar without opposing any resistance. However, before leaving, Captain Bartolomé Castaño had mined the “Leandro Tower.” The tower exploded as seven boats of the attackers were approaching. The explosions killed 50 sailors and wounded 60 others, and caused so much discouragement that a retreat in the direction of the boats began.

Happily Captain Edward Whitaker, with more boats, arrived in time to stay the flight. The 600 attackers landed. From that moment the advance experienced no check, and the Allies soon made themselves masters of the New Mole and of the “Tres Reyes Battery,” a redoubt halfway between the New Mole and the town.

As bombardment ceased, many inhabitants began to return to their houses. However, bombardment soon resumed. Meanwhile, the women and children returning from Europa Point were taken prisoners by the British troops who had landed at the New Mole. Despite Rooke’s specific orders, many women were raped and mistreated.

The capture of the New Mole made it possible to launch an attack on Gibraltar from the south. Two columns were sent forward to surround the city, while sailors secured the neighbouring heights.

As bombardment ceased, many inhabitants began to return to their houses. However, bombardment soon resumed. Meanwhile, the women and children returning from Europa Point were taken prisoners by the British troops who had landed at the New Mole. Despite Rooke’s specific orders, many women were raped and mistreated.

When he saw that the landing parties had securely established themselves, Byng, by direction of Sir George Rooke, went ashore to Captain Edward Whitaker's position, and summoned the fortress. At the same time, the Prince of Hessen-Darmstadt, advised of what had taken place, sent in another summons from the northward.

The defenders, seeing their wives and children taken prisoners, urged Governor de Salinas to surrender. After five hours of bombardment, Salinas finally hoisted the white flag, even though the fortress was still well supplied with artillery, ammunition and provisions. The women and children taken prisoners seem to have plaid an important role in Salinas’ decision. British officers were sent to Gibraltar to negotiate the terms of capitulation.

In the evening the governor, Don Diego Salinas, replied that he would capitulate on the following morning.

On 4 August, Salinas surrendered to the Prince of Hessen, as representing Charles III, and received all the honours of war. The terms of capitulation specified that:

All French citizens were specifically excluded from this capitulation and would become prisoners of war.

The Marines marched in towards evening; and Byng then re-embarked most of his seamen, leaving about 250 ashore only pending their relief by additional Marines.

On 5 August, those of the inhabitants and soldiers, who had chosen to leave Gibraltar, left by the “Puerta de Tierra” with the honours of war. Of the 5,000 inhabitants, only 70 chose to remain.

For the capture of Gibraltar, the Allies lost 2 lieutenants and 59 men killed; and about 8 officers and approx. 252 men wounded.

The Spanish garrison had lost about 100 men during the bombardment.

Leaving the place in charge of the Prince of Hessen and of approx. 2,000 Marines (Henry Holt's Marines, Alexander Luttrell's Marines and Edward Fox's Marines), the Allied fleets stood over to the coast of Barbary, Rooke having first detached Rear-Admiral van der Dussen, with 5 sail of the line to Lisbon, and thence to Plymouth, to bring back forces destined for service in Portugal. The Prince of Hessen lost no time in repairing the fortifications.

The British had acquired an important naval base but their fleet would still be obliged to return home for winter because the necessary facilities were not available (they would be built later).