The siege lasted from August to October 1705

In June, a British squadron arrived at Lisbon under the command of Charles Mordaunt, Earl of Peterborough who had been sent with a commission to command both the fleet and the army, and to promote a rising in favour of the Habsburg pretender to the throne of Spain, Archduke Charles. The archduke personally accompanied the expedition.

On 2 August, the allied fleet sailed for the Mediterranean, transporting Archduke Charles and about 7,000 troops on board. The allied fleet called at Gibraltar where 8 bns of the garrison were picked up, bringing the total strength of the troops to 12,000 men.

On 22 August, the allied fleet arrived off Barcelona. Such of the ships as ventured within range of the batteries were at once fired at. 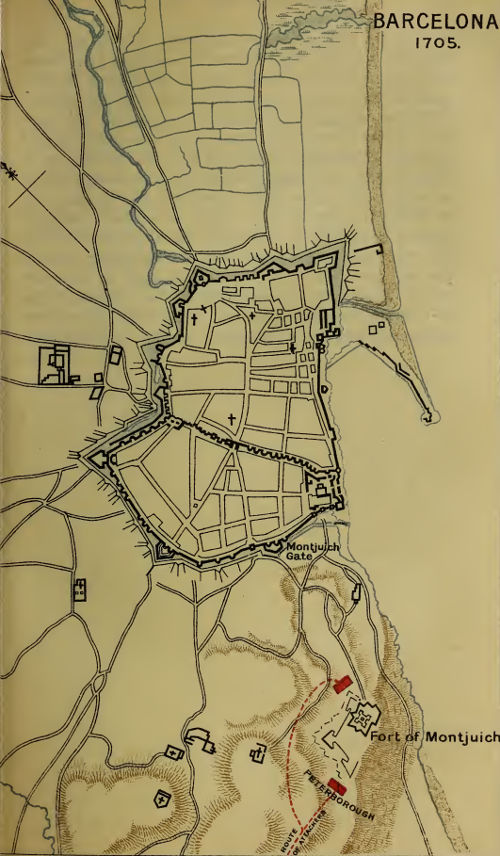 Map of the siege of Barcelona in 1705 – Source: Fortescue, A History of the British Army

The reports sent to Great Britain had represented Barcelona as ill-fortified and ill-garrisoned. Ill-fortified it may have been if compared with a creation of Vauban or Coehorn, but it was none the less a formidable fortress, well stocked with supplies and garrisoned by 7,000 foot and 1,000 horse under the energetic Governor Francisco Antonio Fernández de Velasco y Tovar.

About 1,200 m. to south-west of Barcelona stood the small fort of Montjuïc, crowning a hill 213 m. above the fortress, strong by nature and strengthened still further by outworks, which though incomplete were none the less formidable. It was garrisoned by veteran Neapolitan troops.

On 23 August, the Prince of Hessen-Darmstadt, who had been reconnoitring the coast in advance of the expedition, rejoined the fleet, troops were landed at the mouth of the Besós River and took up a position to the north-east of the town with their left flank resting on the sea. However, the expected uprising against the Bourbons did not take place.

A few days later, the rest of the Allied army landed, invested Barcelona and began the formal siege of the city. Soon pro-Habsburg Catalan troops joined the Allies.

On 27 August, the Allies held a council of war. Peterborough, who considered Barcelona as a strong fortress, wished to abandon the project of a regular siege for operations of a livelier kind, but was prevailed upon to give it a trial for eighteen days, at the close of which he could order the re-embarkation of the army.

On 2 September, the Allies held a council of war. They considered that their forces were insufficient to launch a general assault. They also doubted that Catalonia would revolt before the fall of Barcelona.

On 5 September, the Allies held a council of war.

On 8 September, the Allies held a council of war. They were informed that Berwick was marching from Provence at the head of a French relief corps (3 dragoon rgts, 6 bns).

The Capture of the Fortress of Montjuïc

On the evening 12 September, Peterborough produced an original scheme of his own, resolving to capture Montjuïc by escalade. The attack would take place at dawn on 14 September, with a picked force of 1,800 foot and 300 horse. Before launching the attack on Fort Montjuïc, Peterborough ordered to simulate the re-embarkation of the artillery and the lifting of the camp.

On 13 September, not a word was said to the men of the work before them. No further orders were issued than that 1,200 British and 200 Dutch should be ready in the afternoon to march towards Tarragona, while 1,300 men (including 1,000 Catalans under Antonio de Peguera) under Brigadier James Stanhope were secretly detailed to cover the rear of the assaulting columns from any attack from Barcelona.

At 6:00 p.m., the force moved off under Lord Charlemont towards the north-west, continuing the march in this false direction for four hours

At 10:00 p.m., Peterborough at last gave the order to turn about to southward. The night was dark, and much of the ground so rocky as to show no track, so that when the columns at length came up at Sans before Montjuïc, by way of Sarriá and Gracia, one complete body of 200 men was found to be missing, having evidently strayed away from the path of the remainder.

Half the force however was told off for simultaneous assault on the eastern and western extremities of the fort, Peterborough and Prince George of Hessen-Darmstadt accompanying the eastern column, which, since it was expected to meet with the sternest of the work, was made the stronger. The other moiety of the troops was held in reserve between the two columns.

A little after daybreak on September 14, the signal was given; the storming parties dashed up the glacis under a heavy and destructive fire, and plunging in among the enemy drove them headlong from the outworks. Following the fugitives in hot pursuit, Peterborough and Prince George captured the eastern bastion of the fort itself, threw up a barricade of loose stones in the gorge and entrenched themselves behind it. The western attack had met with equal success, and had likewise entrenched itself in a demi-bastion in that flank of the fort. The Allies had also captured several artillery pieces.

Both parties being thus under cover the fire ceased, and Peterborough sent orders to Stanhope to bring up his reserve.

Meanwhile the Governor of Barcelona, being in communication with Montjuïc, had at the sound of the firing despatched 400 dragoons in all haste to reinforce the garrison. As they entered the fort, they were received with loud shouts of welcome by the Spanish.

Prince George, mistaking the sound for a cry of surrender, at once started up and advanced with all his men into the inner works. They were no sooner in the ditch than the Neapolitan garrison and the 400 Spanish dragoons swept round them to cut them off. 200 men were taken prisoners, Prince George fell mortally wounded, and the rest fell back in confusion.

This was a severe blow; but worse was to come. Peterborough hearing that fresh reinforcements were on their way to the enemy from Barcelona, rode out of the bastion to look for himself, and no sooner was he gone than the troops were seized with panic. Lord Charlemont was powerless to check it; and in a few minutes the whole of the men, with Charlemont at their head, came running with unseemly haste out of the captured position.

They had not run far when up galloped Peterborough in a frenzy of rage. He snatched Charlemont's half-pike from his hand and waved the men back to the fort with a torrent of rebuke. Rallying instantly they regained their post without the loss of a man before the enemy had discovered their retreat. The appearance of Stanhope with the reserve presently banished all further idea of panic.

Meanwhile the Spanish reinforcements from Barcelona had met the British prisoners, and learning from them that Peterborough and Prince George were present in person before Montjuïc, assumed that the British were attacking in overwhelming force. They therefore returned to Barcelona, leaving the fort to its fate.

The Allies then began to bombard Fort Montjuïc.

On September 17, a shot hit the powder magazine of Fort Montjuïc. The explosion killed the commander and a large part of the defenders. After three days of bombardment, the weakened garrison of Montjuïc surrendered.

Continuation of the Siege of Barcelona

On 20 September, the trenches were opened in front of Barcelona.

From their positions at Montjuïc, the Allies then began to bombard Barcelona, with the support of their fleet. The Viceroy Velasco called the Coronela (city militia) but the inhabitants hesitated to continue resistance.

On 4 October, after a general bombardment in which the Navy cooperated on shore as well as afloat, Velasco met the “Council of the Hundred” to propose the capitulation and thus prevent the destruction of Barcelona.

On 9 October, the terms of surrender of Barcelona were formally arranged. They stipulated that Catalan laws and court would be respected, in clear reference to the Pact of Genoa.

A popular uprising took place in Barcelona when the rumor spread that Viceroy Velasco intended to arrest some inhabitants, who had been accused of conspiracy. Soon there were street fighting and looting.

On 14 October, the Allies entered Barcelona. They occupied the walls and patrolled through the streets. The inhabitants were ordered to stay at home. The “Council of the Hundred” managed to save the lives of Viceroy Velasco and other prominent pro-Bourbon notables, who were threatened by the mob.