The French were besieging Turin since May 1706 but progressed very slowly.

At the beginning of July, Prince Eugène managed to cross the Adige in front of Vendôme’s Army with a relief force. He then successively crossed the Canalbianco and to Po. By the beginning of August, this relief force was gradually advancing upstream along the right bank of the Po towards Piedmont.

A Franco-Spanish army under the Duc d’Orléans timidly followed the Imperialists during their march towards Piedmont without opposing any serious resistance.

By the end of August, the artillery of the defenders of Turin had established its superiority and the siege continued to progress very slowly.

On 1 September, Prince Eugène’s Army made a junction with the small cavalry corps of Duke Victor Amadeus of Savoy at Villastellone, on the right bank of the Po, between Carmagnola and Moncalieri.

On 4 September, the Allied army crossed the Po at Carignano and encamped at Beinasco on the Sangone.

The Duc d’Orléans repeatedly tried to convince his generals to move out of their entrenchments and to attack the inferior Allied army.

On 5 September, the Allied army marched up to the Dora Riparia, encamping with its left opposite Pianezza and its right extending to the highway leading from Turin to Rivoli.

On 6 September, the Allies crossed the Dora Riparia and established their left on the Stura River and their right at Pianezza. The Duke of Savoy and Prince Eugène, after reconnoitring the French positions, had carefully chosen the weakest part of the circumvallation where there were few entrenchments. The headquarters were established at Venaria on the Stura.

On 6 September, the French commanders sent workers to erect entrenchments between the Dora Riparia and the Stura. The Duc d’Orléans wanted to recall 30 bns, which under M. d’Albergotti were posted in the mountains, but the Maréchal de Marsin disagreed, saying that the duke did not have the authority to raise the siege of Turin. Therefore, only 17 bns were deployed in a single line between the two rivers with 65 sqns to support them. The rest of the army was disseminated along the lines between the Dora Riparia and the Po, or employed to guard the trenches and the bridges. 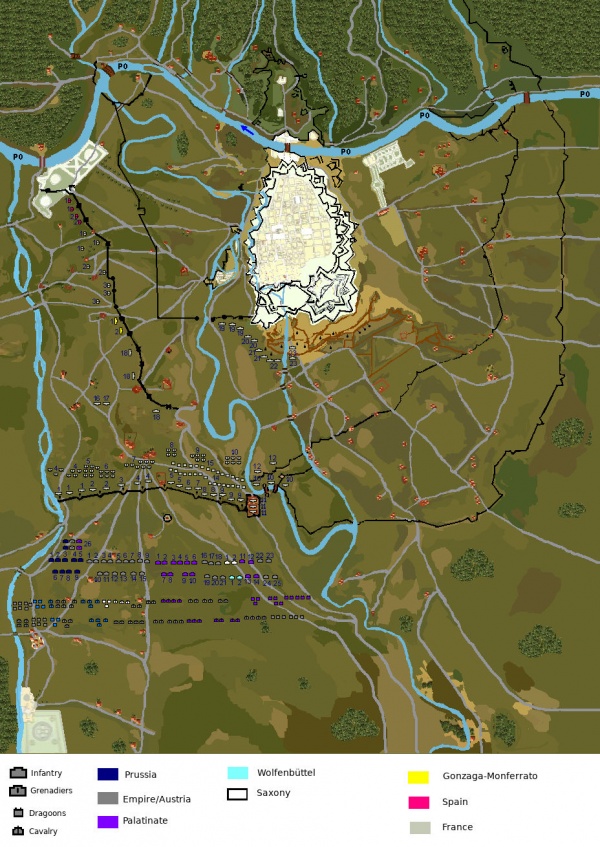 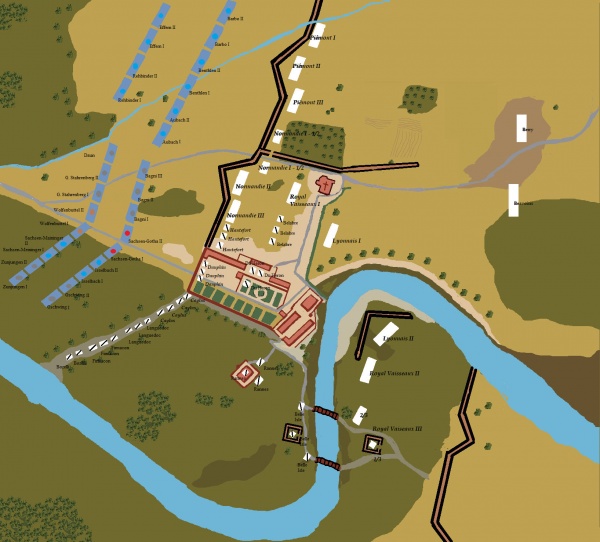 On 7 September 1706 at daybreak, the Allies advanced into the plain between the Dora Riparia and the Stura in eight columns, each split into two lines, with intervals between the columns to allow for the deployment of artillery. The Allied army deployed in order of battle in front of the uncompleted French line.

The Duc d’Orléans and the Maréchal de Marsin took position in the centre of the Franco-Spanish line; the Comte d’Estaing took command of the right wing which reached the Stura; and M. de Saint-Fremont, of the left which was anchored on the Dora Riparia in front of Lucento. The Duc de La Feuillade remained in the defensive lines between the Dora Riparia and the Upper Po to continue the siege. M. d’Albergotti, assisted by M. d’Arène, remained in charge of the positions in the mountains on the right bank of the Po and on the heights of Chieri.

At 10:00 a.m., the battle began with a lively cannonade but the guns of the Allies did not make significant damage to the French who were protected by entrenchments.

The French drove back the two first attacks. Prince Eugène had his horse killed under him but he rallied his troops and renewed the attack.

The Duc d’Orléans was lightly wounded at a hip but remained with his troops.

During Prince Eugène’s frontal assault, the Duke of Savoy noticed that the extremity of the French entrenchments near the Stura was feebly defended. He stormed this part of the entrenchments.

At that moment, Prince Eugène broke through the French centre, separating the two wings.

The Maréchal de Marsin was mortally wounded and taken prisoner,

The French left wing resisted longer because it could count on artillery support from Lucento and from the redoubts built along the Dora Riparia, but it eventually gave way.

Towards the end of the battle, the Duc d’Orléans was wounded once more, this time more severely at an arm, and retired from the battlefield. The Maréchal de Marsin being prisoner, the duke confided command to M. de Saint-Fremont. He also ordered to raise the siege of Turin.

The French retired on the three bridges on the Dora Riparia, the Stura and the Upper Po. 10 dragoon rgts, which had dismounted to support the infantry, were forced to abandon their horses. Many fugitives were captured by the Allies.

The Count von Daun did not wait for the complete withdrawal of the French army before coming out of Turin with a detachment of the garrison. He soon established contact with a reinforcement which followed him into Turin.

The Duc d’Orléans planned to retire towards the heights of Moncalieri and then to march towards Alessandria before retreating towards the Duchy of Milan to establish contact with the forces of the Prince de Vaudémont and M. de Medavi. However, M. d’Arène informed him that the Allies were already masters of Moncalieri and Chieri, which was not the case. The generals of the Duc d’Orléans convinced him to retire towards Pinerolo.

The Allies lost 1,800 men killed and 2,500 wounded; the French, 1,000 men killed and 3,000 men wounded (most of them being captured by the Allies). The French also lost all their siege artillery, all their provisions and and their baggage. The Prince of Braunschweig-Bevern was killed in action. Carl Colona von Fels, the Prince von Darmstadt and the Marquis de Langallerie particularly distinguished themselves during this battle.

This victory of the Allies and the retreat of the French towards Pinerolo instead of Alessandria sealed the fate of Italy.

For the moment, we have a detailed order of battle only for the French troops deployed in the Lucento sector (left wing). Units are listed from right to left.

...so there were probably another 6 bns and 33 sqns deployed on the right wing.

N.B.: units are listed from right to left.

Jorg Meier for the Imperialist order of battle