In August 1705, after the capture of Gibraltar by the British and their successful defence of the place, Archduke Charles embarked in Lisbon for the Mediterranean. He stopped in Altea where was proclaimed king and then proceeded to undertake the siege of Barcelona.

Constantly spurred on by Prince Georg von Hessen-Darmstadt, armed squads blocked the passage of the Bourbons on the plain of Vic. On 17 September, the Allies managed to capture the Fortress of Montjuïc, which they fortified and used to bomb the city of Barcelona. On 9 October, the city, which was surrounded by the Allied troops of the Earl of Peterborough, capitulated. On 22 October, Archduke Charles entered Barcelona. On 7 November 1705, he swore in the Catalan constitution, and was appointed as Charles III. Lord Peterborough advanced towards Valencia and by the end of the year, the Archduke was already in control of most of Catalonia and the Kingdom of Valencia. John Leake was commissioned to patrol the Mediterranean, and then headed to Lisbon to repair and replenish the fleet.

The Bourbon Philip V refused to give up and, aware of the danger posed by Barcelona, now in the hands of the enemy, he decided to recapture the place. On 14 March 1706, arriving from Madrid, he met in Casp with the Maréchal de Tessé, sent from France to assist him in this entreprise. On 17 March, they set off from Casp and marched at full speed towards Barcelona, leaving Lleida, which was occupied by the Allies, in their rear. Furthermore, new reinforcements were sent from France under the command of Adrien Maurice de Noailles, the governor of Perpignan, while a fleet under Louis Alexandre de Bourbon sailed from Toulon, with cannon and ammunition. 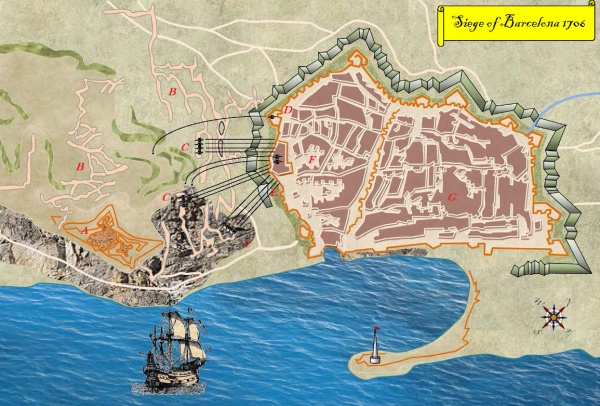 The Bourbons, with the presence of King Philip V himself, had 18,000 men and the support of the fleet of Louis Alexandre de Bourbon.

The Defenders of Barcelona

To defend Barcelona, Archduke Charles had 8,500 men (4,500 members of the Coronela, 2,000 Allied foot (British, Germans and Dutch), about 1,000 regular Catalans within the Regiment of Royal Catalan Guards and the Barcelona Regiment, and 1,000 Catalan volunteers. There were also about 400 dragoons, of which 250 were Catalan and the rest British.

On 5 April, Leake received a letter from Archduke Charles informing him that the Bourbon intended to besiege Barcelona, and asking for his help.

On 19 April, Sir George Byng arrived at Altea with a reinforcement of 14 ships of the line.

The allied fleet then headed to Majorca and from there to Tortosa.

On April 26, 2,000 men of Lord Peterborough embarked aboard the fleet at Tortosa. Believing that the French ground forces might make a desperate assault on Barcelona, Leake ordered Byng and Wassenaar to sail forward.

The Life of Philip V in Peril

Meanwhile, on April 3, the siege began under the supervision of Philip V who was residing at Sarriá. So, the two pretenders of the crown were found facing each other within a few km.

The Franco-Spanish army had rapidly reached Barcelona but, at the same moment, several groups of volunteers and migueletes were arriving to help the defenders of Barcelona.

Bac de Roda was commissioned to guard and defend the Castle of Montjuïc, at the head of 600 men.

On the night of 5 April, a groups of volunteers and migueletes, commanded by Count Cifuentes, attacked the residence of Philip V and almost managed to capture the king. He made a narrow escape, losing all his personal belongings. After this incident, he preferred to sleep on board a French ship.

On 7 April, Bac de Roda , who was posted in the Castle of Montjuïc with 600 men, broke through the trenches that the Franco-Spanish had dug on the height of Santa Madrona to isolate the castle from the City of Barcelona.

On April 12 at 9:00 a.m., a total solar eclipse took place, it lasted for two hours. This natural phenomenon was witnessed as a bad omen by the Bourbon troops, as a warning of great imminent disaster.

On 19 April, the Castle of Montjuïc, which the Maréchal de Tessé considered as the key to the capture of Barcelona, was attacked with artillery and most of the infantry, but Arthur Chichester (Lord Donegal) resisted with 700 British.

Archduke Charles, although he could easily flee by sea, decided to wait for the relief fleet, and die if need be.

On 26 April, the Castle of Montjuïc fell into the hands of the Bourbon after a fierce resistance by Lord Donegal.

Philip V then turned his attention on Barcelona. The city wall was attacked with artillery in the San Antonio area, where a major breach was made.

Louis Alexandre de Bourbon's fleet fled upon learning of the great Allied fleet that was approaching.

On April 27, the Allied troops managed to enter the city, landing in fishermen's boats. The Bourbon, who could have offered resistance, fled in complete disorder and, being pursued by the migueletes, abandoned their artillery and ammunition.

Philip V had to seek refuge in France to later return to Spain through Navarre.

Catalonia was from then on definitively in Allied hands. Troops not destined for Catalonia embarked, and, on 13 May, Charles Mordaunt (Lord Peterborough) landed in Valencia. While in Altea, a Council of War was hold that determined to undertake the siege of Cartagena, where the local inhabitants wanted to side with Archduke Charles.

Summary: 18,000 men and the fleet of Louis Alexandre de Bourbon