At the beginning of the campaign of 1710, the Bourbon army, established near Lleida, comprised 58 bns and 66 sqns. Philip V could also count on the troops operating in Extremadura and on the guerillas. He also planned to recruit 7,500 men in the region of Flamenca to defend their own territory. Consequently, Philip V disposed of a greater number of troops than the previous years. These troops were mostly concentrated near Lleida and on the Portuguese border. After some discussions, mainly with his patron Louis XIV of France, Philip appointed the Spanish Francisco del Castillo, Marquis of Villadarias to command his army and Antonio de Amezaga as commander of the cavalry.

For their part the Allies could only field a weak army which had not totally recovered from the losses incurred at the Battle of Almansa, three years before. Archduke Charles was hoping for reinforcements to start the new campaign. He really needed to reinforce his position if he wanted to preserve his conquests in Catalan territory. Accordingly, Emperor Joseph I accepted to transfer a force of 5,000 men from Italy to Spain and the Dutch contributed 1,000 recruits.

On July 25, to avoid an attack against his flank, Philip V gave orders to the cavalry and the grenadiers to make a wide detour to cross the Noguera Ribargozana River at Alfarràs, while the main body of his army would set off from Lleida and follow this vanguard. 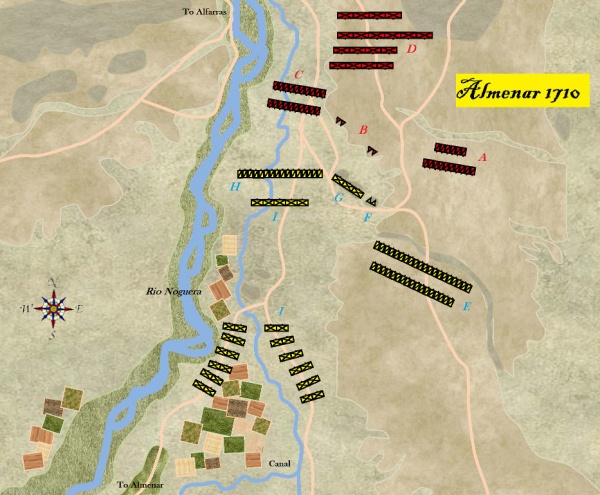 The Franco-Spanish army was deployed in two lines (the first with 22 sqns and the second with 20 sqns), while 5 bns deployed between these two lines and the right flank (the closest to the banks of the Noguera River).

Even though the Franco-Spanish were closer to Alfarràs than the Allies, the latter’s cavalry under Stanhope and George Carpenter was the first to reach the bridge at 6:00 a.m. on July 27.

Around noon, Stanhope crossed the Noguera with the cavalry of the Allied left wing. He then decided to take position with 26 sqns on the plateau of Pla del Sas overlooking the road, instead of advancing southward on the road on the right bank of the river, where he would have been exposed to an attack. From his positions on the plateau, it would be much easier to spot the advance of the Bourbon army and to prevent it from reaching Alfarràs, thus allowing the Allied army to cross the Noguera unhindered.

In the morning as his army reached Almenar (more precisely Almenara), Villadarias was taken by surprise when he realised that elements of the Allied army (Stanhope’s vanguard) had already crossed the Noguera River at Alfarràs and taken position on a height near Almenar.

Villadarias did not fully deploy his troops in battle formation. Despite being superior in number, he did not dare to attack the Allied vanguard, and divided his army into two parts: the first, comprising artillery and infantry, advanced to the low ground bordering the Noguera River. The second, comprising the cavalry, was charged to protect the left flank of the marching columns.

King Philip V and Villadarias, who accompanied the infantry columns advancing slowly along the road running at the foot of the plateau, they could not see the Allied army gradually deploying on this height.

Seeing the weak position of the enemy, Stanhope asked Archduke Charles and Starhemberg for permission to attack, but was not authorised to proceed. At that time, the Bourbon had deployed only the troops of the Duc of Sarno while the Allied army had not yet reached Almenar. Therefore any offensive action could have been very risky.

Stanhope then personally rode to meet Archduke Charles and Starhemberg, hoping to obtain permission to attack. The attack was still really risky: the Bourbon forces at Fenollet were far superior in number to the Allied cavalry. From Stanhope’s position on the Pla del Sas, it was not possible to see the bulk of the Franco-Spanish cavalry force assembling on the Pla de Fenollet. Stanhope did not know that he was facing more than 40 sqns.

Fearing that the Franco-Spanish would retire to a stronger position (probably Lleida) during the night, and seeing how it was poorly deployed, Starhemberg, whose troops had now all crossed the Noguera, finally authorised General Stanhope to attack the Bourbon forces. Starhemberg and Archduke Charles also decided to support Stanhope’s charge by establishing a battery (about 14 cannon) on a hill near Almenar overlooking the enemy positions.

Around 6:30 p.m., Stanhope, who was posted on the Pal del Sas launched the charge with the cavalry of the left wing formed in two lines (a first of 22 sqns and a second of 20 sqns) with 2 bns between these lines. It advanced at a slow trot to maintain a minimum cohesion of its lines.

When they detected this movement, the advanced elements of the Franco-Spanish cavalry retreated on the main body of the cavalry deployed in two lines on the Pla de Fenollet since several hours.

The Bourbon infantry was too distant to support its cavalry, which was nevertheless superior in number to Stanhope’s cavalry.

The Bourbon cavalry was unprepared because their commanders considered that Stanhope’s small cavalry corps would not dare to attack and that it was only a feint. Furthermore, the sun was setting and the Allied positions could be seen very clearly.

Stanhope momentarily halted to extend his first line with 6 sqns from the second and, as he got within 200 m. of the enemy, he ordered to charge. His sqns changed from slow trot to fast trot while trying to keep a tight formation.

Around 7:00 p.m., Stanhope’s cavalry crashed into the ranks of the Franco-Spanish cavalry. Amézaga, the commander of the Bourbon cavalry, fought in t the first line. Stanhope’s cavalry drove back the first line but soon Amézaga sent forward the 20 sqns of his second line. Nevertheless, the left wing of the Franco-Spanish cavalry began to waver and then gave way, while the right wing was gradually gaining ground against the British cavalry.

A last charge finally broke the Bourbon cavalry, which routed, leaving to their fate the infantry posted at Almenar and the bulk of the army formed in columns behind the Pla de Fenollet.

During this cavalry combat, the Austrians simultaneously attacked the Bourbon right wing infantry, inflicting heavy losses to the Reales Guardias Españolas. The colonels Marquis de Gironella and Don Juan de Figueroa died there. Philip V risked his life, as was customary for him, and had to be rescued by the Reales Guardias de Corps, who protected his retreat to Lleida, where he arrived the next day.

The Allies pursued the Bourbon cavalry. Pursuers and pursued then crashed into the ranks of the Bourbon infantry, throwing it in utter disorder and sending it in an uncontrolled rout towards Lleida. The Duc of Sarno died fighting as he tried to rally his troops.

The night saved the Bourbon army from total annihilation.

In this battle, the Allies lost 400 men, including the Earl of Rochford, who was killed as his regiment broke through the Spanish lines.

The Franco-Spanish lost 1,000 men killed and 3,000 taken prisoners. Among them was General Engineer Prospero de Verboom, who was seriously wounded and taken prisoner to Barcelona, where he would remain a prisoner until 1712 and would take advantage of the prison time to outline his proposal for the creation of the Royal Corps of Engineers.

Tactically, the battle was of little relevance. King Philip V took refuge in Lleida where he removed the Marquis de Villadarias from command, replacing him by the Marquis de Bay, who arrived on August 15 from Extremadura.