The troops loyal to King Philip V who had been defeated at the Battle of Almenar on 27 July 1710 then evacuated Catalonia and the capital of Aragon. Their commander, the Marqués de Bay, established his camp (approx. 20,000 men) between the Ebro River and Mount Torrero.

On August 15, Field Marshal Starhemberg attacked the Bourbon army with 28 squadrons. The squadrons of the Ordenes Viejo Cavalry, Rosellon Viejo Cavalry, Real Asturias Cavalry and Pozoblanco Cavalry, along with the Reales Guardias Valonas responded to the attack and repelled the enemy cavalry, capturing seven standards. This engagement was followed by numerous skirmishes for five consecutive days.

The Allied army in turn traversed the Ebro on August 19 and deployed in order of battle overnight. 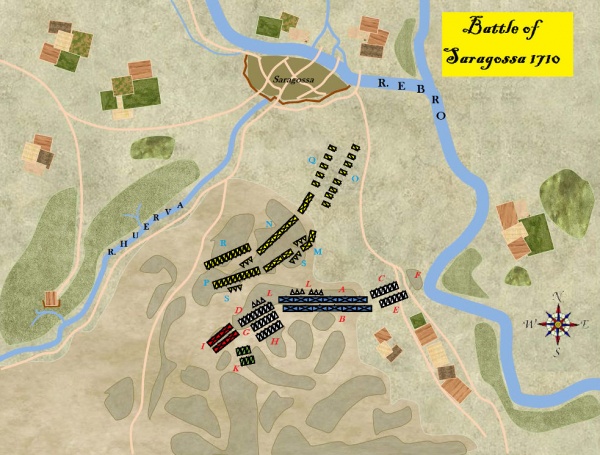 The 20,000 troops of Philip V under the Marqués de Bay formed an arched line with their backs to the city, from the right bank of the Ebro to the Montes de Torrero, defending Saragossa. Opposite them were the 23,000 soldiers (14,000 were German) of Archduke Charles who awaited results in the Cartuja de la Concepción. The left wing of the Allies consisted of Aragonese-Valencian-Catalan and Dutch regiments under the command of the Conde de Atalaya, while the right wing consisted of an Austro-British expeditionary corps under James Stanhope. The center of the army was composed by German troops commanded by Field Marshal Guido von Starhemberg himself.

All the Saragossans who wanted, and who did not have to fight as soldiers, climbed to the summits of the Montes de Torrero to be spectators of the fierce battle that was going to be fought in the highest areas of the present neighborhood of La Paz, from where the attacking Allies who came from the area of La Cartuja could be seen, by Montemolin, attacking the defending troops.

The right wing of the Bourbon army was under the command of Lieutenant-General José Acroy, Duc d’Havré, and Generals Mahoni and Amézaga, with Spanish and Irish troops, and a force of Spanish cavalry. To oppose them, Field Marshal Starhemberg placed Spanish, Dutch and Portuguese troops on his left wing with Lieutenant-General Stanhope at the helm of the cavalry, and General Count Belcastel at the head of the infantry. The left wing of the Bourbon army was commanded by General José de Armendáriz and Prince Tserclaes-Tilly, with Spanish, French and Walloon troops. In front of them, on the right of the Allies was Lieutenant-General Baron Wetzel and General Conde de Atalaya, with British and Austrian troops. The Bourbon center was under the command of the Marqués de Bay and Lieutenant General Sello with Spanish, French and Italian troops. In front of them, the German troops of the Allied center were commanded by Field Marshal Starhemberg.

The battle began at the start of the day with artillery bombardment.

In the middle of the morning, the Allied troops began to advance. Bacallar, Castellví and Boyer offer different versions of what happened during the battle but it could be inferred that it developed as follows: the Allied left flank took the initiative and while both cavalry collided without a clear result, the Imperialist infantry ended up prevailing. On the right flank, the Bourbon cavalry put their Allied counterparts on the run, leaving the field in pursuit. This allowed the Imperialist infantry to reorganize and counterattack, winning the field to the enemy with great effort. Finally, the German infantry took advantage of the terrain when the Bourbon center – animated by the evolution of their cavalry – came to meet them. However, they were unable to sustain the clash and, threatened with flanking, retreated, dragging the rest of Philip of Anjou's troops with them.

There were brigades that were decimated, such as the Armada infantry brigade (Armada, Cádiz, Trujillo and Pamplona. Only 10 officers and 50 soldiers remained from the Regimiento de Cádiz. For their part, the brigades of Ruppelmonde, Ibañez and Triana suffered very heavy casualties, so that only 1,000 survivors remained, most of them unarmed.

Archduke Charles entered Saragossa on 21 August, where he stayed for five days. As a result of the battle, all of Aragon came under the influence of the suitor. On 6 September, the Allies triumphantly entered Calatayud. On 9 September, Philip V and his family left Madrid amid popular fervor, arriving in Valladolid on 16 September. On 28 September, the suitor's troops entered Madrid surrounded by general hostility.

N.B.: our order of battle is based on the Allied order of battle at Almenar which took place less than a month before the present battle. Since the Allies suffered few casualties at Almenar , we assume that all their troops were also present at Saragossa.