In 1707, after their defeat in the hard-fought Battle of Almansa, the Allies were forced to move on the defensive as reinforcements were requested to Vienna and London. From Vienna, Field-Marshal Starhemberg, one of the best generals of the empire who had served under Prince Eugène de Savoie, set out with reinforcement. Additional troops would also arrive from Great Britain under Stanhope's command.

In 1710, the Allied army, now under the command of Starhemberg, launched an offensive. In a quick and brilliant campaign, he defeated the Bourbons in the battles of Almenar (27 July) and Saragossa (20 August, aka Campo Torrero). These repeated defeats forced Philip V to evacuate Madrid and to take refuge in Burgos. Thus for the second time during this war, the Habsburg candidate entered the capital.

The reception on that occasion, was not different from the previous one and it soon became apparent that taking the capital did not make Archduke Charles master of the kingdom. Everywhere guerrillas rose and harassed the rear of the Allied army and hindered its communications with the City of Barcelona. Vallejo and Bracamonte were the main leaders of the guerrillas. They ended up coordinating their actions with the regular army, this being a key factor in the present battle and in the Battle of Villaviciosa.

Meanwhile, on the Bourbon side things were changing. Despite the defeats in Europe and the generally hostile atmosphere in France to the continuation of the war, Louis XIV, given the harsh conditions of the Allies for the signing of peace, decides to make an effort and to send new troops under the command of the Duc de Vendôme, a member of the Bourbon family. The expertise of this general changed the course of events.

As a first step, Vendôme occupied Almaraz, a place between Portugal and the Allied army, which had just taken Toledo. In a meeting of the Allied General Staff, it was decided to leave Toledo for Barcelona, given the difficulty of living in totally hostile territories. Accordingly, the Allies initiated a retreat to Aragon, for which they divided their army into three columns: British, Austrian and Dutch, and Portuguese. The British decided to march a few km from the other columns as food was scarce along their itinerary. Accordingly on 4 December, in agreement with Starhemberg, the British column (7 bns, 8 sqns) under Stanhope moved away towards Brihuega, which it reached on 6 December, while Starhemberg reached Cifuentes, the rendezvous agreed upon with the British.

Unknown to them, the guerrillas of Vallejo and Bracamonte had reached the vicinity of Brihuega.

In the evening of 6 December, Stanhope, seeing no enemy, decided not to fortify the village of Brihuega, nor to establish patrols.

On the morning of 7 September, Stanhope realised his huge mistake when he saw Bourbon troops occupying the bridge over the Tajuña and surrounding Brihuega. Stanhope was surprised at the appearance of the bulk of the Bourbon army, which he thought to still be far away.

Stanhope had barely time to try to fortify the village as best as possible and to send his assistant, Crosby, to seek Starhemberg's support. By the end of the day, the British had erected a palisade around Brihuega.

In fact, Vendôme had set out from Talavera with his troops, and pursued the retreating British column with a speed perhaps never equaled in such a season and in such a country. The middle aged Frenchman had led his Franco-Spanish army day and night. In typical Vendôme style, he had swum at the head of his cavalry across the flooded Henares River and, in a few days, had overtaken Stanhope. 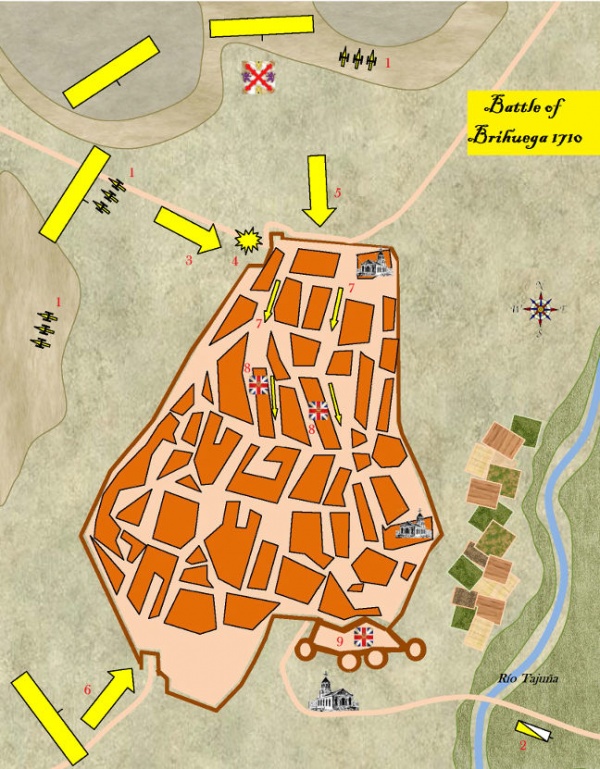 When he saw Vendôme’s Army confronting him, Stanhope said that “Nobody with me, imagined that they had any foot within some days’ march of us and our misfortune is owing to the incredible diligence which their army made.”

As mentioned before, Stanhope had barely enough time to send off a messenger to the centre column of the army, which was some km from Brihuega, before Vendôme was upon him on the evening of 7 December. The next morning the town was invested on every side.

On 8 December, Philip V arrived in person, accompanying the Bourbon artillery train, which immediately began the bombardment of the village.

Around 3:00 p.m., a battery of three cannons commanded by Don Francisco Balbasor, which had been established in front of the city gate, broke the front door and burned it. Then it ruined a house that flanked the gate, which was occupied by the defenders, and tackled the musketry fire coming from the Towers of St. Felipe.

The Franco-Spanish immediately launched an assault through this breach. Balbasor then set his battery in the gap and repulsed the counterattack of the British, allowing the Franco-Spanish infantry to enter into the village, where it fought from house to house. Even the inhabitants joined the fight.

The pro-Bourbon regulars and irregulars coming from all regions of Spain were all burning with the desire to join the assault. They only wanted to end that confrontation in the most drastic way possible. The initial attack was on the Cozagon, and immediately lashed out at the gate of San Felipe and the Puerta de la Cadena. In that first attack, the Extremaduran climbers showed the greatest soldierly ardour, but many other regiments raised their flags high in their efforts.

And while these events took place at the door of St. Philip, the troops who were heading against the Puerta de la Cadena achieved their goal by crippling the efforts of the British and throwing them back at the point of the bayonets into the street, where they were annihilated by the artillery of Valdecañas.

At the Portillo, the guns had opened a high gap in the wall and the Ferrar Dragoons and Monroy Dragoons rushed towards the breach. The British grenadiers skillfully drove back their uncovered enemies as they reached “the foot of the wall and instantly calculated the distance that separated them from the desired height, standing the dragoons on top of their mounts and throwing themselves into the hole defended by General Carpenter in person.”

The British kept up a terrible fire till their powder was spent. Then they set fire to the buildings which their assailants had taken but in vain.

Combat did not even cease with the night. Given the impossibility of sustaining himself longer, Stanhope decided to ask for an armistice that Vendôme rejected, answering that if the British did not capitulate within an hour, he wouldn't give quarters.

The British lost approx. 600 men killed, and 3,400 wounded. Colonel Varrier of the Scots Life Guards was killed during the assault and Lieutenant General Carpenter was wounded.

The entire British contingent was escorted to Castile as prisoners of war.

Stanhope justified his defeat by the “lack of ammunition,” although some of his subordinates said “that he had commanded them to lie into a well so that he could use this excuse." The British and German generals blamed each other for the disaster. “This made great sense in London, and it was decided not to send more troops to Spain, and instead contribute money if war continued.”

Scarcely had Vendôme signed the capitulation, when he learned that Starhemberg was marching to the relief of Stanhope.

On December 10, the two armies met in the sanguinary Battle of Villaviciosa, after which Starhemberg resumed his retreat.

The British troops did not remain in captivity for long before they were exchanged and sent home in October 1711.