When Field-Marshal Starhemberg was informed of the attack on the British column at Brihuega, he marched with his troops to come to the relief of Stanhope's column, unaware that the latter had already capitulated.

The next morning (December 10), the Franco-Spanish army was waiting on the plain of Villaviciosa. Compared to the Austrian general's 14,000 troops, the Duc de Vendôme deployed about 20,000 men (including King Philip and other troops who had joined the duke that morning. The armies deployed in two lines on parallel ridges. 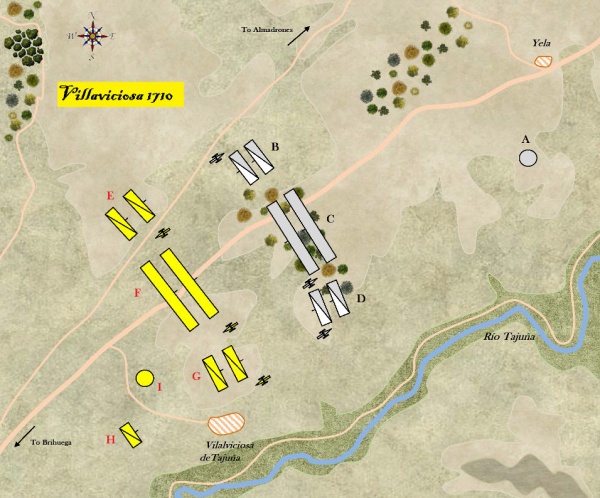 The engagement began in the early afternoon. It started by an artillery duel between the two armies which had an equal number of artillery pieces (23), each deployed in three batteries. Both armies suffered significant losses from the cannonade.

King Philip V, who was accompanying the cavalry of the Franco-Spanish right wing, then gave orders to the Marquis of Valdecañas to hurl his squadrons against the left wing of the Allies, which comprised German infantry and Catalan and Portuguese cavalry, all of them under von Frankenberg.

The German infantry tried to protect the Catalan and Portuguese squadrons, but eventually gave in, and the left wing of the Allied army was soon shattered. The Bourbons took the Allied batteries, destroyed the units that came in reinforcement and began the pursuit, leaving no possibility for the Allied cavalry to rally and return to support the centre.

The infantry of Archduke Charles then advanced towards the Franco-Spanish centre. Hard pressed by the Allied centre and in the absence of cavalry support, the Bourbon infantry was pushed back.

The Marquis de Toy then tried to prevent a breakthrough in the centre, which would separate the Bourbon army in two isolated parts. While doing so he was nearly captured by Portuguese soldiers.

As the Bourbon infantry tried to resist to the thrust of the Allies in the centre, the Duc de Vendôme was considering the battle as lost.

As Vendôme’s centre was gradually ceding terrain, the Count of Aguilar, posted on the left wing, launched his squadrons against the right wing of the Allies, which was commanded by Field-Marshal Starhemberg in person, and consisted of the grenadiers and horsemen of the best regiments of the Allied army. However, Aguilar’s charge was unstoppable, and the Allies were unable to contain the Bourbon squadrons. The Archduke's right wing was saved from disaster by a flank maneuver by the Allied centre, under Villarroel, who came to Starhemberg's aid and saved the situation.

Field-Marshal Starhemberg managed to rally and reorganise his forces, and eventually repulsed Aguilar’s cavalry and pursued them. He took the Bourbon artillery pieces on their left flank and launched himself into the Bourbon center. The fight became intense. The Reales Guardias Valonas and Saboya Infantry received a harsh punishment from the enemy fire. Lieutenant-General Armendáriz, was wounded in the head and chest by shrapnel. Maréchal de camp Ronquillo, Brigadier Rodrigo Correa and Colonel Félix Miramón were killed.

As the Bourbon centre continued to yield, the left wing began to recede and there were no signs of the cavalry of the right wing, engaged in the pursuit of the enemy. It was beginning to darken. At this moment, the Count of Aguilar lashed out with his cavalry and dragoons against the right wing of the Archduke. The German and Portuguese cavalry, under the command of the Count de las Torres, initially resisted the charge. Finally, Aguilar’s squadrons broke the two lines of the enemy right.

Around the same time, the Marquis of Valdecañas reappeared on the battle field at the head of the cavalry of the Bourbon right wing, and broke the lines of the allied left. Lieutenant General-Mahony and Maréchal de camp Amezaga charged frontally with their squadrons of the right wing, landing a final blow to the Allied army.

Field-Marshal Starhemberg launched three cavalry counter-charges against Mahony’s and Amézaga's attack. During the melee, Maréchal de camp Amézaga was wounded in the face. The fighting continued after sunset. At last, Starhemberg's forces took refuge in a neighbouring forest to save themselves from the enemy cavalry. The Allied army then began retreating under the cover of darkness. 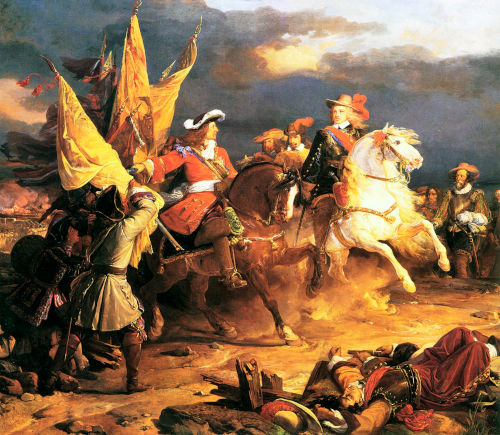 The battle had been decided by the squadrons of the Marquis of Valdecañas and the Count of Aguilar, who far outnumbered the enemy cavalry.

Even though Archduke Charles claimed victory, it soon became evident, considering the death toll, the loss of most of his artillery and the fact that the Franco-Spanish had remained masters of the battle field, that he had suffered a defeat.

Despite the tactical tie, the battle was a success for Vendôme, as the Archduke's army, although he managed to continue his withdrawal in an orderly manner, was further weakened and harassed at every turn by the irregulars and the Franco-Spanish cavalry. By the time they arrived in Barcelona on 6 January 1711, it had been reduced to some 6,000 or 7,000 men, and the city was practically the only Spanish enclave to recognize the authority of Archduke Charles.

As Torcy, the French foreign secretary, noted, the battle of Villaviciosa “placed the Crown on the head of the Catholic King”.

The following regiments formed part of the Imperialist army

N.B.: The whole Allied left wing under Stanhope had already been destroyed in the Combat of Brihuega one day before