For the campaign of 1710 in Flanders, the Allies considered two options: a march downstream along the Lys River to the coast; or an advance on Douai on the Scarpe River and eventually on Arras. It was finally decided to capture the Fortress of Douai.

The Maréchal de Villars still being at Versailles, the French Army of Flanders was commanded by Maréchal d'Artagnan Duc de Montesquiou, who had received orders to defend the Lines of Cambrin.

On 21 April, General Cadogan broke through the Lines of Cambrin at Pont-à-Vendin. Montesquiou could not do much against Marlborough's surprise advance in the direction of Douai. 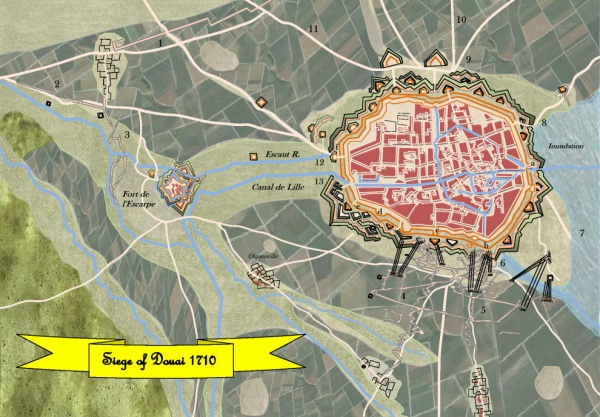 Map of the siege of Douai in 1710 – Courtesy: Dinos Antoniadis

Douai (aka Doway in English) was an important city of Flanders, located on the Scarpe River, a tributary of the Scheldt (aka Escaut in French). The city is located some 25 km of Arras, 30 km from Cambrai and 32 km south of Lille. From 1560 until the French Revolution, it was the seat of a prominent university, founded under the patronage of Phillip II, when Douai still belonged to the Spanish Netherlands. It had been taken by Louis XIV in 1667, and officially ceded to France in 1668 by the Treaty of Aix-la-Chapelle). The king spent large sums to fortify the place, which was surrounded by a double-ditch and by defensive works (covered way, ravelins and counterguards) covering the old walls. Less populous than Lille, Douai embraces a wider circuit within its ample walls. Its principal defense consists in the marshes, which, on the side of Tournai, where the attack might be expected, render it extremely difficult of approach, especially in the rainy season. On its weakest side, access to Douai is defended by Fort Scarpe, a powerful outwork located downstream, capable of standing a separate siege.

Lieutenant-General d’Albergotti commanded the garrison of Douai (7,500 men in 20 bns, 6 sqns). The units of the garrison had not yet received their recruits. Albergotti was seconded by the maréchaux de camp Marquis de Dreux and M. de Brendlé; and by brigadiers Duc de Mortemart, Comte de Lannion and M. Destouches. The engineers were under the command of the Maréchal de Camp de Valori; and the artillery, under the Chevalier de Jancourt. M. de Pomereuil was governor of the city.

The place was well supplied in provisions and ammunition to sustain a long siege.

On 22 April, the Allies marched from Lens to Vitry and seized all passages across the Scarpe from Arras to Douai. Montesquiou retired to Oisy, near Arleux. Around noon, the Allies began to work at the investment of Douai.

On 23 April, Monstesquiou retired from Oisy to Cambrai with 51 bns and 59 sqns. He kept only 30 bns and 15 sqns and sent the rest of his troops in various places.

On 25 April, the Allies began working at a circumvallation line around Douai. The right of this line was anchored to the canal of the Deule River, downstream from the bridge of Auby, it then crossed the Équerchins stream behind the village of Auby and extended up to Brebières on the Scarpe River. The line then crossed the Scarpe at Corbehem; and the Moulinet Canal at Férin and extended towards Dechy, up to the marsh of Sin (present-day Sin-le-Noble). On the other side of the marsh, it continued from Lallaing up to Pont-à-Râches (probably Râches). From this location up to the bridge of Auby, the marsh and the canal of the Deule made any approach towards Douai impracticable. Furthermore, a dyke was built on the Scarpe near the mill of Biache to redirect water to the Sensée River at Sailly. A post occupied by 500 men was established at Arleux.

On 28 April, all the Allied infantry encamped behind this circumvallation wall. Most of the Allied cavalry was sent in the direction of Marchiennes and encamped with its right at Raimbaucourt and its left at Bouvigny. Prince Eugène established his headquarters in a castle between the right of the army and the Scarpe Fort; Marlborough, at the Flines Abbey; and Tilly at Lallaing. In these positions, the Allies could easily draw their supply from Lille and Tournai.

The siege was supervised by the princes of Orange and Anhalt and covered by Marlborough and Prince Eugène.

In the first days of May, part of the siege artillery arrived from Mons, Ghent and Tournai.

On 4 May, considerable engineering works drained the double ditch surrounding the town. The investment was now completed.

On the night of 4 to 5 May, the trenches were opened in two locations, between the Ocre Gate and the Équercin Gate. The right attack was under the Prince of Anhalt-Dessau, that of the left under the Prince of Orange. The two attacks were linked by a line of communication on the road from Douai to Béthune.

On 7 May, the head of the sap was advanced to within 230 m. of the exterior palisades.

On the night of 7 to 8 May, the besiegers experienced a severe check from a vigorous sally of the besieged with 1,200 men, by which 2 British rgts were nearly cut to pieces.

On 6 May, a great train of artillery, consisting of 200 pieces, with a large supply of ammunition, arrived from Tournai at the Allied camp.

On 11 May, the advanced works were strongly armed, and the batteries were pushed up to the covered way, where they thundered across the ditch against the rampart.

On 15 May, the Allies relocated their batteries closer in their final positions.

On 19 May in the evening, the Allies attacked four ravelins, but they were driven back with a loss of 700 men killed or wounded.

On 20 May, Prince Eugène and Marlborough advanced to Saint-Éloy with 40 sqns to reconnoitre the country and identify good defensive positions to prevent the intervention of the French army.

On 21 May, the Allied managed to occupy the four ravelins, which they had attacked two days before. The same day, Villars broke up from the vicinity of Cambrai with his army (155 bns and 262 sqns) and advanced towards Douai. Marlborough and Eugène immediately made the most vigorous preparations to receive him. They left only 30 bns to prosecute the siege; 12 sqns in observation at Pont-à-Râches; and the remainder of the army, about 60,000 strong, were concentrated in a strong position, so as to cover the siege. Every man in both armies expected a decisive battle. However, Villars retired without fighting, considering his army too weak to attack the besiegers.

On 22 May, the Hessian Contingent joined the Allied army before Douai. The Fort of Scarpe was breached, and the sap was advanced to the counterscarp of the fortress, the walls of which were violently shaken.

On 24 May at 2:30 a.m., the Allies attacked the two remaining ravelins which were each defended by 50 grenadiers. The Allies made themselves masters of these ravelins after a stubborn resistance.

On 26 May in the evening, after negotiations, the capitulation of Douai was signed.

On 27 May, the Allies took control of Douai and Fort Scarpe.

During the siege, the French lost 3,500 men and the Allies, 8,000 men. A great percentage of losses in both armies was due to typhoid fever and dysentery.

Albergotti, having received honors of war retreated with 4,500 men. The Allies were then free to march on Arras.

The detailed order of battle of the entire army is known (see Nafziger Collection – Armies of Prinz Eugene and the Duke of Marlborough in Lager by Douai May 1710) but not the composition of the siege corps.