In September 1709, after the battle of Malplaquet, the Allies marched on the Scarpe. On 28 April 1710, they undertook the Siege of Douai, which capitulated on 26 May. After an unsuccessful attempt in the direction of Arras, Marlborough decided to secure his line of communication with Flanders before undertaking the siege of this place. To do so, he turned his attention to three fortified towns to the west of Lille on the Upper Lys River: Béthune, Saint-Venant and Aire.

In preparation for these sieges, Marlborough marched west on the Vimy Ridge and took position between the Scarpe River and the Lys. From this strong position near the Abbey of Mont-Saint-Éloi, he could cover these sieges which he confided to Prince Eugène de Savoie. The first objective was the capture of the Fortress of Béthune.

The Maréchal de Villars, who had been specifically instructed to act defensively, left Béthune to its fate, employing his army in the erection of new defensive lines.

By 1645, the city of Béthune belonged to the Dutch Republic. The same year, the French besieged and captured the place. In 1659, at the Treaty of the Pyrenees, Louis XIV annexed the place, putting an end to the claims of Spain. He then charged Vauban to reinforce the defensive works of the place. 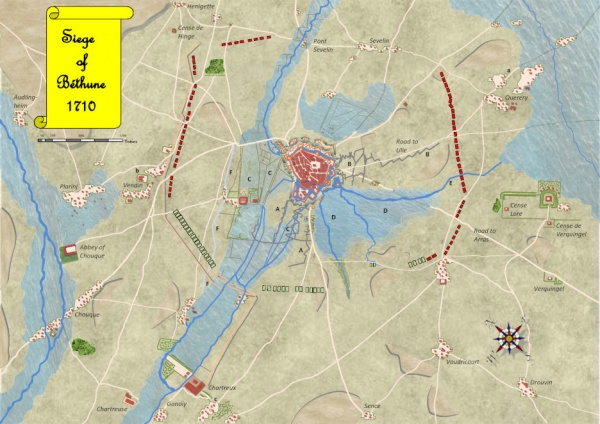 Map of the siege of Béthune in 1710 – Courtesy: Dinos Antoniadis

Lieutenant-General Dupuich-Vauban, governor of the Fortress of Béthune and nephew of the great Vauban, had already taken measures to supply the place for several months. He was seconded by the Maréchal de camp de Roth and brigadiers de Mony, du Thil and de Saint-Sernin.

Note: the following description is mostly based on the journal of the siege by M. des Forges, chief engineer of the Fortress of Béthune.

On 15 July, Generals Schulenburg and Fagel invested the Fortress of Béthune with 30 bns and 18 sqns. The troops of the garrison were distributed in the places of arms of the covert way. Lieutenant-General Dupuich-Vauban ordered to set fire to the suburbs and to raze the hedges neighbouring the place and to open the locks to flood the surrounding plain.

On 16 July, the Allies diverted the Lawe River from Béthune towards the territory of Gosnay. They also dug a new canal to drain the floods.

On the night of 23 to 24 July, the Allies opened the trenches in front of Béthune. Fagel, charged of the attack on the right, established his first parallel at some 300 m. of the glacis.

On the night of 24 to 25 July, Dupuich-Vauban sent 9 grenadier coys, 6 piquets, 200 horse and 50 workmen against the left of the first parallel. They razed more than 400 m. of siege works. The attack lasted some 45 minutes.

On 27 July, General von der Schulenburg opened the trenches of the left attack, in front of the Saint-Prix Gate, near the castle and the inundation.

On 29 July, the Allies began to work in front of the Aire Gate and Rivage Gate.

On the night of 16 to 15 August, the Allies unsuccessfully tired to cross the counterscarp of Béthune.

On 19 August, Marlborough and Prince Eugène sent a reinforcement of 8 bns and 25 sqns to the siege corps.

On the night of 19 to 20 August, Schulenburg attacked the counterscarp and the covert way near the Saint-Prix Gate. The first assault was driven back, but around 4:00 a.m., his troops managed to occupy a lodgement. In this action, the Allies lost approx. 800 men.

On the night of 22 to 23 August, the garrison made a sortie and drove the Allies out of the lodgement, which they occupied.

On the night of 23 to 24 August, Schulenburg reconquered a lodgement on the covert way and his breaching artillery battered the castle and a ravelin.

On 26 August, Schulenburg attacked the ravelin but was driven back. He established additional batteries on the covert way.

On 27 August, after repeated attacks on various fronts against the city, the Allied batteries caused several breaches in the walls. The situation looked desperate for the French: a giant 25 paces wide breach had been opened in the curtain wall. Furthermore, the garrison, now at half-strength, had only two days' worth of bullets and about 200 spare muskets, cannon balls and stones were missing. Dupuich-Vauban had orders from Versailles to conclude an honorable capitulation before being reduced to the very last extremity.

On 28 August, seeing the state of the defensive works of the place, Dupuich-Vauban called a council of war. At 4:00 p.m., the garrison (now reduced to only 1,500 men fit for duty) sounded the chamade and the white flag was raised on the breach of the fortress, in sign of surrender.

On 29 August, the capitulation was signed by Prince Eugène, the Duke of Marlborough, and Governor Dupuich-Vauban and almost all of his senior officers. The garrisons obtained the honours of war.

The Fortress of Béthune had resisted for 35 days. The defenders had lost 435 men killed and 800 wounded. After the capitulation, the place belonged to the Dutch: Baron de Keppel was appointed governor of the city.

The Allies then turned their attention to Saint-Venant and Aire, which were invested simultaneously. The first, weakly garrisoned, fell in 15 days, but Aire caused many more problems.

In 1713, the Treaty of Utrecht would retro-cede the Fortress of Béthune to France. On 29 May 1713, Dupuich-Vauban would enter the city at the head of 3 bns under the acclamation of the population.

Dinos Antoniadis for research and the initial version of this article