Between 17 July and 2 August 1712, Prince Eugène de Savoie at the head of an Imperialist army of 34 bns and 30 sqns blockaded Landrecies, which was hold by the French General du Barail with 6 infantry rgts.

A bridge of boats was established near Ors, and a bridgehead built on the opposite bank of the Sambre River. The entrenchments between Thiant and Denain were defended by the Imperial infantry rgts Deutschmeister and Baden; the Würzburg infantry rgts Fechenbach and Eyb; and the Palatine infantry rgts Isselbach, Effern and Sulzbach. These troops were under the command of generals Secquin, Prince Holstein-Beck and Zobel.

The bridgehead was defended by the Dutch Lieutenant-General Earl of Albemarle with 10 bns and 23 sqns.

On 17 July, the Maréchal de Villars received from King Louis XIV the order to relieve Landrecies. Villars concentrated his army behind the Scheldt River and marched on 19 July and deployed in two lines between Neuville-sur-Escaut and Molain. In the night of 21 July, Prince Eugène concentrated his army between Bermerain and Bousies. The post at Denain was therefore isolated.

On 22 July, Villars crossed the Selle River with his whole army and encamped between Mazinghien and Cateau-Cambrésis.

On 23 July, Villars sent a large detachment on his right, across the Sambre River, to make a diversion.

In the evening of 23 July, M. de Vieuxpont set off from the French camp with 30 bns, a few cannon and pontoons and marched to throw bridges on the Scheldt between Bouchain and Denain. The Comte de Broglie received orders to join Vieuxpont’s Corps with 40 sqns of his reserve, which was encamped at Cateau-Cambrésis.

At nightfall, M. d’Albergotti followed with 20 bns and a few sqns. When the “Retraite” was beaten, the rest of the French army followed, marching by its left. The French army undertook a 30 km long night march. M. de Coigny’s detachment formed the rearguard.

Meanwhile, the Prince de Tingry, who was posted in Valenciennes with a large garrison received orders to advance on Denain with 15 bns and some dragoons, without engaging the Allies before receiving specific orders to do so.

On 24 July at daybreak, M. de Vieuxpont reached the Scheldt River and threw four pontoon-bridges near the mill of Neuville-sur-Escaut without meeting any opposition from the Earl of Albemarle.

The Comte de Broglie arrived at Neuville-sur-Escaut soon afterwards with his cavalry and crossed the Scheldt. Leaving the villages of Lourches and Denain to his right, he advanced to Escaudain. From this village he marched against the fortified lines of communication linking the Allied army with its magazines at Marchiennes, and found them undefended.

Meanwhile, Villars’ army continued to cross the Scheldt on the pontoon-bridges established near Neuville-sur-Escaut. Villars planned to attack Denain from south and west.

Around 8:00 a.m., the Earl of Albemarle was finally informed of the march of Villars’ Army. He fired the six shots to signal the attack and immediately came out of Denain at the head of his cavalry (23 sqns). However, it was much too late to prevent the French from crossing the Scheldt.

Broglie’s 40 sqns drove back the Allied cavalry (a few sqns retired eastwards while others returned to Denain). Albemarle manned the entrenchments with his 10 bns, which were supported by the remaining 16 sqns.

Broglie then intercepted a large convoy of 300 bread-wagons escorted by 1,000 men, heading for Denain to resupply the Allies.

When Prince Eugène was informed of the movements of Villars’ Army, he immediately marched with 40 bns towards Denain. On his way, he was joined by the 7 bns of Lieutenant-General Secquin, who was posted near Thiant.

Around 10:00 a.m., Prince Eugène arrived at the bridgehead. Finding the defensive works in good condition, but realising that the French army was vastly superior, he retired Albemarle’s 16 sqns and baggage from the bridgehead and sent them back to the left bank of the Scheldt. He then sent Secquin’s 7 bns to reinforce Albemarle. These bns took position in the northern part of the entrenchments, which, until then, had been left unmanned. There were now a total of 17 bns in the bridgehead.

After taking these dispositions, Prince Eugène rode back to meet his army which was still on the march. 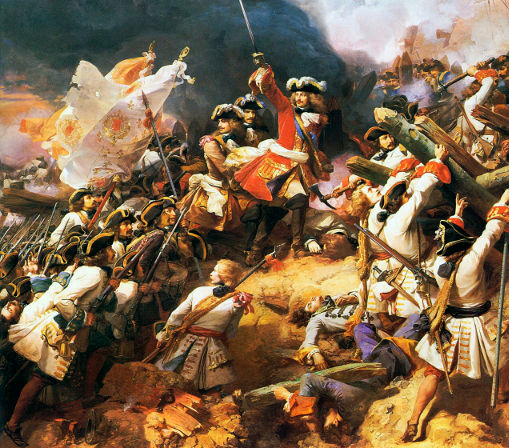 Around noon, the French had already 50 bns, 80 grenadier coys and Broglie’s 40 sqns on the other bank of the Scheldt. Villars and Montesquiou decided to immediately start the attack on Denain with these troops. Villars and Montesquiou led the attack of the right columns while Albegotti led the left columns. The Comte de Broglie had deployed his cavalry (40 sqns) in three lines across the line of communication with Marchiennes, and the Prince de Tingry had reached the plains between Denain and Valenciennes. Furthermore, dismounted dragoons were deployed north of Lourches on the Scheldt River, in preparation for the attack on the southern part of the entrenchments.

Villars and Montesquiou deployed their infantry in several columns, each brigade formed 2 columns, each 3 bns deep, which were headed by grenadiers and picquets.

The main attack should start with all the infantry in two lines against the western part of the entrenchment. The first line consisted of 10 columns of 3 bns (30 bns), each with grenadiers and picquets at their head. The second line consisted of 20 bns. The heavy artillery was deployed in three batteries and some light pieces were interspersed between the columns to support them.

The attack started with heavy artillery fire, to which the 6 guns of the defenders immediately answered.

Around 1:30 p.m. French volunteers and grenadiers jumped into the trenches, the rest of the infantry followed without firing a shot. A Dutch regiment climbed on the breastwork and vainly tried to stop the French at the point of the bayonets. The Allies tried to hold the village and abbey of Denain but they were so closely followed by the attackers that they could not find enough time to rally. Even a flank attack led by Major-General Dohna could not stop the French troops. Albemarle’s troops panicked and fled towards the bridge of boats and the bridge near Prouvy.

However, the Prince de Tingry, who arrived too late to take part in the attack of the entrenchments of Denain, had made himself master of the bridge of Prouvy and established a redoubt near the bridge. He prevented the first elements of Eugène’s Army to cross the Scheldt and come to the rescue of Albermarle’s isolated corps.

Albemarle ordered Dohna to contain the French inside Denain with his remaining bns and to protect the troops fleeing to the aforementioned bridges. But it was too late, Dohnas bns broke and routed too.

Albemarle’s last attempt to stop the routing troops on the bridges failed. The bridge of boats broke and many soldiers drowned in the river, depriving Albermarle’s troops of any escape route and preventing any reinforcements from reaching him.

At this moment, Prince Eugène arrived with his supporting troops but soon realized that the French were too superior in numbers to hope for a reversal of the situation. He then focused on the holding of the Scheldt. The Allies had lost communication with their magazines at Marchiennes and it was impossible to get provisions from Mons due to the stubbornness of the Dutch “Generalstaaten”.

Around 5:00 p.m., the French demolished the bridge of Prouvy, fearing that the Allies would finally manage to force their way across the Scheldt.

The French army spent the night on the battlefield without pitching camp.

On 26 July, Prince Eugène retired eastwards to Bavay and Poix-du-Nord.

Villars immediately laid siege to Marchiennes, which surrendered on 30 July, thus capturing the big magazines of the Allies. On 1 August established a blockade around Douai. On August 2, Prince Eugène raised the siege of Landrecies and decided to retreat to Mons. His army then marched to a camp near Seclin, where it remained until 11 August.

Units present at the camp of Denain (11 bns)

Summary: 133 bns and 200 sqns (several units were still on their way and did not take part in any combat)

Other units are also mentioned:

Nimwegen, Olaf van: War of the Spanish Succession: Battle of Denain in HistoryNet