The siege lasted from June to July 1712

For the campaign of 1712, the Allies had two armies in the Low Countries: an army under British pay commanded by the Duke of Ormond and an Allied army commanded by Prince Eugène de Savoie.

On 7 May, both armies set off from their camp between Neuville-sur-l'Escaut and Cateau-Cambresis and passed the Selle River. Prince Eugène established his new camp just behind the Selle between Douchy (Douchy-les-Mines), Haspres and Solesmes; while the Duke Ormond encamped Solesmes and Crespin; and Albermarle covered communications with Marchiennes. Artillery was placed in the first line between right and left wing of infantry. At his headquarters, Prince Eugène was assisted by General Count Tilly and Dopf; the Prince of Hessen and all generals of the left wing had their quarter in Saint-Python; and G.d.C. Count Colona von Fels and Vehlen and all generals of the right wing were in Saulzoir and Montrécourt.

On 28 May, the siege artillery of the Allies arrived by boats at Marchiennes, escorted by Würzburger and Palatine troops under the command of G.d.C. Vehlen.

In the first days of June, Maréchal Villars received intelligence that the Allies planned to lay siege to Valenciennes or Le Quesnoy. As soon as he learned that the Allies had fixed their choice on Le Quesnoy, Villars considered to relieve the fortress, but he was not sure that the Duke of Ormond and his British army would remain neutral. Even the exchange of several letters between Villars and Ormond didn't clarify the situation. In doubt, Villars didn't dare to advance on Le Quesnoy.

In June 6, the Allied commanders took their dispositions for the blockade and siege of Le Quesnoy.

In the morning of 7 June, while 500 foot and 200 horse protected the bridges and the floodgates, Ormond's Army passed the Selle River between Neuvilly and Solesmes. The siege corps would consist of 30 bns and 20 sqns as detailed in the following table.

After several disputes between Prince Eugène and his British and Dutch allies, the Duke of Ormond decided to remain in the region and Prince Eugène proceeded with the siege of Le Quesnoy. 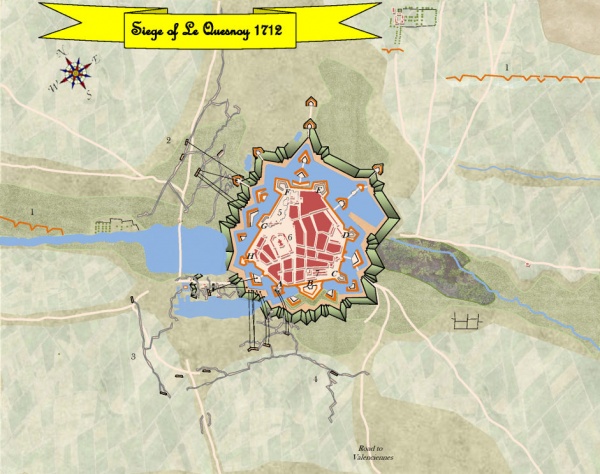 On 12 June, the first pieces of the siege artillery of the Allies arrived in front of Le Quesnoy. They had been transported on wagons from Marchiennes by Denain and escorted by Albermarle's troops.

In the night of 13 June, the Allies completed their entrenchments.

By 19 June, the Allies had completed their circumvallation works.

In the night of 20 June, the Allies opened the first parallel.

Meanwhile in Versailles, the French Court feared an offensive in Soissonnais by the army of Prince Eugène. Accordingly, Maréchal Villars was instructed to send a cavalry corps of 25 to 30 sqns to the Upper-Oise and Somme. This corps was placed under the command of the Marquis de Coigny.

On 28 June, the first Allied batteries opened on Le Quesnoy and soon created a breach in the wall. The garrison made several sorties but without notable success, also the mines used by the French were of no help.

On 30 June, Coigny marched with 3 dragoon rgts to Ribemont where he effected a junction with 17 sqns, raised by the Elector of Cologne, under the command of Comte Saint-Maurice. Coigny was now at the head of 22 sqns.

The commander of the fortress of Le Quesnoy was General Labadie, assisted by the Maréchal de camp de Damas and by brigadiers Jarnac and Lepinay. The garrison counted 5,000 men (10 bns, 1 dragoon rgt) and the place was defended by 60 guns.

The siege was supervised by G.d.C. Baron Fagel. He had 50 guns and 60 mortars. Attacks were planned on the “Bastion Impérial” and the “Bastion Vert”. The main attack was directed against the Bastion Impérial and confided to Directeur Hertel at the head of a Dutch corps. Meanwhile the attack against the Bastion Vert on the left wing was under the responsibility of Directeur Sas van de Bos leading Imperial troops. The right wing was under the command of Lieutenant-General van der Beck; the left, under Lieutenant-General Gersdorf.

In the night of 1 to 2 July, the Allies launched an attack on the covered way with 1,400 grenadiers and 2,000 fusiliers. The garrison repulsed the three first assaults but had finally to retire within the fortifications. The attack had lasted two hours during which the Allies had lost approx. 550 men while the French had 100 men killed and 300 wounded.

On 3 July at 3:00 p. m., the French detonated two mines in front of the “Bastion Impérial”, killing 10 officers and 150 men. It was the last defensive action, the commander of the place asking to capitulate shortly afterwards. Prince Eugène insisted on full capitulation of the garrison who would be taken as prisoners of war. Labadie initially refused these harsh terms.

In the night of 3 to 4 July, the Allied artillery re-opened on Le Quesnoy. Fire broke out in several locations within the town. Labadie was finally forced to accept the conditions dictated by Prince Eugène. Capitulation was signed at midnight. A gate was immediately occupied by 1,200 Allies.

In the morning of 6 July, the French garrison set off from Le Quesnoy. Baron Fagel congratulated Lieutenant-General Labadie to his heroic defence of the place (the French Court did not seem to be of the same opinion and Labadie was later sentenced). As mentioned before, the entire garrison (333 officers and 3,190 men including 1,560 wounded or sick) became prisoners of war. Wounded and sick were transported with wagons to Landrecies. The rest of the garrison was sent to Denain. Albermarle's troops then escorted them from Denain to Marchiennes where they were embarked aboard boats who sailed to Breda by Ghent. Officers were allowed to go home for six months to solve private matters.