The “Treaty of Utrecht” is the general name given to the important series of treaties which in 1713 and 1714 concluded the great European War of the Spanish Succession, and by which inter alia England obtained possession of Newfoundland, Nova Scotia and Gibraltar. 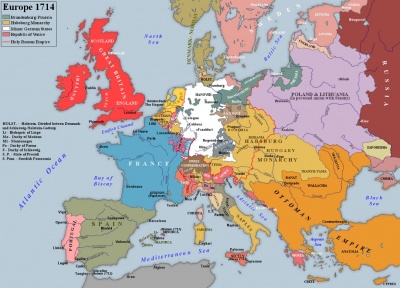 Map of Europe in 1714 published in Wikimedia Commons by user Rebel Redcoat under the Creative Commons Attribution-Share Alike 3.0 license

Worsted, mainly through the genius of Marlborough, in his efforts to secure the whole of the great Spanish monarchy for his grandson, Philip, Duc d'Anjou, Louis XIV made overtures for peace in 1706 and again in 1709. These were rejected, and failure also attended the negotiations between France and the Dutch Republic which took place at Gertruydenberg in 1710, negotiations only entered upon by the Dutch after they had by a treaty with Great Britain (October 1709) secured a guarantee that they would obtain the coveted barrier of fortresses against France. But matters changed greatly during 1710 and 1711. In Great Britain in August and September 1710, the Tories, the party of peace, succeeded the Whigs, the party of war and the inheritors of the tradition of William III, in the conduct of affairs. In the Empire in April 1711, Archduke Charles, Philip's rival for the throne of Spain, succeeded his brother Joseph I as ruler of Austria and became prospective emperor, and Great Britain and the Dutch Republic, having waged a long and costly war to prevent the union of the crowns of France and Spain, were equally averse from seeing Spain and Austria under the same ruler. Moreover, the Allies realized at last that it was impossible to dislodge Philip from Spain, and all the peoples were groaning under the expenses and the sufferings of the war. France and Great Britain came to terms, and the preliminaries of peace were signed in London in October 1711, their basis being a tacit acquiescence in the partition of the Spanish monarchy. The congress opened at Utrecht on 29 January 1712, the British representatives being John Robinson, Bishop of Bristol, and Thomas Wentworth, Earl of Strafford. Reluctantly the Dutch Republic accepted the preliminaries and sent representatives, but the emperor refused to do so until he was assured that these preliminaries were not binding. This assurance was given, and in February the imperial representatives made their appearance. As Philip was not yet recognized, as king, Spain did not at first send plenipotentiaries, but Victor Amadeus II, Duke of Savoy sent one, and Portugal was also represented.

One of the first questions discussed was the nature of the guarantees to be given by France and Spain that these crowns would be kept separate, and matters did not make much progress until after 10 July 1712, when Philip signed a renunciation. Then, Great Britain and France having concluded a truce, the pace was quickened and the main treaties were signed on 11 April 1713.

By the treaty between Great Britain and France, Louis XIV recognized the Protestant succession in Great Britain and undertook to give no further aid to the Stuarts. France ceded Newfoundland, Nova Scotia or Acadia, the Island of St Kitts or St Christopher, and the Hudson Bay Territory to Great Britain, and promised to demolish the fortifications of Dunkerque and to fill up its harbour. A commercial treaty signed between the two countries on the same day provided that each should allow the other the most favoured nation treatment, while each gave up the claim to the indiscriminate seizure of shipping which had been practised during the war.

The treaty between France and the Dutch Republic was mainly concerned with securing the barrier of fortresses. These arrangements were somewhat complicated and to a large extent provisional, as Austria and Bavaria, two countries which were deeply interested in the fate of the Netherlands, had not yet assented to the terms of peace. By a commercial treaty concluded on the same day, France gave to the Dutch commercial privileges similar to those enjoyed by Great Britain. Other treaties concluded at the same time were between France and Savoy, France and Prussia, and France and Portugal. By the first the Duke of Savoy regained Savoy and Nice, taken from him during the war, and France undertook to obtain for him the Island of Sicily and the title of king. By the second, Prussia secured some small additions of territory, including part of Gelderland and Neuchatel; in return France definitely and finally obtained the Principality of Orange. It is interesting to note that as a constituent of the Empire, Prussia was still fighting against France. The treaty between France and Portugal mainly concerned the Portuguese settlements in Brazil, her claim to these being recognized by France.

Other treaties were signed at Utrecht between Spain and the Allies, Philip V now concluding these as the recognized and lawful king of Spain. On 13 July 1713, a treaty was signed between Great Britain and Spain, which embodied certain commercial arrangements previously made between the two countries. Spain ceded Gibraltar and Minorca to Great Britain and promised to give up Sicily to Savoy. She gave also to Great Britain the monopoly for thirty years of the lucrative slave trade with Spanish America, hitherto enjoyed by France: this was the famous Asiento Treaty. Finally, there was an article concerning the inhabitants of Catalonia, who had fought bravely for Charles of Austria, and who had a large claim upon the protection of Great Britain. However, the protection granted to them was a mere sham, and the Catalans were soon the victims of the revenge of Philip V of Spain. The peace between Spain and the Dutch Republic was signed on 26 June 1714, but the conclusion of the one between Spain and Portugal was delayed until the following February. The former was concerned mainly with commercial matters, Spain giving the Dutch Republic the treatment of a most favoured nation, except as regards Spanish America. The latter dealt with the frontier between the two countries and with the colony of Colonia del Sacramento in Uruguay, which was transferred to Spain.

The treaty of Utrecht also provided some compensation for Emperor Charles VI as soon as he surrendered his claim to Spain. It was arranged that he should receive Naples and Milan, and also the Spanish Netherlands, henceforward known as the Austrian Netherlands.

But the general pacification was still incomplete, as France and the Holy Roman Empire continued the war, albeit somewhat languidly. It was not long, however, before Charles VI realized how inadequate were his forces, unsupported by those of Great Britain and of the Dutch Republic, to meet the armies of France, and towards the close of 1713 he was for the first time seriously inclined to consider conditions of peace. Accordingly, his representative, Prince Eugène, met the French Maréchal Villars at Rastatt in November 1713, and here, after negotiations had been broken off and again resumed, peace was made on 7 March 1714, Charles VI concluding the treaty without waiting for the assent of the different states of the Empire. This consent, however, was necessary, and a little later the representatives of some of the princes of the Empire met those of France at Baden, where, on 7 September 1714, the treaty of Baden, the last of the treaties included in the general peace of Utrecht, was signed. This dealt entirely with the question of the frontier between France and the Empire, which was restored as it was before the outbreak of the war except that France gained Landau.

One important matter dealt with at Utrecht remains to be mentioned. A second barrier treaty between Great Britain and the Dutch Republic was signed on 30 January 1713, and a third treaty signed at Antwerp on 15 November 1715 clinched the matter. Seven fortresses were to be garrisoned by a total of 35,000 men, three-fifths of the cost being borne by the imperial government and the remainder by the Dutch Republic.

The treaty of Utrecht is second to none in importance in British history. Its provisions were a most potent factor in assisting the expansion of the colonial empire of Great Britain and also in the building up of the commercial greatness of the country. In the domestic politics of the 18th century, too, the peace has a great and recurring importance. Its terms were bitterly assailed by the Whigs, and after the accession of George I, four of its Tory authors, Bolingbroke, Oxford, Ormonde and Strafford, were impeached for concluding it, the charges brought against them being that they had corresponded with the queen's enemies and had betrayed the honour and interest of their own country, while the abandonment of the Catalans was not forgotten.

This article is mainly a reproduction of texts from the following books which are now in the public domain: