The regiment was raised by Prince Friedrich August Duke Braunschweig-Lüneburg, bishop of Osnabrück, in accordance with a decree signed on 31 December 1684, and taken in the Imperial service.

The regiment was disbanded in 1768 (at that time, it was known as the "Johann Wilhelm Baron Kleinholdt Cuirassiers"). Its carabiniers were integrated in the newly raised First Carabinier Regiment "Albert Herzog zu Sachsen-Teschen", the other squadrons were distributed among various cuirassier regiments.

In 1701, the regiment took part in the invasion of Northern Italy. On 9 July, it fought in the Combat of Carpi. On 1 September, it took part in the Battle of Chiari, where it was deployed in third line between Chiari and the Trenzano stream, facing east.

In 1702, the regiment campaigned in Italy once more. On 30 June, it distinguished itself in an engagement near Buscoldo. Led by Lieutenant-Colonel Count Arberg, it defended itself against a largely superior enemy. On 15 August, it took part in the Battle of Luzzara, where it formed part of the left column.

In June 1703, the regiment took part in the defence of Ostiglia. At the end of December, three squadrons accompanied FZM Starhemberg in his epic march towards Piedmont.

On 4 January 1704, while still on the march towards Piedmont, three squadrons of the regiment took part in an engagement at Stradella. On 11 January, it fought in the combat of Castelnuovo di Bormida. Throughout the year, the remaining three squadrons campaigned in Lombardy, and later in Tyrol.

In 1705, the 3 squadrons stationed in Piedmont fought near Cassano and Madonna della Balzola.

On 7 September 1706, the 3 squadrons stationed in Piedmont took part in the decisive Battle of Turin.

In 1707, the regiment took part in the conquest of the Kingdom of Naples and in the capture of Capua. 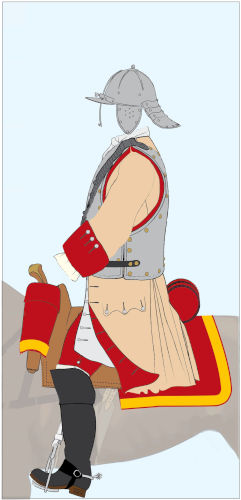 In the Austrian Cuirassier regiments, kettle drummers and trumpeters were dressed according to the regiment owner's tastes.