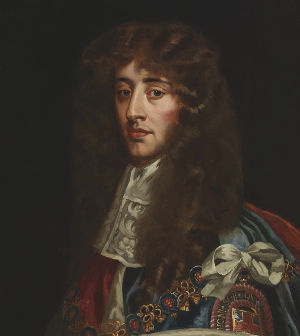 James FitzJames was the natural son of James, Duke of York, afterwards James II of England, by Arabella Churchill (1648-1730), sister of the Duke of Marlborough. He was born at Moulins (Bourbonnais) on 21 August 1670.

James FitzJames received his education in France at the hands of the Jesuits, and at the age of fifteen, his father having succeeded to the throne, he was sent to learn the business of a soldier under the famous general of the empire, Charles of Lorraine. In 1686, he served his first campaign in Hungary, and was present at the siege of Buda.

James FitzJames then returned to England, was made a colonel of the 8th Foot

In 1687, James FitzJames was created Duke of Berwick, Earl of Teignmouth and Baron Bosworth. He then went out afresh to Hungary. On 12 August 1687, the Duke of Berwick was present at the Battle of Mohacz.

On his return to England, the Duke of Berwick was made Knight of the Garter, colonel of the 3rd troop of horse guards (Royal Regiment of Horse aka The Blue) and governor of Portsmouth, but soon afterwards the revolution of 1688 forced him to flee to France.

In 1689, the Duke of Berwick served under James II in the campaign in Ireland, and, on 12 July 1690, was present at the Battle of the Boyne during which he led a charge, was unhorsed and almost killed in the melee. When his father departed for France after the Boyne, Berwick remained with the Jacobite Irish Army as commander-in-chief during the retreat to Limerick. On 22 June 1691, Berwick was present at the Battle of Aughrim. He then took part in the unsuccessful defence of Limerick.

The Duke of Berwick then took service in the French army, fought under Maréchal Luxembourg in Flanders. In 1692, it took part in the Battle of Steenkerque; and in 1693, in the Battle of Landen, where he was taken prisoner. He was, however, immediately exchanged for the Duke of Ormond, and afterwards he served under Villeroy.

In 1700, the Duke of Berwick married Anne Bulkeley.

In 1702, during the War of the Spanish Succession (1701-13), the Duke of Berwick served as a lieutenant-general. He was then naturalized as a French subject in order to be eligible for the marshalate.

In May 1703, during the Campaign in the Low Countries, the Duke of Berwick, who had supervised the capture of Tongres, was charged to demolish its fortifications.

In 1704, the Duke of Berwick took command of the French army in Spain. He led the unsuccessful invasion of Portugal. So highly was he now esteemed for his courage, abilities and integrity, that all parties were anxious to have him on their side. His tenure of the command was, however, very short, and after one campaign he was replaced by the Maréchal de Tessé.

In 1705, the Duke of Berwick commanded against the Camisards in Languedoc, and when on this expedition he is said to have carried out his orders with remorseless rigour.

At the end of 1705, the Duke of Berwick undertook the second siege of Nice. On 5 January 1706, the city surrendered. On 15 February, Berwick was promoted to maréchal de France for his conduct at Nice. In the same year he returned to Spain as commander-in-chief of the Franco-Spanish armies.

On 25 April 1707, the Duke of Berwick won the great victory of Almansa, where an Englishman at the head of a French army defeated Ruvigny, Earl of Galway, a Frenchman at the head of an English army. The victory established Philip V on the throne of Spain. Berwick was made a peer of France by Louis XIV, and duke of Liria and of Xereca and lieutenant of Aragon by Philip. Thenceforward Berwick was recognized as one of the greatest generals of his time, and successively commanded in nearly all the theatres of war.

From 1709 to 1712, the Duke of Berwick defended the south-east frontier of France in a series of campaigns which, unmarked by any decisive battle, were yet models of the art of war as practiced at the time.

On 11 September 1714, the last great event of the War of the Spanish Succession was the storming of Barcelona by Berwick, after a long siege.

In 1717, the Duke of Berwick was appointed military governor of the province of Guyenne, in which post he became intimate with Montesquieu.

In 1718, at the outbreak of the War of the Quadruple Alliance (1718-20), the Duke of Berwick found himself under the necessity of once more entering Spain with an army; and this time he had to fight against Philip V, the king who owed chiefly to Berwick’s courage and skill the safety of his throne. One of Berwick’s sons, known as the duke of Liria, was settled in Spain, and was counselled by his father not to shrink from doing his duty and fighting for his sovereign.

Many years of peace followed this campaign, and Maréchal Berwick was not again called to serve in the field till 1733 when the War of the Polish Succession (1733-35) broke out. He advised and conducted the siege of Philippsburg, and while the siege was going on was killed by a cannon-shot on 12 June 1734.