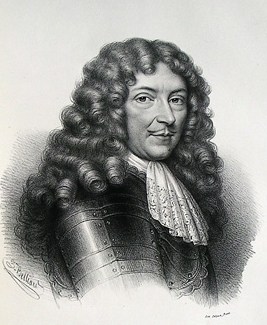 Nicolas de Catinat was born in 1637. He was the son of Nicolas II de Catinat, a magistrate at the parliament in Paris, and Catherine Poisle.

In 1667, during the War of Devolution (1667-68), Catinat distinguished himself at the Siege of Lille and was promoted to lieutenant in the Gardes Françaises.

In May 1679, Catinat led a detachment who abducted the Count Mattioli in Turin, secretary of the Duke of Mantua.

In 1680, Catinat was promoted to maréchal-de-camp (quartermaster).

In 1686, Catinat was promoted to lieutenant-general.

During the Nine Years’ War (1688-97), in September and October 1688, Catinat took part in the Siege of Philippsbourg. On 18 August 1690, he commanded the French army who won the Battle of Staffarda. He then made himself master of Saluzzo and Susa in Piedmont. On 4 October 1693, Catinat won another victory at the Battle of Marsaglia near Turin.

On 27 March 1693, in recognition for his services, Catinat was promoted to maréchal de France.

In 1701, at the outbreak of the War of the Spanish Succession (1701-13), Catinat was appointed second-in-command of the Army of Italy. On 4 April, arrived in Turin to act as second-in-command of the Duke of Savoy who had been appointed commander-in-chief of the French, Spanish and Piemontese troops for the coming campaign in Northern Italy. On 7 April, Catinat arrived in Milan where he assumed command till the Duke of Savoy would join the army. He was seconded by the Prince de Vaudémont, the Spanish governor of Milan. On 10 April, Catinat resolved to occupy the passages between the Adige and Lake Garda and to throw a bridge of boat on the Adige to ease manoeuvres on both banks. On 13 April, Catinat and Tessé left Milan to inspect their future positions. On 16 April, Catinat established his headquarters at Castiglione. On 6 May, Catinat moved his headquarters at Rivoli. On 15 May, Catinat was informed that the Imperialists were building a large number of boats and rafts at Rovereto. He immediately gave orders to concentrate his Franco-Spanish army at Goito. Between 26 and 28 May, an Imperialist army under Prince Eugène de Savoie passed the Alps and entered into Northern Italy. Catinat was completely surprised, for he had counted upon Venetian neutrality. By 22 June, Catinat, was still convinced that the Imperialists intended to pass the Po and to march southwards against the Kingdom of Naples. In the night of 8 to 9 July, Eugène crossed the Canalbianco. On 9 July, he defeated an advanced corps of Catinat's army in the Combat of Carpi. Catinat sought refuge behind the Mincio. On 28 July, Eugène's army crossed the Mincio at Salionze and Catinat fell back to the Oglio. In mid-August, Catinat retreated behind the Adda. King Louis XIV then decided to replace him by the Marshal de Villeroy. On his arrival, Catinat remained with the army as Villeroy's second-in-command for the rest of the campaign.

For the campaign of 1702, Catinat was appointed commander-in-chief of the French Army of the Rhine. On 26 April, Marshal Catinat, now old and worn out, arrived in Strasbourg to take command of the army. As in the previous campaign, he acted timidly in front of the Margrave Louis of Baden's Imperial army who occupied Wissembourg and Lauterbourg and laid siege to Landau.

N.B.: the sections describing Catinat’s service from 1701 to 1702 are mostly derived from our articles depicting the various campaigns, battles and sieges.