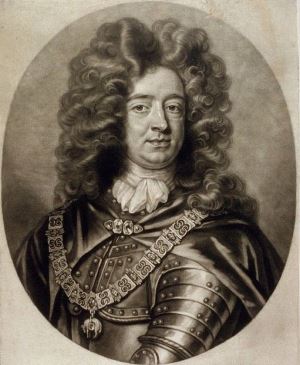 Georg was born in Darmstadt in 1669. He was the third son of the reigning Landgrave Ludwig VI of Hessen-Darmstadt and of Elisabeth Dorothea von Sachsen-Gotha.

In 1672, Duke Albrecht of Saxony, who was commanding a regiment in Dutch service, recruited a company in Hesse whose captaincy was given to the four years old Georg von Hessen-Darmstadt. Of course, he did not assume effective command of the unit.

In 1685, plans were made to raise a new Imperial regiment for Georg. The project was abandoned but Prince George himself was to enter imperial service as soon as he had accomplished the usual a "Grand Tour" through France, Switzerland and Italy to complete his education.

In 1687, Prince Georg entered in the Imperial service and took part in the campaign in Hungary against the Turks under the supervision of the Prince von Neuburg. On 12 August he fought in the Battle of Mohács with great courage. In September, he accompanied Elector Max Emanuel of Bavaria to Vienna and then returned to Darmstadt.

In 1688, several principalities of the Holy Roman Empire sent regiment to Dalmatia and Greece to support the Venetians in their war against the Turks. Prince Georg, now 19 years old, led a regiment composed of soldiers of his principality along with troops from Sachsen-Meiningen and raised in Württemberg to Venice and Greece. He took part in the storming of Negroponte. In 1689, the decimated German contingent returned to Venice.

In 1691, the Emperor appointed the young prince to be the proprietor of the Hanover Cuirassiers. Prince Georg was then supposed to march to Hungary with his new regiment. However, he could not resist to the invitation of the Prince of Orange to join him in his combat against the Jacobites in Ireland.

In 1692, Prince Georg returned to Vienna from where he hurried to Hungary. In 1693, he converted to the Catholicism.

In 1695, during the Nine Years' War (1688–1697), Prince Georg was sent to Spain at the head of a contingent of 2,000 German soldiers (Sachsen-Coburg Infantry under Colonel Kratz and Zweybrücken Infantry) to take part in the defence of Catalonia against French enterprises. He took part in the unsuccessful defence of Barcelona.

In 1697, Prince Georg was appointed viceroy of Catalonia.

In 1701, when the Bourbon Philip V became king of Spain, Prince Georg was replaced by Luis Antonio Tomás Fernández de Portocarrero as viceroy of Catalonia. He then returned to Austria where he took part in the negotiations with England and Portugal to gain their support to the claims Archduke Charles to the throne of Spain.

Prince Georg was soon appointed commanded of the Imperialist troops who were sent to Spain to support Archduke Charles' claims.

In January 1704, Prince Georg accompanied Admiral Sir George Rooke in an unsuccessful expedition against Barcelona. The fleet then returned to Lisbon. On 31 July, upon his own suggestion, 1,800 Dutch and English Marines were landed near Gibraltar. They took the fortress and defended it successfully against a Franco-Spanish siege. Allied reinforcements and supplies allowed Prince Georg to take the offensive and the siege was abandoned in April 1705.

In 1705, Prince Georg left Gibraltar and took command of a new expedition against Barcelona. On 13 September, he was killed during the storming of the citadel of Montjuich.

Prince Georg was buried in the Església dels Josepets de Gràcia. In 1711, his heart was sent to Darmstadt, where it remains in the Stadtkirche today.