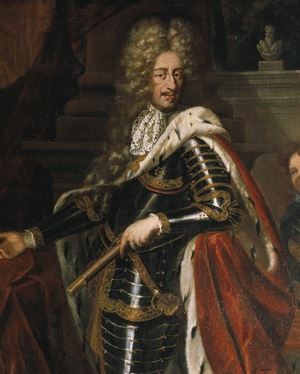 Leopold, the second son of the Emperor Ferdinand III and his first wife Maria Anna, daughter of Philip III of Spain, was born on 9 June 1640. Intended for the Church, he received a good education, but his prospects were changed by the death of his elder brother, the German King Ferdinand IV, in July 1654, when Leopold became his father's heir.

In 1655, Leopold was chosen King of Hungary and in 1656 King of Bohemia, and in July 1658, more than a year after his father's death, he was elected emperor at Frankfort, in spite of the intrigues of Cardinal Mazarin, who wished to place on the imperial throne Ferdinand, Elector of Bavaria, or some other prince whose elevation would break the Habsburg succession. Mazarin, however, obtained a promise from the new emperor that he would not send assistance to Spain, then at war with France, and, by joining a confederation of German princes, called the league of the Rhine, France secured a certain influence in the internal affairs of Germany.

Leopold's long reign covers one of the most important periods of European history; for nearly the whole of its forty-seven years he was pitted against Louis XIV of France, whose dominant personality completely overshadowed Leopold. The emperor was a man of peace and never led his troops in person; yet the greater part of his public life was spent in arranging and directing wars.

The first war in which Leopold I engaged the empire was with Sweden, whose King Charles X found a useful ally in the prince of Transylvania, George II Rakocky, a rebellious vassal of the Hungarian crown. This war, a legacy of the last reign, was waged by Leopold as the ally of Poland until peace was made at Oliva in 1660.

In 1663, a more dangerous foe entered the lists. The Turks interfered in the affairs of Transylvania, always an unruly district, and this interference brought on a war with the Empire. By a personal appeal to the Diet at Regensburg, Leopold induced the princes to send assistance for the campaign; troops were also sent by France, and in August 1664 the great imperialist general, Montecucculi, gained a notable victory at St Gotthard. By the Peace of Vasvar, the emperor made a twenty years' truce with the sultan, granting more generous terms than his recent victory seemed to render necessary.

After a few years of peace began the first of three wars between France and the Empire. The aggressive policy pursued by Louis XIV towards Holland had aroused the serious attention of Europe, and steps had been taken to check it. Although the French king had sought the alliance of several German princes and encouraged the Turks in their attacks on Austria the emperor at first took no part in this movement. He was on friendly terms with Louis, to whom he was closely related and with whom he had already discussed the partition of the lands of the Spanish monarchy; moreover, in 1671 he arranged with him a treaty of neutrality.

In governing his own lands Leopold found his chief difficulties in Hungary, where unrest was caused partly by his desire to crush Protestantism. In 17671, a rising was suppressed and for some years Hungary was treated with great severity.

In 1672, however, Leopold was forced to take action against France. He entered into an alliance for the defence of Holland and war broke out; then, after this league had collapsed owing to the defection of the Elector of Brandenburg, another and more durable alliance was formed for the same purpose, including, besides the emperor, the King of Spain and several German princes, and the war was renewed. At this time, twenty-five years after the Peace of Westphalia, the Empire was virtually a confederation of independent princes, and it was very difficult for its head to conduct any war with vigour and success, some of its members being in alliance with the enemy and others being only lukewarm in their support of the imperial interests. Thus this struggle, which lasted until the end of 1678, was on the whole unfavourable to Germany, and the advantages of the Treaty of Nijmegen (February 1679) were with France.

In 1681, after another rising in Hungary, some grievances were removed and a less repressive policy was adopted, but this did not deter the Hungarians from revolting again.

Early in 1683, espousing the cause of the Hungarian rebels, the sultan sent an enormous army into Austria; this advanced almost unchecked to Vienna, which was besieged from July to September, while Leopold took refuge at Passau. Realizing the gravity of the situation somewhat tardily, some of the German princes, among them the Elector of Saxony and the Elector of Bavaria, led their contingents to the imperial army which was commanded by the emperor's brother-in-law, Charles, Duke of Lorraine, but the most redoubtable of Leopold's allies was the king of Poland, John Sobieski, who was already dreaded by the Turks. On 12 September 1683, the allied army fell upon the enemy, who was completely routed, and Vienna was saved.

Meanwhile, almost immediately after the conclusion of peace with France, Louis had renewed his aggressions on the German frontier. Engaged in a serious struggle with Turkey, the emperor was again slow to move, and although he joined a league against France in 1682 he was glad to make a truce at Regensburg two years later.

In 1686 the League of Augsburg was formed by the emperor and the imperial princes, to preserve the terms of the treaties of Westphalia and of Nijmegen. The whole European position was now bound up with events in England, and the tension lasted until 1688, when William of Orange won the English crown and Louis invaded Germany. In May 1689 the grand alliance was formed, including the emperor, the kings of England, Spain and Denmark, the Elector of Brandenburg and others, and a fierce struggle against France was waged throughout almost the whole of western Europe. In general the several campaigns were favourable to the allies, and in September 1697, England and Holland made peace with Louis at Ryswick. To this treaty Leopold refused to assent, as he considered that his allies had somewhat neglected his interests, but in the following month he came to terms and a number of places were transferred from France to Germany.

While Leopold was engaged against France in the West, Leopold continued to fight the Turks in the East. The imperialists, among whom Prince Eugène de Savoie was rapidly becoming prominent, followed up the victory in front of Vienna with others, notably one near Mohacz in 1687 and another at Zenta in 1697, and in January 1699 the sultan signed the Treaty of Karlowitz by which he admitted the sovereign rights of the House of Habsburg over nearly the whole of Hungary. Before the conclusion of the war, however, Leopold had taken measures to strengthen his hold upon this country. In 1687 at the Diet of Pressburg the constitution was changed, the right of the Habsburgs to succeed to the throne without election was admitted and the emperor's elder son Joseph was crowned Hereditary King of Hungary.

The peace with France lasted for about four years and then Europe was involved in the War of the Spanish Succession. The King of Spain, Charles II, was a Habsburg by descent and was related by marriage to the Austrian branch, while a similar tie bound him to the royal house of France. He was feeble and childless, and attempts had been made by the European powers to arrange for a peaceable division of his extensive kingdom. Leopold refused to consent to any partition, and when in November 1700 Charles died, leaving his crown to Philip, Duc d'Anjou, a grandson of Louis XIV, all hopes of a peaceable settlement vanished. Under the guidance of William III, a powerful league, the Grand Alliance, was formed against France; of this the emperor was a prominent member, and in 1703 he transferred his claim on the Spanish monarchy to his second son, Archduke Charles. The early course of the war was not favourable to the imperialists, but the tide of defeat had been rolled back by the great victory of Blenheim before Leopold died on 5 May 1705.

During Leopold's reign some important changes were made in the constitution of the Empire. In 1663 the Imperial Diet entered upon the last stage of its existence, and became a body permanently in session at Regensburg; in 1692 the Duke of Hanover was raised to the rank of an elector, becoming the ninth member of the electoral college; and in 1700 Leopold, greatly in need of help for the impending war with France, granted the title of King of Prussia to the Elector of Brandenburg. The net result of these and similar changes was to weaken the authority of the emperor over the members of the Empire, and to compel him to rely more and more upon his position as ruler of the Austrian archduchy and of Hungary and Bohemia, and Leopold was the first who really appears to have realized this altered state of affairs and to have acted in accordance therewith.

The emperor was married three times. His first wife was Margaret Theresa (d. 1673), daughter of Philip IV of Spain; his second Claudia Felicitas (d. 1676), the heiress of Tyrol; and his third Eleanora, a princess of the Palatinate. By his first two wives he had no sons, but his third wife bore him two, Joseph and Charles, both of whom became emperors. He had also four daughters.

Leopold was a man of industry and education, and during his later years he showed some political ability. Extremely tenacious of his rights, and regarding himself as an absolute sovereign, he was also very intolerant and was greatly influenced by the Jesuits. In person he was short, but strong and healthy. Although he had no inclination for a military life he loved exercises in the open air, such as hunting and riding; he had also a taste for music.