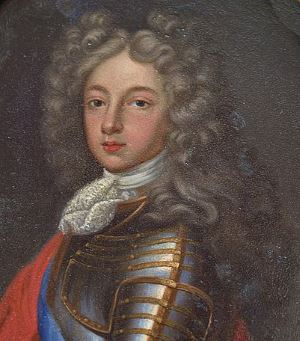 Philippe was born at Versailles on 19 December 1683. He was the second son of the French Dauphin Louis and his wife, Maria Anna, daughter of Ferdinand Maria, Elector of Bavaria. He was also the grandson of King Louis XIV of France.

Philippe shared in the careful education given to his elder brother, Louis, Duc de Bourgogne, by Fénélon, and was himself known as Duc d'Anjou. Philip was by nature dull and phlegmatic. He had learnt morality from Fénélon's teaching, and showed himself throughout his life strongly adverse to the moral laxity of his grandfather and of most of the princes of his time.

In 1700, on the extinction of the male line of the House of Habsburg in Spain he was named heir by the will of Charles II. Immediately, Emperor Leoplod I declared that he did not recognise the will of Charles II and that the rightful heir was Archduke Charles of Habsburg. On 24 November 1700, Philippe was proclaimed King of Spain in Madrid under the name of Philip V (Felipe V). On 4 December, Philip left Versailles for Madrid.

On 22 January 1701, Philip V arrived in Madrid. The same year, the War of the Spanish Succession, which was to last till 1713, broke out in Italy where an Imperialist army under Prince Eugène de Savoie marched from Tyrol and threatened the duchies of Milan and Mantua, defended by a Franco-Spanish army. On 2 November, Philip V married Maria Louisa of Savoy who strongly influenced him.

During the War of the Spanish Succession, Philip V showed courage on the field of battle, both in Italy and Spain, and was flattered by his courtiers with the title of El Animoso, or the spirited. But he had no taste for military adventure.

In June 1702, Philip V sailed for Italy where he disembarked at Savone near Genoa to join the Franco-Spanish army operating in Northern Italy and to assume command, seconded by Marshal Vendôme. On 18 June, Philip V reached Milan where he sojourned. On 1 July 1, he went from Milan to Lodi under a strong escort. On 3 July, he arrived at Cremona. From mid-July, Philip directed the initial phase of the offensive on the right bank of the Po and, on 15 August, took part in the indecisive 1702-08-15 – Battle of Luzzara. On October 2, informed that an Anglo-Dutch amphibious force had undertaken the Siege of Cádiz, Phlip V decided to return to Spain and left the camp of Luzzara. On October 6, he arrived in Milan. In the first days of November, he re-embarked at Finale for Spain.

In February 1714, Philip's wife, Maria Louisa died. In December, he remarried with Elizabeth Farnese of Parma, who would survived him.

If Philip V had a strong passion, it was to provide for his succession to the throne of France, if his nephew, Louis XV, should die, and he indulged in many intrigues against the House of Orléans, whose right to the succession was supposed to be secured by Philip's solemn renunciation of all claim to the French throne, when he became King of Spain.

In 1724, in pursuit of one of these intrigues, Philip V abdicated in favour of his son Louis. But Louis died in a few months, and Philip returned to the throne.

At a later period Philip tried to abdicate again, and his wife had to keep him in a species of disguised confinement.

Throughout his life, but particularly in the later part of it, Philip was subject to prolonged fits of melancholia, during which he would not even speak.