Since medieval times, the Duchy of Savoy had a unit of Gendarmi (Gens d'Armes), known as the “Cavalleria dello Stato” (aka Cavalleria Paesana). The organisation and strength of this unit fluctuated through time but it was always formed from men of the regions of Piedmont and Savoy. Every village had to provide a number of young men with horses. By the end of the 16th century, this units consisted of two squadrons.

On 24 March 1691, during the Nine Years’ War (1688-1697), Duke Victor Amadeus II called the “Squadrone di Piemonte”, belonging to the Cavalleria dello Stato, to the army. This squadron consisted of 8 companies of Gens d'Armes, coming from all regions of the duchy. These companies were organised in two brigades:

On 23 July 1692, in Turin, the Cavalleria dello Stato was reorganised in two regiments of cavalry, the “Reggimenti d'Ordinanza”. The Gens d'Armes from the eight disbanded companies formed the kernel of the new regiments, which each consisted of 9 companies (50 men each). These new regiments were initially known by the name of their colonel. In the case of the present regiment, “Reggimento di Piossasco.” However, the name of this regiment was soon changed to “Reggimento di Cavalleria Savoia,” its troops coming from the Duchy of Savoy. In wartime, the regiment was organised in 3 squadrons of 2 companies each, and 1 squadron of 3 companies, for a total of 9 companies (initially Colonnella, Luogotenente Colonnella, d’Agliano, Quarto, d’Albenas, Faverages, Boglio, Borgaro, and Saint-Hyppolite).

In 1701, the Savoyard Army was subdivided in two contingents. The four squadrons of the regiment were part of the contingent that remained in Piedmont. In December, it took up its quarters in Turin.

In 1702, one squadron was left behind in Turin and the three others were attached to the Savoyard Contingent sent to assist the Franco-Spanish army in Northern Italy. On 15 August, these 3 squadrons were present at the Battle of Luzzara. The regiment took an active part in the battle, launching furious charges against the Imperialists and stopping them.

In May 1703, the 5 squadrons of the regiment (480 men) were part of the contingent sent to assist the Franco-Spanish army in Northern Italy under the Duc de Vendôme.

By 25 September, the regiment was encamped near San Benedetto and counted 5 officers and 307 men fit for duty; 2 officers and 109 men sick; 3 officers (Count Renato Birago di Borgaro, Captain Count Vittorio Amedeo Piossasco di Vilre and Cornet Cav. Cambiano) and 27 men detached; and 3 officers and 8 men absent. The regiment was under the command of Colonel Antonio Turinetti di Pertengo, Captain Marquis di San Damiano and Cornet Cav. Francesco Luigi Vettier. On 29 September, when the Duke of Savoy changed allegiance, the French captured the entire regiment, including all officers present at San Benedetto. The prisoners were sent to the camps of Pizzighettone, Lodi and Pavia; and the sick were sent to Cremona. However several of these men managed to escape during the transfer. They were greatly assisted by the tree officers, who had been absent when the regiment was captured.

In fact, in October and November, a large number of prisoners were able to escape and to return to Piedmont. By mid-November, four 4 companies (2 squadrons) had been reformed.

In February 1704, the regiment incorporated four “Savoyard Cavalry Companies” (probably volunteers) arriving from Savoy, which was occupied by the French. With these new companies, the regiment was considered ready. It consisted of:

In April, 200 men of the regiment were in Vercelli. In June, the regiment left Vercelli two days before the siege started (just some sick were left in the town during the siege) and moved towards Crescentino, and later Verolengo, Branddizzo and Settimo Torinese.

On 21 May 1705, the regiment (10 companies, each of 60 men) started the campaign in Piedmont on the front extending from Crescentino to Chivasso to support the defence of Verrua. In June and July, during the Siege of Chivasso, it remained encamped around the Brandizzo, ready to intervene to sustain the entrenched camp on the hills behind Chivasso. At the end of the siege of Chivasso, the regiment – together with Piemonte Reale Cavalleria – were the regiments with the highest number of losses (16 men).

On 12 May 1706, the French Army advanced from Chivasso towards Turin to lay siege to the capital of the Duchy of Savoy. The cavalry, which tried to contain the French, slowly withdrew in front of the huge French Army that then passed the Stura River. Some cavalry units broke down the bridges over the Dora River and took refuge in the town of Collegno, close to Turin.

In the first phase of the siege Allied cavalry troops (in general) were split. One part still operated mounted and made some raids towards Crocetta, while another part (528 men contributed by all cavalry regiments) remained in the bastions of Turin (378 men) or served the cannon (150 men).

The regiment participated in the raids that the Duke did around Turin. Between 20 and 22 May, it took part in raids where 500 Savoyard horse (including a detachment of the present regiment) clashed with French cavalry and won.

On 17 June, the Duke with all the cavalry (excluding the 528 aforementioned men) left Turin and took position at Cherasco to make a series of raids, hoping to draw the French away from Turin.

Another very important episode happened on 7 July in front of the town of Saluzzo. The French wanted to catch up with the forces of the Duke. To do so, they tried to pass the Varaita River with 40 squadrons, 5 battalions and 40 cannon. However, the Savoyards had destroyed the bridges and only the French cavalry was able to pass the river near Borgo Duomo. As the first columns of French horse appeared, a detachment of the Piemonte Reale Cavalleria under the command of the Marquis Birago, which had been left behind to guard the passage, attacked the French. This violent attack forced the French to dismount 500 dragoons of General Perceux, who tried to open a passage through the Piemonte Reale Cavalleria at the point of the bayonet. The troopers of the Piemonte Reale Cavalleria fell back and barricaded themselves in Borgo Duomo, fighting for three hours, house by house. Meanwhile, 15 French squadrons under General Mauroy manoeuvred to outflank Borgo Duomo. The Count Birago then decided to retreat, supported by the rest of the regiment under Count Vittorio Piossasco di Virle. Heavy fighting ensued but the regiment managed to retreat towards Borgo Sant'Agostino where the Duke had left 2 Imperial squadrons. A total of 600 Allied horse now stood in Borgo Sant'Agostino, where they were attacked by the French brigade of General Savine. At this point, the duke decided to come to the relief of the Piemonte Reale Cavalleria with the present regiment. He managed to drive back the French towards Saluzzo and to relieve the courageous regiment. In this action, the Savoyards lost 47 men killed and 30 wounded.

On 7 September, 4 squadrons of the regiment (the fifth squadron was inside the town to serve on the bastions) fought in the Battle of Turin, where they were deployed in the second line of the cavalry left wing, in the Brigade commanded by Brigadier General Tornon, along with the Imperial Pferrerkorn Cuirassiers (5 squadrons). Along with other Savoyard troops, the regiment attacked the French at Madonna di Campagna; and here a curious episode happened. While the Duke was waiting for news of the events over there, he saw a cavalryman coming towards him, his neck was covered with blood of a sabre cut and everyone was convinced that he was bringing bad news. However, Victor Amadeus II recognized the uniform of the present regiment and said “Savoie, bonnes nouvelles” and in fact it was so. This became also the motto of the regiment still carried up to present-days. And because of the blood covering the neck of the cavalryman, the white neck stock became red, as ordered by the Duke (the regiment is still proudly carrying a red scarf).

In 1707, the regiment did not take part directly in the unsuccessful siege of Toulon, but remained behind under the command of the Imperial General Visconti to protect the line of communication between the main army and Piedmont. At the end of the campaign, the regiment, along with the Piemonte Reale Cavalleria, covered the retreat of the main army and was involved in several rearguard actions.

In 1708, the Allied cavalry was split into 4 groups: the first in Susa, the second in Val d’Aosta, a third in Bussoleno (opposite Sura) and a fourth in Orbassano (just west of Turin). The present regiment (633 men and 632 horses) was in Orbassano, operating in that zone as rearguard. By May, it was composed of:

In 1711, the regiment, together with the Dragoni di Sua Altezza Reale and the Dragoni di Genevois took part in the invasion of Savoie and in the capture of Conflans. On 12 July, they reached Annecy and Chambéry, the capital of Savoie, preparing to advance up to Montmélian.

In 1712, the Duke of Savoy penetrated into France at the head of an army. The regiment was part of the vanguard (3,000 horse). A French columns counterattacked at Valvaraita, heading towards Saluzzo. On 12 September, the French surprised part of the Savoyard cavalry, near Villanovetta. These squadrons were forced to retire but soon the present regiment, along with a few squadrons of the Piemonte Reale Cavalleria came to the rescue and counterattacked under the command of Major d'Alinges d'Aspremont. In a brief and violent encounter they drove the French back to France. In this action, the Savoyard lost 8 men killed and 20 wounded.

In 1713, the regiment was reduced from 10 to 8 companies organised in 4 squadrons, 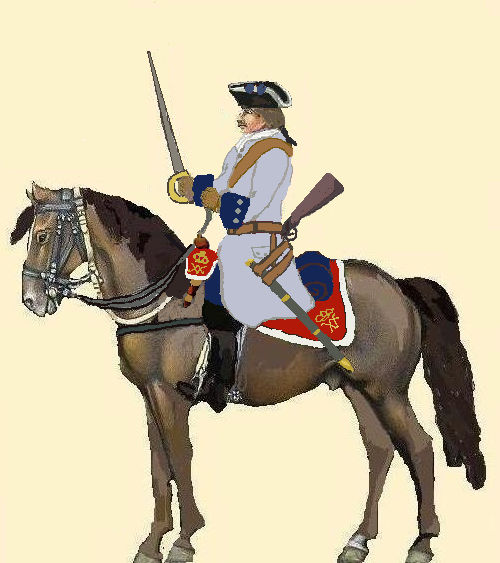 NCOs wore uniforms very similar to those of common troopers with laced buttonholes at the cuffs and on the breast.

Uniforms of officers differed from those of the privates and NCOs by the finer material used. Cuffs, lapels and pockets were edged with a wide gold or silver braid and buttonholes were laced gold or silver. 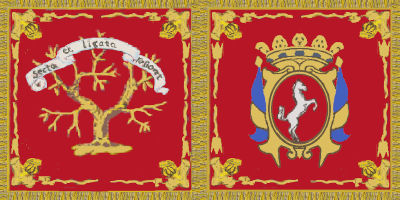 Michele Savasta Fiore for the initial version of this article (including the uniform plates and the standard).