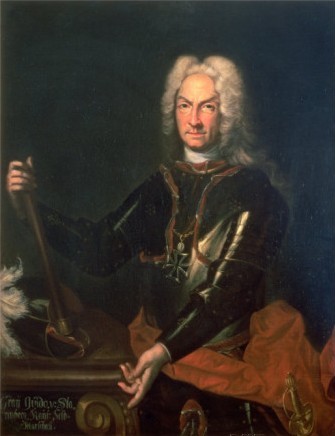 Some historians consider Guido Count Starhemberg as one of the most prominent personages of the Austrian Army, comparable to Prince Eugène de Savoie.

Guido was born on 11 November 1657 in Graz in Austria as second son of Bartholomäus Count Starhemberg and Esther Baroness Windischgrätz. Guido was initially destined for a clerical career. Accordingly, he studied for eight years with the Jesuits in Linz. However, he was more interested by a military career.

In 1677, Guido finally joined the Imperial Army, volunteering as private in the regiment of his cousin Rüdiger Count Starhemberg. Guido campaigned on the Rhine in the army of Duke Karl von Lothringen.

Guido soon served as ensign in Captain Streif's company. He distinguished himself in a combat where he had two horses killed under him and was wounded at the right foot. For his courage, Guido was promoted to lieutenant. He took part in the defence of Ofen.

In 1680, after the Peace of Nijmegen, Guido's regiment was sent to Moravia and Silesia to protect them from incursions launched by Thököly from Hungary.

In 1683, during the siege of Vienna 1683 by the Turks, Guido Count Starhemberg, now captain, served as adjutant to his cousin Rüdiger who acted as military commander in the heroic defence the city. Just at the beginning of the siege, Guido saved the city from a big disaster. Fire had broken out in a powder magazine located in the Schottenhof. Captain Starhemberg managed to extinguish the fire and destroyed the wooden corridor leading to the burning magazine. On 19 July, Guido and Captain Steinbach received orders to prepare a sortie which they successfully conducted, killing many Turks, filling the trenches and taking several Janissaries prisoners. Guido took part in other sorties and was severely wounded during the main Turkish attack against the walls. In the heavy fighting on 24 August, Lieutenant-Colonel Baron Kotulinsky was mortally wounded, Guido Count Starhemberg was promoted to lieutenant-colonel to succeed him. After suffering a second heavy injury, Guido was transported by ship to Vienna for recovery. After the relief of Vienna, Guido spent the winter in the city.

On 24 May 1684, Guido left Vienna to join the army assembling in Hungary for the incoming campaign. He then took part in the unsuccessful siege and battle of Ofen (present-day part of Budapest) where he was wounded once more.

On 7 July 1685, Guido Count Starhemberg was promoted to colonel and proprietor of the then vacant Spinola Infantry (later on No. 35). On 10 July he was ordered to reconnoitre the Fortress of Neuhäusel (present-day Nové Zámky) to determine the best places to establish batteries. On 16 August, he was at the battle of Gran.

From June to September 1686, Guido took part in the siege and capture of Buda.

In 1687, Starhemberg was at the siege of Esseg (present-day Osjek/HR) where he was wounded by an arrow in the left shoulder and a musket shot in a leg whereupon he was appointed commander of Klausenburg (present-day Cluj/RO).

In 1688, Starhemberg left Klausenburg and participated in the siege of Belgrade. On 4 September, he was buried in a trench after explosion of some powder stockpile. His soldiers rescued him. After the surrender of Belgrade, he was appointed commander of the city. The commander of Imperial army, Margrave Ludwig von Baden want to have him among his staff, therefore Guido left and joined the main army. He distinguished himself in the Battle of Nissa.

On 26 July 1689, Guido Count Starhemberg was promoted to General-Feldwachtmeister (GFWM).

In 1690, Guido was appointed commander of Esseg, besieged by the Turks.

On 19 August 1691, during the Battle of Slankamen, Guido Count Starhemberg was wounded once more by a Turkish arrow. Two months later, along with the Brandenburger General von Barfuß, he laid siege to the Fortress of Grosswardein (present-day Oradea/RO).

On 13 July 1692, Guido Count Starhemberg was promoted to Feldmarschall-Lieutenant (FML) and sent to the assistance of the Elector of Trier who was facing the the French. The same year, Guido joined the Teutonic Order. During the winter, he commanded the Fortress of Ehrenbreitenstein near Koblenz.

In the spring of 1693, Guido returned to Hungary.

On 11 September 1697, at the Battle of Zenta, Guido Count Starhemberg commanded the left wing (first line 7 bns and 35 sqns under FML Corbelli, second line 5 bns and 13 sqns under FML Prince Vaudémont) of the Imperial army of Prince Eugène de Savoie. After the famous victory, Guido participated in a raid in Bosnia under Prince Eugène.

In 1699, after the signature of the Treaty of Karlowitz (present-day Sremski Karlovci/Slovenia), Guido Count Starhemberg returned to his estates (Deutsch-Orden Kommende) at Laibach (present-day Ljubljana/SL). 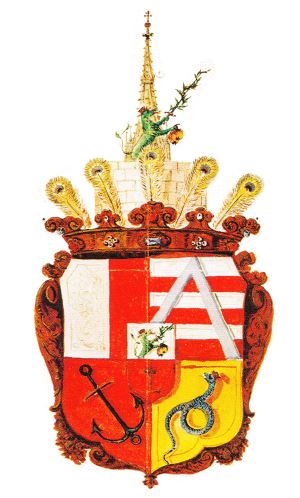 Arms of the House of Starhemberg – Source: Harald Skala's collection

In 1700, Guido Count Starhemberg was attached to the staff of Prince Eugène who was assembling an army in Tyrol.

In 1701, Guido Count Starhemberg took part in the invasion of Northern Italy where he fought against a Franco-Spanish army.

In 1702, Guido Count Starhemberg served in the Campaign in Northern Italy. On 1 February, he fought in the failed Storming of Cremona. He was later at the blockade of Mantua. On 15 August, he took part in the Battle of Luzzara.

In 1703, when Prince Eugène left for Vienna, Guido Count Starhemberg assumed command of the Army of Italy during his absence. In June, he relieved the Fortress of Ostiglio, besieged by a Franco-Spanish army under the command of the Duc de Vendôme.

In the winter of 1703-1704, Guido Count Starhemberg took his winter-quarters in Piedmont to prevent the junction of the armies of Vendôme and Elector Maximilian II Emanuel of Bavaria.

On 5 February 1704, Guido Count Starhemberg was promoted to Field-Marshal (FM). However, he was getting upset by the lack of support from Vienna since the departure of Prince Eugène.

In 1706, the Hofkriegsrat appointed FM Starhemberg commander of the Army of Hungary trying to quench Rákoczy's uprising. After the campaign, he spent winter in Vienna, recovering from his injuries. In fact, an arrowhead which he still had in his shoulder was removed.

In 1707 and 1708, FM Starhemberg continued to campaign in Hungary without much success. However, he managed to initiate negotiations with some key Hungarian magnates which, a few years later, eventually resulted in the Treaty of Szatmár (29 April 1711).

During this time, Archduke Charles had been fighting in the Iberian Peninsula since 1705. After the defeat of his army at the Battle of Almansa (25 April 1707), Charles's situation in Spain was critical. He then asked his brother, Emperor Leopold I for help and it was resolved to send Imperial troops to Spain to support him. Initially, it was planned to confide the command of this Imperial army to Prince Eugène but he was not enthusiastic to assume this command. Furthermore, Leopold I wanted to have him in Vienna. In this situation, FM Guido Count Starhemberg was finally appointed commander of the expeditionary corps (8,000 men).

On 30 April 1708, Starhemberg's expeditionary corps arrived in Barcelona. The general situation was quite difficult. Stanhope, the commander of the British troops, had received his own instruction and was not willing to coordinate his action with Starhemberg. Furthermore, the situation in Charles's Court in Barcelona was chaotic. FM Starhemberg could not prevent the Duc d'Orléans from occupying Tortosa.

On 27 July 1710, FM Starhemberg defeated a Spanish army in the Battle of Almenar and followed it up to Aragon. On 20 August, he won another brilliant victory at Saragossa. Charles, who accompanied him, entered into Saragossa afterwards. Unfortunately after this victory quarrels between the commanders prevented further coordinated actions against the French. Stanhope force march to Madrid resulted in a disaster. He initially besieged and captured Brihuega but FM Starhemberg could not make a junction with Stanhope's Army before, on 10 December, his own army was attacked and defeated by a Franco-Spanish army under the Duc de Vendôme in the Battle at Villaviciosa. Starhemberg's Army suffered heavy losses, he himself had 17 bullet holes in his uniform and his horse was killed under him. FM Starhemberg then retreated to Saragossa but was soon forced to retreat to Balaguer. Disappointed, FM Starhemberg went to Barcelona where he asked to be relieve of his command. Emperor Joseph I tried to persuade him to stay in Spain and he finally accepted, preparing the next campaign.

On 17 April 1711, Emperor Joseph I died. On 27 September, Archduke Charles left Barcelona and returned to Vienna to be crowned as Emperor of the Holy Roman Empire. His wife Elisabeth remained in Spain as governor under FM Starhemberg's protection. When Great Britain relinquished from its engagement in Spain, it became impossible for FM Starhemberg to continue in the war. Nevertheless, he was appointed general governor and Empress Elisabeth returned to Vienna.

On 14 March 1713, the Treaty of Utrecht was signed. On 26 June, FM Starhemberg left Barcelona. On 2 September, the last Imperial troops left Spain.

FM Starhemberg returned once more to his estates at Laibach and remained there in seclusion for some years.

In 1717, FM Starhemberg returned to Vienna where he lived in the house of the Teutonic Order.

In 1720, Starhemberg was appointed Landkomtur of the Teutonic Order (afterwards appointed Großkomtur).

FM Guido Count Starhemberg died on 7 March 1737 and was buried in the church of the Teutonic Order.

Guido Count Starhemberg was not married (the statute of the Teutonic Order did not allow marriage) but his connection to his family always remained strong. In September 1721, he constituted a foundation with 30.000 fl. Whose annual interests were given to three maids or widows of the Starhemberg family. In 17127, he constituted a second foundation 30.000 fl. for the second son of the family (secundogenitur) who could not benefit from Fideicommissum.

Once, Emperor Joseph I gave 10.000 fl. to Starhemberg in recognition of his merits but Starhemberg returned this sum as his own contribution to the war effort. Furthermore, Starhemberg erected at his own expense a pharmacy for sick soldiers of his regiment.

Starhemberg spoke 5 languages: German, Latin, Italian, French and Spanish. He liked hunting and was an excellent rider. He was courageous, very quiet, did not like long discussions. Guido Count Starhemberg fought in 30 campaigns (assuming command in 11 of them), participated in 20 battles and 30 sieges and was wounded approx. 20 times.