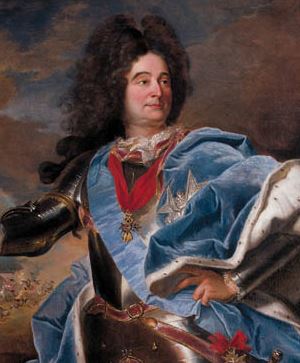 Villars was the son of Pierre de Villars, a diplomat.

In 1671, Villars entered the French Army through the corps of pages.

In 1673, during the Franco-Dutch War (1672–78), the Marquis de Villars served in the cavalry and distinguished himself by his daring and his resourcefulness. He was at the Siege of Maastricht. In 1674, after the Battle of Seneffe, he was promoted on the field to mestre de camp (colonel) of a cavalry regiment.

After the Franco-Dutch War, Villars undertook an unofficial mission to the court of Bavaria where he became the constant companion of Elector Maximilian II Emanuel with whom he took the field against the Turks and fought at Mohacs (12 August 1687).

In 1687, Villars was finally promoted to maréchal de camp. He had had to wait 13 years for this promotion in spite of a long record of excellent service under Turenne, Condé and Luxembourg, and of his aristocratic birth. Indeed his promotion had been but slow, for he had incurred the enmity of the powerful Louvois.

In 1690, during the Nine Years' War (1688–97), Villars returned to France and joined the Army of Flanders where he had the command of a cavalry corps.

After the war, Villars was appointed ambassador in Vienna.

In 1701, at the outbreak of the War of the Spanish Succession, Villars was recalled to France. By then he was lieutenant-general. He initially served under the Maréchal de Villeroy for the planned Operations in Germany. In August, when Villeroy was sent to replace Catinat and to put a stop to the Imperialist invasion of Northern Italy, Villars accompanied him. On 21 August, they arrived in Milan. Villars was placed under the command of the Prince de Vaudémont, the Spanish governor of Milan. On 18 November, Villars marched to Lodi at the head of a detachment (13 bns, 15 sqns). On 23 November, Villars (14 bns, 15 sqns) marched from the Adda to Pizzighettone to reinforce Villeroy's army. On 25 November, Villars reached Pizzighettone. On 27 November, he took position at San Savino.

In 1702, Villars served on the Rhine. On 4 August, he personally went from Metz to Thionville to assume command of a corps of 12 bns and 16 sqns arriving from Flander. In August, he marched from Thionville by Longeville-lès-Metz, Delme, Moyenvic and Saarbrücken where he waited for new instructions from Catinat. When Louis XIV realised that Villars was more inclined to act offensively than Catinat, he took dispositions to send him 10 additional bns who had been raised in the previous year. These reinforcements were expected at Metz at the beginning of September. Villars then marched by Phalsbourg to Saverne. At the end of August, Louis XIV informed Catinat that the Elector of Bavaria was on the verge of launching an offensive against Ulm and that the king had promised him assistance (up to 40 bns and 50 sqns) of a detachment of Catinat's army under the Marquis de Villars. On 25 September, Villars marched from Eckbolsheim to Erstein with the corps destined to the Elector of Bavaria. He had vainly tried to persuade Catinat to make a diversion on Hochfelden in the region of Haguenau. He then marched by Marckolsheim, Fessenheim to Huningue where he took dispositions to pass the Rhine, establishing a bridgehead on the right bank of the river. On 14 October, Villars won the Battle of Friedlingen. On 15 October, the French artillery cannonaded the Fort of Friedlingen. In the evening, Villars summoned the commander of the place once more and he capitulated. The same day, Villars detached M. de Biron with 3,000 picked men to locate the army of the Elector of Bavaria. Villars could not advance through the mountains without being sure to receive bread from the Elector of Bavaria. On 18 October, Villars encamped at Binzen. On 20 October, Villars was promoted to maréchal de France and received command of the Army of the Rhine. At the beginning of November, Villars had abandoned all hope of effecting a junction with the army of the Elector of Bavaria. The conduct of the latter getting more and more suspicious. Villars' army marched from Friedlingen towards the bridge at Neuenburg. Meanwhile, Villars at the head of 2,000 horse conducted a reconnaissance towards Freiburg im Brisgau where he received confirmation that the Imperial army was on the march towards Kappel-Grafenhausen. Villars feared that they would throw a bridge at Kappel-Grafenhausen where they had several boats. For this reason, he marched downstream along the Rhine. On 11 November, he decamped from La Wantzenau to take his cantonments in the area of Saverne where ample forages were still available. On 5 December, he started to send his army into its winter-quarters. On 27 December, Villars left Lorraine for Versailles. The same year, he married Jeanne-Angélique Rocque de Varengeville.

On 30 September 1703, Villars won the Battle of Höchstädt. Disappointed by the lack of military successes and by the failure of all attempts to draw the Circles of Swabia and Franconia out of the conflict, he proposed to Louis XIV to return to his old politic of devastation but the king rejected this idea.

In April 1704, Villars was sent to replace the Maréchal de Montrevel in his war against the Camisard insurgents in the Cévennes. By December he had quenched the insurrection.

In 1705, in recognition of his service in the Cévennes, Villars was admitted in the Ordre du Saint-Esprit and received the title of duke.

In 1709, Villars received the command of the French Army of Flander, facing the Allies led by Marlborough and Prince Eugène. During the famine of the winter, he shared the soldiers' miserable rations. When the campaign opened the old Maréchal Boufflers volunteered to serve under him. On 11 September, Villars was severely wounded during the sanguinary Battle of Malplaquet. The battle had been a Pyrrhic victory for the Allies which allowed Villars to tell Louis XIV: "If it please God to give your majesty's enemies another such victory, they are ruined."

No major battle took place during the campaigns of 1710 and 1711 without significant gains by the Allies.

At the end of 1711, Marlborough finally managed to pass the Ne plus ultra Lines and the power of the French defence seemed to be broken.

In 1712, the British contingent and Marlborough returned home and the Dutch and the Imperialists were left alone to face the armies of France. On 24 July 1712, Villars outmanoeuvred and decisively defeated Prince Eugène in the Battle Denain, thus saving France. Villars was then appointed Governor of Provence, a function that he retained till his death.

In 1713, the theatre of operation shifted to the Rhine and Villars captured the fortress of Landau and the the troops who stormed Freiburg. He then represented France during the negotiations who led to the Treaty of Rastatt.

In 1714, Villars was elected member of the Académie française.

During the Regency (1715–1723), Villars presided the War Council and was the main opponent of Cardinal Dubois.

In 1733, at the outbreak of the War of the Polish Succession (1733–1738), Louis V named Villars maréchal général des camps et armées du roi, a distinction that had not been granted since the death of Turenne.

N.B.: the section describing Villars' service in 1701 and 1702 is mostly derived from our articles depicting the various campaigns, battles and sieges.